Importing as much as 179,000 tons of steel, exporting grain and manufactured products. 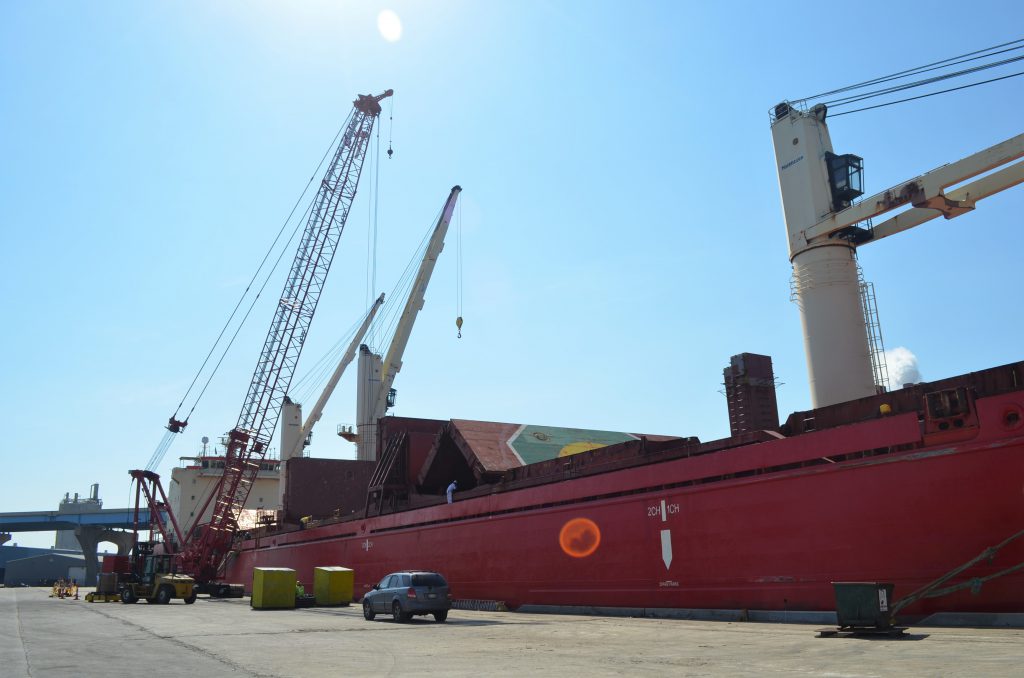 Last December, Port Milwaukee unloaded 5,000 tons of steel before the St. Lawrence Seaway closed off international trade at the end of the year, as we reported. The seaway reopened to international trade late last month and the Federal Mackinac dropped off thousands of tons of rolled steel along with six massive industrial freezers heading to a food processor in the Fox River Valley and to two yachts. Meanwhile the Isolda loaded up Wisconsin-grown grain at the COFCO silos in the Port’s inner harbor after dropping off more steel. News media were invited to the Port’s Terminal Two to see the steel unloaded from the Federal Mackinac.

The Federal Mackinac came all the way from Ijmuiden, Netherlands last Sunday. The Isolda came in last Friday. Port Milwaukee spokesperson Jeff Fleming explained that the rolled bundles of steel move from the ship to the nearby warehouse and then are shipped via train or truck to transportation companies or steel brokers who then give it to manufacturers to create any number of products.

Fleming said that in addition to steel the Port can see specialized steel products like ones used to create the new Bucks arena as well as exotic cars and tractors imported from abroad. As for exports, in addition to grain the Port also occasionally transports finished manufactured products like a mining shovel created by Caterpillar.

The owner of the Federal Mackinac, Fednav Ltd., has regularly scheduled service to Milwaukee, said Fleming. He also said that companies that provide raw materials for local manufacturers know they can source the raw material in Europe and reliably bring it through the Port.

All this steel coming into Milwaukee is a good sign for the city’s economy. “The fact that steel is in demand is an indication that Milwaukee’s manufacturing economy is stable if not strong,” Fleming said. He also explained that Port Milwaukee charges a fee for products that move through and as a result the investment that taxpayers make into the Port pays a dividend because there’s net revenue returned to the city’s tax coffers.

The export of grain is a good sign for the agricultural industry as well. Fleming noted that all the grain the Port exports is grown within a 90 mile radius of the city, which means local farmers are reaching international markets.

The arrival of the steel comes after President Donald Trump announced last March that his administration will impose a 25 percent tariff on steel imports. However, Fleming and Hirthe don’t believe this will impact the Port too much. “For all the talk of international steel tariffs, the users of Port Milwaukee anticipate keeping the same volume of steel going forward into 2018 that they saw in 2017,” Fleming said.

Fleming explained that while tariffs do impact international trade, at this stage it’s unclear what effect the tariffs will have on steel. Even if there is an additional cost, steel manufacturers and users of steel in Milwaukee anticipate roughly the same volume of steel coming through the port at least for the next year or so.

Hirthe said that much of the steel and other materials that they bring in from Europe are goods that are used for manufacturing in U.S. mills that are at full capacity. The only way to source the volumes they need is to go offshore. That being said, they’re bringing in steel at equal or a little higher cost because it was made in European mills already. So it’s complementary to the domestic manufactured goods. “You could raise the tariff even higher than it has been suggested and you’d still be bringing this amount of material in because it can’t be produced at U.S. facilities right now,” he said. He added that it possibly could change in the future but right now their forecasts for the Port are still very stable.

The Port has been much busier than ever before in recent years. Hirthe said that in the last four years they’ve had about 40 ships from Europe, North Africa, and the Mediterranean come to the Port. In the four years prior to that they’ve seen only about a dozen ships.

Things don’t slow down at the Port even when the seaway closes. Fleming said that while the Federal Mackinac and the Isolda are the first oceangoing ships calling on the Port in 2018, since the beginning of the year they’ve had more than 40 lake freighters and barges handling hundreds of thousands of tons of road salt, limestone and cement.

The Port has also been investing in their rail lines, said Hirthe. At least 15 of the seaway vessel docks at the Port have rail sidings and they’re putting as much cargo onto rail cars as they can, which eliminates the need to put trucks on highways. In fact, last year they took 200 to 250 trucks off the highway and they want to double if not triple that this year. This lowers overall transportation costs as well as reduces carbon footprints and makes roads less congested.

See the action for yourself in our photo gallery below. 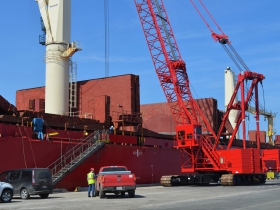 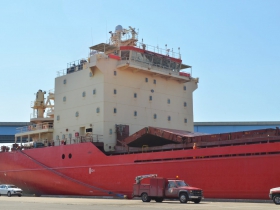 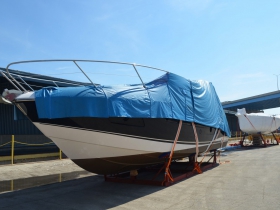 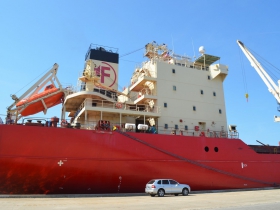 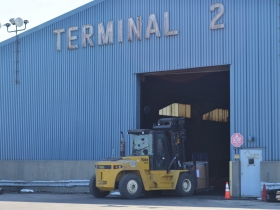 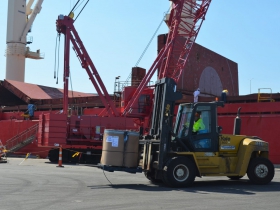