The Battle Over Great Lakes Water

Big users Nestlé and Waukesha to be joined by Foxconn. Who’s next? 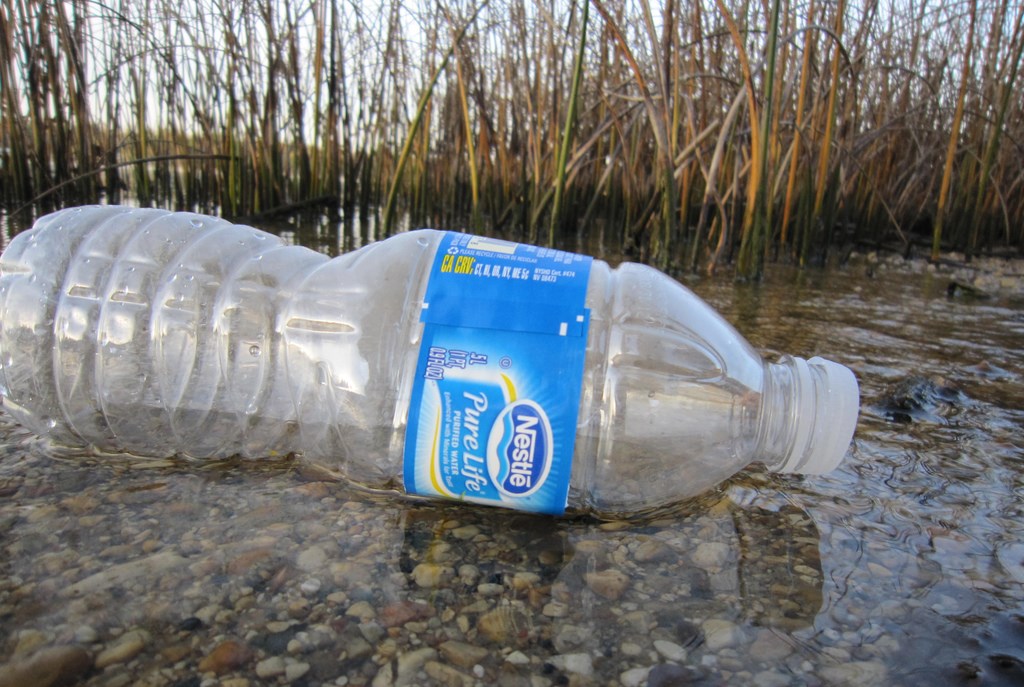 Wisconsin is regularly at the center of Great Lakes water politics, but it’s not the only place where controversies arise. Amid intense local and state-level battles over Waukesha’s plan to source Lake Michigan water, and Foxconn’s in-the-works application to use the same at a massive LCD screen factory in Mount Pleasant, these issues attract regional and international attention.

Tapping The Great Lakes, a documentary from Detroit Public TV and Great Lakes Now released in March 2018, offers a bit of perspective by juxtaposing Wisconsin’s water controversies with another in Michigan related to bottled-water operations.

Only days after the documentary debuted, the state of Michigan granted permission to Nestlé Waters North America, part of the Switzerland-based international food and beverage company, to pump even more water from a groundwater well it’s already using within the Great Lakes basin, over fierce public objection. As Nestlé sells this water for profit under the Ice Mountain brand name, residents in Flint continue to suffer the impacts of the city’s water crisis that state officials set off in 2014 with a series of blunders, some of which prompted criminal charges.

In the documentary, Great Lakes Now and Detroit Public TV journalist Mary Ellen Geist talks with officials and stakeholders in both Michigan and Wisconsin to offer an overview of the Great Lakes Compact — an agreement finalized in 2008 by eight U.S. states that guards access to the lakes’ water — and how the Nestlé and Waukesha withdrawals test its terms.

Nestlé isn’t drawing water directly from the lakes, but from groundwater instead. Water flows between surface water bodies and underground deposits, so pumping groundwater can impact the levels of lakes, rivers and streams. Nearly the entirety of Michigan is in the Great Lakes Basin, which means all water use in the state is to some extent or other hydrologically bound up with the lakes themselves. It’s quite unlike Wisconsin, which is divided between the Great Lakes Basin and the Mississippi River Basin.

Michigan-based environmental activists including Jim Olson and Peggy Case speak in Tapping The Great Lakes about how, in the 18 contentious years Nestlé has been pumping water in the state (something it had initially hoped to do in Wisconsin), surface waters near the company’s wells have changed.

“The streams are drying up,” Case said. “When you go to the headwaters, at least, so-called monitors there, they claim the water is running at some ridiculous amount, 200 gallons per minute, and what we find is a puddle with stagnant water in it.”

Nestlé’s sale of bottled water both in and out of the Great Lakes Basin would seem to run against the overall spirit of the Great Lakes Compact, which establishes that the lakes are a public trust and that when people withdraw their water, it’s largely supposed to be for residential customers with some level of industrial use.

Given this rule, if Nestlé or another business wants to sell water sourced within the Great Lakes Basin in small bottles, it’s largely an individual state’s decision whether or not to allow it. The Compact delegates a lot of enforcement power to individual states, including the sale of products containing water under that 5.7 gallon volume threshold.

When the city of Waukesha sought to tap Lake Michigan for its drinking water supply, though, it took the unanimous approval of the governors of all eight Great Lakes states, in their capacity as the Great Lakes Compact Council. That’s because the city isn’t in the Basin at all, but is within Waukesha County, which straddles its boundary. 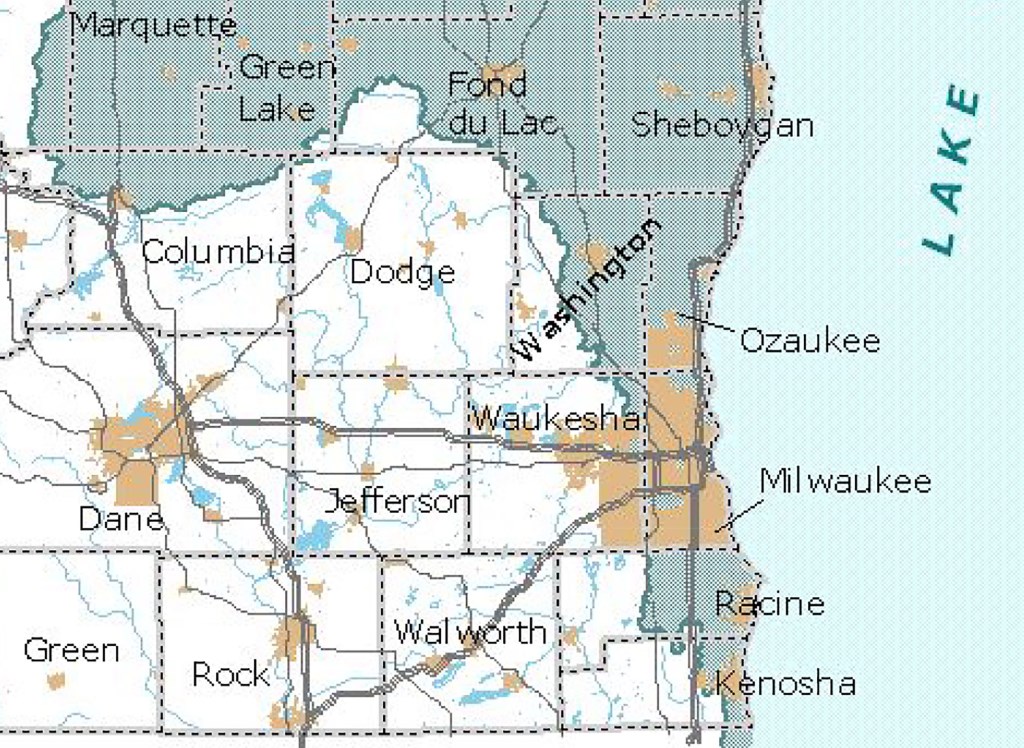 The city of Waukesha is not located within the Great Lakes Basin, but the county straddles its boundary. Map from the Wisconsin Department of Natural Resources.

Under the Compact, such a straddling-county community can request access to Great Lakes water from the Council, but has to make the case that it doesn’t have a reasonable alternative. Waukesha argued that the radium tainting its groundwater and the depletion of its groundwater supply (which in turn made the contamination worse) left it with no other option. In June 2016, eight state governors agreed.

Both Waukesha and Nestlé frame their water demands as infinitesimal. At an environmental journalism conference in January 2017, Waukesha Water Utility manager Dan Duchniak compared the approximately 8 million gallons per day the city plans to withdraw from Lake Michigan to taking a thimbleful of water from an Olympic-sized swimming pool. And in Tapping The Great Lakes, Nestlé natural resources manager Arlene Anderson Vincent said that “collectively, all the water bottlers account for .01 percent of all the water use in [Michigan].”

Withdrawal of Great Lakes water by people, as extensive as it is, does indeed account for a very tiny portion of the six quadrillion gallons contained in the lakes themselves. Any one user, even a major one like a city or large industrial operation, is only one small portion of that use.

Still, as photos of depleted streams in the documentary illustrate, withdrawals can have a quite visible impact on local watersheds within the Great Lakes Basin. While it would take a truly epic series of human blunders to exhaust a resource as vast as the Great Lakes — actions against which the Compact is meant to guard — there’s always a lingering worry about what would happen to that resource in the long run if more local governments and industries take advantage of the Compact’s loopholes and grey areas.

What happens with more Waukeshas, more Nestlés, more industrial users like Foxconn? One of the underlying assumptions of the Great Lakes Compact is that water taken from the basin will largely be discharged back into it, minus that which people manage to use up in various ways.

Vincent said in the documentary that “nobody pays for water in the state of Michigan,” noting that a household utility bill represents less any water use itself than the infrastructure and energy costs needed to operate a water utility. This statement is in part a response to criticism that Nestlé pays state and local governments very little for the ability to withdraw billions of gallons of water. Vincent also cites the capital investment Nestlé has made in its pumping and bottling operation in Michigan.

These arguments from Nestlé don’t address how water is broadly used, nor its costs. A single household paying its utility bill for drinking, cooking cleaning and bathing water is not a massive publicly traded company with access to various methods of capitalization, and presumably isn’t bottling that water to be shipped elsewhere and sold at a markup. Said household sends a lot, though not all, of the water it uses down the drain, where it leads to a wastewater treatment plant, and ultimately back into the watershed from which it came.

It also isn’t true that people don’t pay for water. Legally speaking, the water of the Great Lakes belongs to the eight Great Lakes states — Illinois, Indiana, Michigan, Minnesota, New York, Ohio, Pennsylvania and Wisconsin — and the Canadian provinces of Ontario and Quebec. But that water is regulated to maintain its quality, and enforcing those regulations requires billions in state and federal tax dollars. Additionally, thousands of industrial users around the country get water from public utilities, paying their bills and helping to maintain infrastructure everyone else in their communities depends on. Delivering water from a variety of sources to millions of faucets exacts a cost borne by consumers and taxpayers.

Waukesha’s water use distinctly differs from Nestlé. The city will largely use its Great Lakes access to provide drinking water, and officials admit, without pleasure, that they expect the utility’s customers to pay higher bills due to the infrastructure costs of getting the water to them.

Critics of Waukesha accuse the city not of profiteering, but of not keeping its story straight. Michigan U.S. Rep Debbie Dingell, D-Dearborn, said in Tapping The Great Lakes that Waukesha started out claiming that it needed Lake Michigan water because of radium contamination, not because of the depletion of those groundwater reserves. Duchniak countered that it’s both issues. Indeed, they are intertwined; as groundwater volume decreases, naturally occurring radium taints it at increasing concentrations. Meanwhile, opponents of the Waukesha diversion state in the documentary that there’s evidence that the area’s groundwater reserves have rebounded a bit since the turn of the century.

During the Great Lakes Compact approval process, Waukesha had to compromise on plans to expand the geographic area its water utility would serve.

“What became highly contentious was when they initially proposed this diversion, they requested to add additional communities to their water supply district, and it started to look like kind of an economic-growth type of project rather than just a water supply for people that needed it because their groundwater was contaminated,” Wayne State University Law School professor and Transnational Environmental Law Clinic director Nick Schroeck said in the documentary.

In 2010, Waukesha asked to use 10.9 million gallons per day — far more than it’s using in 2018 — then walked their request back to 8.2 million gallons per day and proposed using it in a smaller service area. That’s what the Compact Council eventually approved. Schroeck called it a “very good middle of the road decision,” while also pointing out its political implications.

“Waukesha was on the minds of the drafters of the Compact when they agreed to this document … you had to pass it in Wisconsin, so you needed some provision for a politically powerful community in the state to agree to allow this legislation to go forward,” Schroeck said, hinting at Waukesha County’s status as an influential Republican stronghold.

As different as the particulars are, both Nestlé and Waukesha point to bigger questions about the future of water resources in the Great Lakes. How should states apply and interpret a relatively new but legally binding agreement? Are the few interpretive decisions made under the Great Lakes Compact so far setting the right precedents? Do the Compact and state and federal laws make it too easy for businesses and certain communities to misuse a resource that belongs to the people of the Great Lakes Basin?

As Geist notes at the end of Tapping The Great Lakes, these two disputes may have only set the stage for many other, equally or more fraught conflicts: “It’s hard to imagine a future in which there will be no future requests for water diversion from those in need, whether they be from close neighbors or distant interests.”

Water Battles Straddle The Great Lakes Basin was originally published on WisContext which produced the article in a partnership between Wisconsin Public Radio, Wisconsin Public Television and Cooperative Extension.

9 thoughts on “The Battle Over Great Lakes Water”