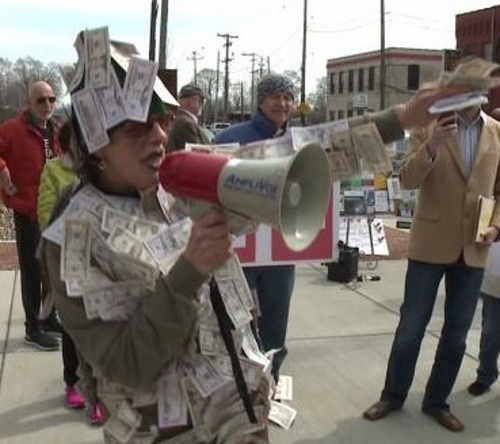 Money Man at a rally by the League of Progressive Seniors.

Trickery has become the staple of politics on the local, state and national level – deception the public needs to know about.

There is a slippery attempt to muddy the waters from a group funded by Milwaukee County Executive Chris Abele, who throws his wealth behind responsible and irresponsible causes, leaving the hapless public to figure out which is which.

It would be nice if as county exec he valued money nearly as much as he lavishes money on his own pet peeves, but since he doesn’t — let the taxpayer beware.

The Milwaukee Journal Sentinel estimates he is sinking close to a million dollars into his campaign to reshape the county board into a pliant partner via the April 3 election – backing candidates sometimes (but not always) friendly to his own camp mainly to demonstrate the power of his money.

Other reliable sources have itemized about half a million so far in his expenditures against the board, much of it to an out-of-state business that produces printed material and hires canvassers. It took awhile but the JS has caught up to the trickery.

The Abele group is named LeadershipMKE, which would disappear – and probably will shortly – without being propped up by his money. As an independent expenditure committee, it must report its spending, at its own pace.

The game has so angered a notable local group of citizens and activists that they held a noon rally March 28 under the banner The League of Progressive Seniors – and they have even produced a website to further their protest. Their stated aim is to protect Milwaukee democracy from Abele’s money. The group’s board boasts a roster of familiar activist, union and former county worker names, including SEIU’s Bruce Colburn, Anita Johnson, Karen Royster, Stephanie Sue Stein (retired director of the county’s Department on Aging), Jan Wilberg, retired AFSCME legislative leader Patty Yunk and lawyer Jackie Boynton.

Abele’s LeadershipMKE is trying to sidestep its own noose with deceptive come-ons and misstatements about county board votes. While it dispenses Abele’s money to attack county leaders, it lists responsible and irresponsible candidates indiscriminately on its own website, from school board races to village trustees to the county board.

Some were recruited by Abele, some were not.  Some are supportive of his efforts to take more control of county government away from the county board, others are not.

They are all mixed together in such as a way as to make the site’s recommendations unreliable. For instance I am a longtime acquaintance of Oak Creek mayoral candidate, Dan Bukiewicz, also president of the building trades council, and he is a good candidate. Yet he may be shocked as I am to find his campaign supported  – and I know Robert Hansen, running for Greenfield school board, was shocked. Supervisor Peggy West is a big supporter of Hansen who is a target of Abele’s money through the same group. You see how screwy the connections can get.

Abele’s group has put all these candidates in a bind about whether to support or disown his campaign literature that attacks their opponents but may not reflect their own viewpoints. It’s hard to reject help from any source in the heat of a campaign – and Abele is counting on that.

It’s pretty clear where Abele is putting most of his money, actually in the Oak Creek area giving a leg up to supervisor candidate James Davies over more progressive Steven Shea. Abele has dumped more than $115,000 into that race alone.  Other big expenditures are attacking sitting supervisors West and even conservative incumbent Steve Taylor (who dared vote against an Abele appointment).

Most interestingly he is supporting Casey Shorts against current board chair Theodore Lipscomb, Jr. though Shorts entered this race on his own, as I have discussed.

Now where I disagree with Abele is on an issue that Shorts has come to believe in – that the relationship between the county exec and the county board has toxic elements that stem from Lipscomb’s hostility.

Except that every board chair has been in disputes with Abele, a relationship I once explained as approaching Abele with an olive branch and getting it flung back as a stick in the eye.

I’ve interviewed many current and past supervisors who all had similar problems with Abele’s method of running the government. The shame is that they are sometimes supportive of his policies but it is his methods and inability to listen that raise hackles.

One of the misleading centerpieces of the LeadershipMKE website was a petition urging citizens to oppose the county board on paying to park in the parks – which ironically is the idea Abele wanted and the board helped stop.

The board had agreed to seek revenue from park operations, thinking that meant things like beer gardens, only to have Abele promote parking meters. The board then insisted the public should be heard and the public response was negative in the extreme.

But it wasn’t just the county board that screamed. So did every leader of every municipality in the county – in other words, the people closest to the citizenry, who all had a park in their backyard as it were. They had met with Abele a day before he announced he was withdrawing the idea.

But only sort of withdrawing. While a Madison bill that would give Abele more powers over the board, including imposing a wheel tax and parking meters at will, was shelved earlier this year, it still lies there dormant and can be revived at any time. It’s Abele’s bill, not the board’s, yet LeadershipMKE is trying to stir up anger at the county board for an Abele idea.

That’s what I mean by slippery.

Free lance writer Dominique Paul Noth for the past decade was editor of the Milwaukee Labor Press and website, milwaukeelabor.org. Until 1995 he was a senior editor and manager at Journal Communications.