Can Juveniles Get Life Without Parole?

By Gretchen Schuldt, Wisconsin Justice Initiative - Mar 13th, 2018 02:29 pm
Get a daily rundown of the top stories on Urban Milwaukee

Green Bay Correctional Institution. Photo from the Department of Corrections.

The State Supreme Court should decide whether Wisconsin’s case law on imposing life without parole sentences on juveniles complies with related decisions by the U.S. Supreme Court, a State Court of Appeals panel said.

The State Supreme Court also should rule on whether whether the two judges who pronounced life sentences on juveniles adequately considered the mitigating effect of the defendants’ youth, in compliance with U.S. Supreme Court standards.

The panel certified the cases to the Supreme Court for consideration.

Criminal justice experts are rethinking life sentences for juveniles more is learned about brain development. The U.S. Supreme Court said in 2012 that juveniles convicted of murder cannot be given a mandatory sentence of life imprisonment without parole.

The Court later ruled later that a no-parole sentence may be unconstitutional even if the judge considers the defendant’s age if the crime reflects “unfortunate but transient immaturity.” The Court also banned all life sentences for youth except “where the child is so irreparably corrupt that rehabilitation is impossible.”

Both cases in Wisconsin considered by the appeals panel are homicide cases. The first occurred in 1994, when Curtis Walker and an accomplice shot and killed a Milwaukee police officer. Walker was six weeks shy of his 18th birthday.

The judge sentenced Walker to life in prison with the possibility of parole in 75 years, or when Walker is 95.

Walker’s legal team is arguing that the de-facto life sentence is excessive and disproportionate and is inconsistent with the U.S. Supreme Court’s rulings.

The state, however, says that the U.S. Supreme Court’s decisions do not apply when the sentencing court, as it did in this case, has discretion to set a parole date. The state also is arguing that the issue of de facto life sentences are not included in that court’s decision.

In the second case, Omer Ninham, then 14, helped throw a 13-year-old boy off the fifth floor of a parking garage in 2000. He was sentenced to life without parole. 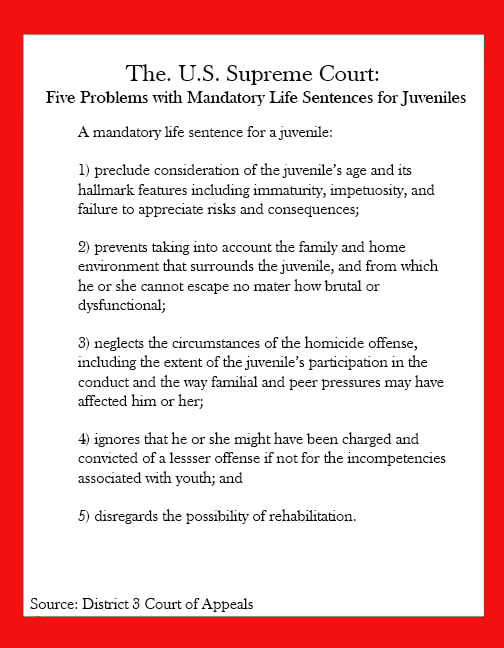 Ninham previously appealed, but the Wisconsin Supreme Court concluded that a life sentence without parole for a 14-year-old does not “categorically constitute cruel and unusual punishment,” and that Ninham’s sentence was not unduly harsh and excessive. The U.S. Supreme Court refused to review the case.

Ninham, like Walker, is arguing the sentencing judge did not adequately consider his youth at the time of the crime. The state is arguing that the U.S. Supreme Court decision was concerned with mandatory life sentences, not those imposed at the discretion the presiding judge. The appeals court said it reached a similar conclusion in a decision in another case.

The appeals panel also said it does not have the authority to disregard the earlier Wisconsin decisions upholding life-without-parole sentences for juveniles. That is true, the panel said, “regardless of advances in the science of brain development or other relevant research.”

Sentencing courts “would benefit greatly” from guidance on how much weight to give the factors identified in the US Supreme Court decisions and to what extent “the prospect for the juvenile’s rehabilitation takes precedence over other legitimate sentencing considerations, such as general deterrence,” the appeals panel said.