Evidence now shows he had cops digging for dirt on MaryNell Regan. Why? 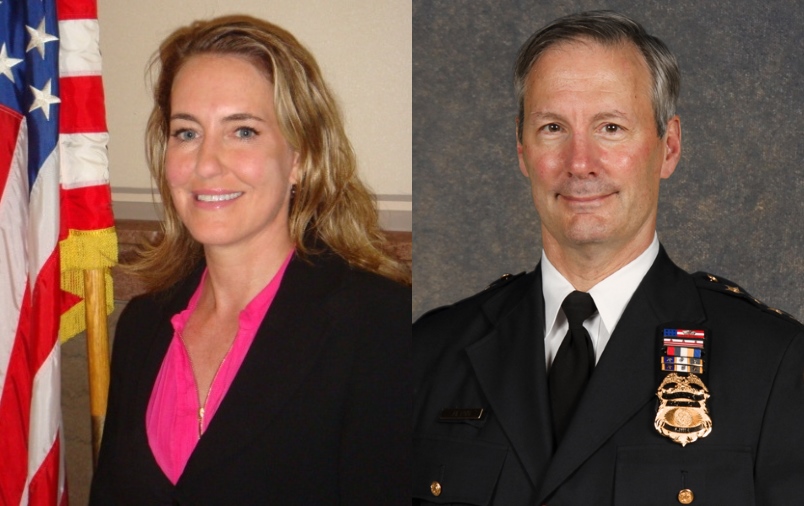 In the latter days of Edward Flynn’s tenure as Milwaukee Police Chief, he was not happy with the Fire and Police Commission. The commission, whose board members are appointed by the mayor, had tended to side with the chief on major issues, but in the last year of so, that had begun to change. Flynn, according to one police department insider, was convinced Mayor Tom Barrett had “lost control” of his appointees to the commission and felt the FPC was at times micro-managing him.

That might help explain a sleazy situation that seems like a stain on Flynn’s record here: the evidence suggests he launched or at least tolerated a police probe of a suspected affair between Fire and Police Commission Executive Director MaryNell Regan and Milwaukee Police Captain Johnny Sgrignuoli. As a new story by the Journal Sentinel reports, a memo by Police Sergeant Thomas Hines explains that he staked out the residence of Sgrignuoli and followed the car of Regan “only for the purpose of confirming that Captain Sgrignuoli was in a relationship with (Regan).”

But who ordered him to do this? There’s ample reason to believe it was Flynn.

The investigation initially had nothing to do with Regan, but was launched on January 30, 2017, because Sgrignuoli had violated department rules by pulling rank on the police sergeant handling the surveillance tapes at City Hall and demanding to look at them for personal reasons. When department higher-ups learned of this they initiated an investigation of Sgrignuoli, as I’ve reported.

But the investigation soon turned into a probe of Sgrignuoli’s relationship with Regan, as the Hines memo shows.

Hines notes that on March 17 he received information from the “Office of the Chief” that pushed the probe in the direction of Regan. The information came from retired Captain Mark Stanmeyer, who had been a key Flynn aide, his media relations person. Stanmeyer observed Sgrignuoli and Regan together at Total Wine in Brookfield.

So Hines rechecked the City Hall surveillance video Sgrignuoli had looked at, and sure enough, Regan could be seen entering and later exiting the City Hall garage. Next he went to Total Wine and observed the store’s surveillance video for the night Stanmeyer had been there, and sure enough, Sgrignuoli and Regan were together that night buying some items.

At this point there was abundant evidence Sgrignuoli had been tracking Regan on the City Hall surveillance tape and violated department rules to do so. That should have been the end of the case. Instead it turned into an investigation of a possible affair between two consenting adults who were each going through a separation from their spouse, and may have hit a troubled point in their lives, but were breaking no laws.

In April, based again on information from “the Office of the Chief,” police checked out an apartment in Wauwatosa leased by Sgrignuoli, obtaining a copy of the lease to see whether Regan was also listed on it. (She wasn’t.) Hines later began tracking the apartment, making “several unsuccessful attempts to locate” Regan there, but “never observed her personal vehicle outside the apartment.”

Hines later followed Regan after she left the City Hall garage one day “to see if she would drive to Captain Sgrignuoli’s residence.” Regan didn’t.

In May this creepy investigation continued, with Hines interviewing two different people, presumably people close to Sgrignuoli. One may have been his wife. Both interviews yielded no information.

Flynn told the press the only reason Regan came into the investigation is due to a concern Sgrignuoli might have been stalking the FPC director. Then why not simply call her and ask if this was a concern? But that apparently never happened. Moreover, the Hines memo never mentions any concern about stalking. Instead it makes clear this was an attempt to prove Regan was having an affair.

By May Regan was concerned she was being investigated. So she asked the mayor to intervene. “I called the chief, and he assured me that they were not investigating her personal life,” Barrett told WISN TV.

But instead of wrapping up the investigation, the department let Sgrignuoli and Regan dangle and worry about what was going on. Hines’ memo shows his work was done by May 15, yet the case would take three more months to complete. On June 30, Captain of Police James Shepard recommended a disciplinary action against Sgrignuoli for violating the department’s code of conduct. Yet this wasn’t done until August, when Sgrignuoli received a five-day suspension.

The case became public last month when documents of the investigation were leaked to veteran WISN reporter Colleen Henry. The timing of this, just before Flynn had retired, left some suspicious that he leaked the file.

Clearly the leaker didn’t include the Hines memo, because that would have told Henry the police were investigating an affair between two consulting adults. Instead, she did a story suggesting the head of the Fire and Police Commission tried to interfere with an investigation of a man who might have been her boyfriend. The story included an interview with Flynn saying Regan twice contacted him and warned him to stop the investigation. But Regan told WISN she told the chief to “stop investigating me.”

All of which was embarrassing to Regan, and quite misleading. It led me, too, to question whether Regan was attempting to call off an investigation of Sgrignuoli. It’s her word against Flynn, but given what we know now, I find Regan far more believable.

Also caught up by this misleading story was Common Council President Ashanti Hamilton, who told WISN he thought Regan might have violated “a clear bright line” if there was “even an appearance” of interfering with an investigation.

Hamilton later told me he thought the Common Council needed to investigate “why these questions were being asked of the chief… The appearance of all that activity (by Regan) should be cleared up.”

On the contrary, the only one who has some questions to answer is Ed Flynn.