“One House Over” is noble effort, but both play and production lack depth. 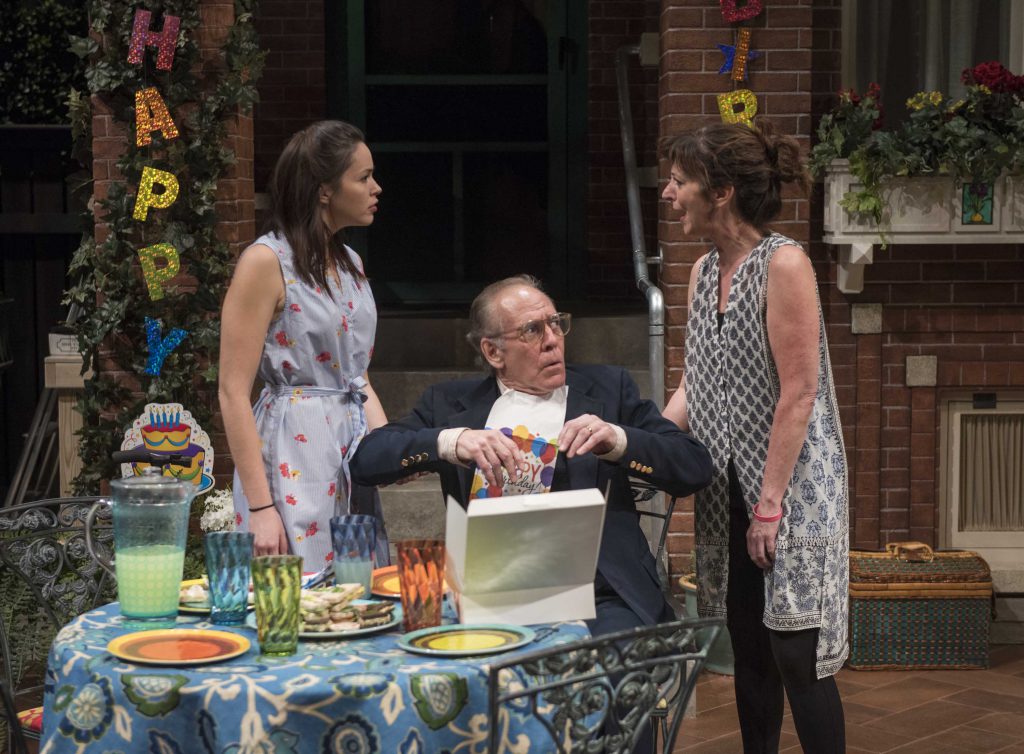 It may not be immediately apparent to Milwaukee Rep patrons that a world premiere represents months of intense workshops, technical preparation, dramaturgy and sweat – especially if the result (presented through March 25) is already committed to travel to Rochester’s Geva Theatre Center by April 3 with the same cast and set.

But one aspect of that hidden effort hits you smack in the face as you enter the Quadracci Powerhouse. It is scenic designer Kevin Depinet’s spectacular yet functional house and Chicago backyard complete with workable garden hose and basement windows, with neatly boxed plants and grass that really place you One House Over, as do Rachel Laritz’s attuned costuming that fits the characters even better than the actors do.

Not that the cast isn’t talented, but they are dealing with Catherine Trieschmann’s well-meaning comedic play still trying to find character commonality minute to minute. It seeks to put a crotchety Czech vulgarist (who vividly remembers his escape from the Nazis) and his sharp-tongued but lonely divorced daughter, Joanne, in proximity with their chosen home health care family, an attractive undocumented wife, Camila, and her chef-obsessed Dreamer husband (brought to the country when he was 2), Rafael.

Credit Trieschmann for always being interested in the bonds between opposites. Credit her and director Mark Clements for being attracted to the possibilities of this culture clash between an earlier generation of immigrants hiring the newer immigrant couple as helpers in 2010. That was an Obama year, when all expected a kinder future, an irony the playwright frequently reminds us about.

For two hours and 45 minutes we have what I call a two-drink play. It will be easier to swallow the looser the mood of the audience and the more they’re attuned to sitcom development, an “All in the Family” modernization. In that vein, patrons will take much of the proceedings with a friendly spirit in admiring the playwright’s gift for a social zinger.

But director Clements has not helped the actors bring more to the performances than they came in the door with, for they are experienced stage and TV imports who know how to hold a look or drop a laugh-line over the shoulder. To connect the people as genuine characters from moment to moment, that is a different problem and they seem on their own. There were many places when the interchanges could have been polished and even shortened so that the unlikelihood of the proceedings didn’t stick out at us. There were sections when the actors were still struggling with how to pace the obvious laugh lines with the internal justification.

The play does try to push the people gently closer to each other despite some lingering cultural suspicions – best embodied by a next door neighbor played with pompous intrusion by Jeanne Paulsen to reflect the neighborhood discomfort with this Mexican couple.

Some of the remarks being dropped are too overtly racist to fit the script’s reference to “reading between the lines.” Sometimes the lines seem like something delivered for the audience’s sake not the character’s, as when the old Czech, Milos, calls Camila a “wetback.” Far better is a comic exchange between Joanne and Rafael about why an Asian pot dealer is more trusted than a black one in Chicago.

The play attempts to wipe away that edgy language for an unearned level of affection: Milos, moved by faded lust at age 90, takes a liking to Camila, who in her turn is supposed to be moved toward him by longing for her own father.

Meanwhile, Milos’ real daughter Joanne, suffering from cancer, is moved by the cuisine and sympathy of Rafael, which in turn upsets Camila. This is an effort at reassembly of a quartet living in the same house. But the patrons are actually only waiting for the next punch line.

They will have to last through some of Trieschmann’s efforts at deeper dramatics — stretches of mutual confessionals and memory plays that are maudlin in the actors’ telegraphed delivery. While Clements moves the actors around the set well, the director’s main function of helping the cast develop whole people is not being served.

As Camila, Zoë Sophia Garcia brings a deliberately showy Latino spirit and common sense that fit the outlines if not all the behavior of the character. Justin Huen has similar sense of knowing how to throw away a line but even larger problems of believable continuity as Rafael.

Elaine Rivkin does the best as Joanne – at least in trying to motivate too abrupt changes in mood and certainly best at landing laughs and eliciting tears. But that’s skill. The finale, however, forces too many changes of tone on her.

Paulsen as the next door neighbor remains too much of a plot contrivance whose switch from nosy racist to friendly spirit offering crumb cakes defies belief.

The biggest problem is Milos the 90-year-old Czech father — or 90 only when the mood strikes him because actor Mark Jacoby is either too agile or too vaudeville-hall doddering. This is the cantankerous jesting oldster whose age gives us a freedom to laugh at his most obvious deceptions. But while Jacoby understands where the one-liners are, he is as baffled as we are of where the character is anchored.

One House Over Gallery 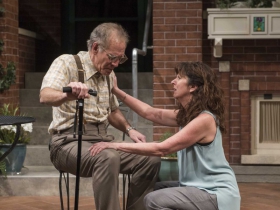 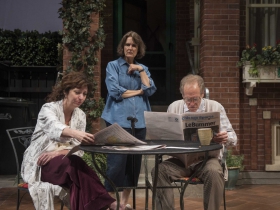 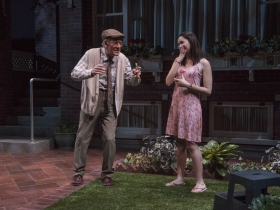 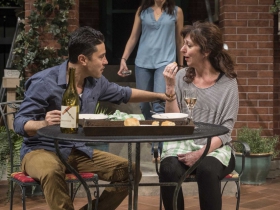 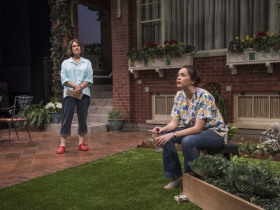 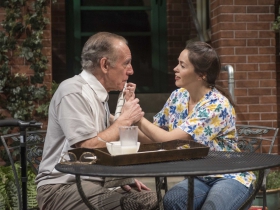