The Turtle Island Quartet has found a unique way to swing. They perform Friday. 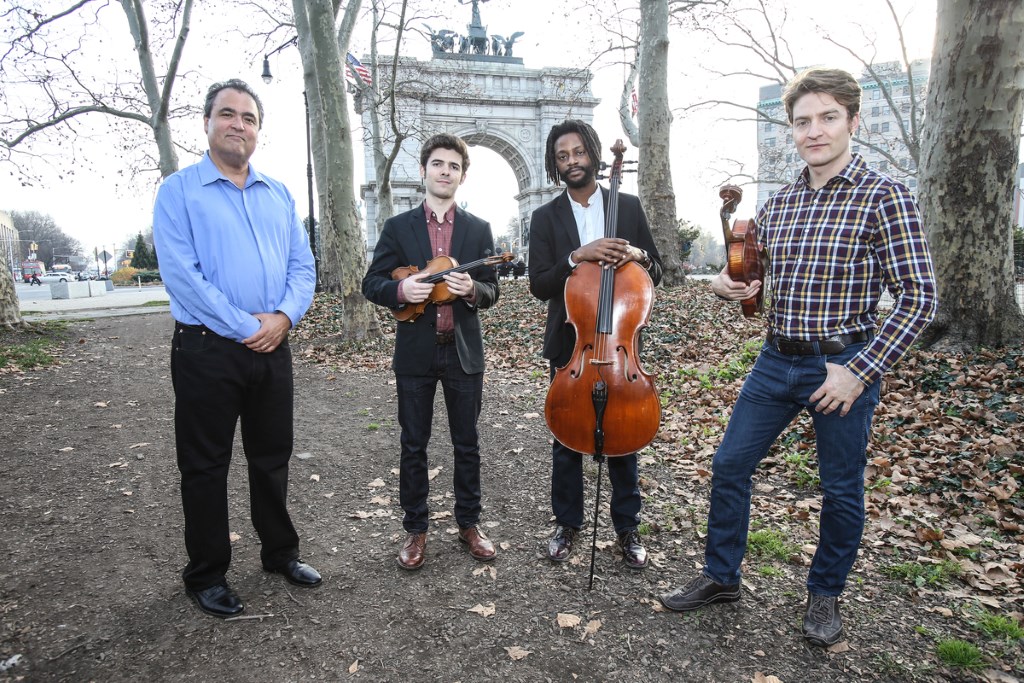 “We want to represent great American voices,” says David Balakrishnan about the Turtle Island Quartet. Balakrishnan is the founder of the group, which will be bringing an all-new program to the South Milwaukee Performing Arts Center on Friday, February 16. The title of the concert is  “Bird’s Eye View,” a play on words. Not only will the quartet be performing the music of Charlie “Bird” Parker, but they will be integrating an entire tradition of roots music, including bluegrass and jazz. The fusion of musical styles has made them famous, leading to two Grammy awards.

“We look at the period of Charlie Parker, Bud Powell, Miles Davis, Max Roach. We are giving it a ‘bird’s eye view’ from above, and also a ‘view’ of Charlie Parker. Then, we draw from the folk tradition and the string band format,” Balakrishnan says. The quartet’s name derives from a book of poetry by Gary Snyder that won the Pulitzer Prize in 1975. Dropping the “string quartet” moniker thereby calls to mind the Modern Jazz Quartet of the 1950s, the renowned combo that included Milt Jackson on vibes, John Lewis on piano, Percy Heath on bass, and Connie Kay on drums.

“The string quartet is an ultimate form, four voices,” says Balakrishnan. “We emphasize the four players as a string band.”

The American country string band sound is amplified by Hargreaves on violin, who joined Turtle Island two years ago and brings his extensive background in bluegrass and Texas swing to the group. “I learned fiddle at the same time as Suzuki,” he explains. He studied with Mark O’Connor, was a Grand Champion at the National Oldtime Fiddlers’ Contest, and won the 2009 Grand Masters Fiddle Championship in Nashville.

Hargreaves says that he enjoys the communal aspects of folk music, something that he also finds in Turtle Island. Beyond that, the musical styles are similar. “Bluegrass plays a big role in Turtle Island” he says. “You’ll be able to hear bluegrass in David’s compositions.”

Friday’s performance will include classic jazz by the greats and also Balakrishnan’s new commission, Aeroelasticity: Harmonies Of Impermanence. Like a jazz combo, the quartet will be working from charts and lead sheets, not performing from scored arrangements of jazz tunes. The group leaves room for spontaneity and improvisation.

“We play in the jazz aesthetic with acoustic instruments,” Balakrishnan explains. “The stereotype for violins is that they play in the European classical style. The saxophone is a loud instrument, and to play a violin like that, you’d have to use a powerful technique — a big vibrato, a big sound in the European style. This doesn’t work. It’s too stiff. Some people think that, to play jazz, you need an electric violin. This doesn’t work either.

They get the rhythm section from the violins. “Turtle Island revolutionized the chop,” says Hargreaves. The chop is a string technique, a pitched crunch of the bow at the frog end.

“It’s a way of creating a percussive sound with the instrument,” Hargreaves explains.

“Turtle Island creates a rhythm section without needing a bass or percussion,” says Balakrishnan. “The cellist adopts the role of the bass. Then, we draw from the folk tradition and using the chop and shuffle bow techniques, we get a drum style. What’s important is not just the solo on top, but the rhythm below. When we rehearse, once we solve the rhythm section puzzle, we are playing as a jazz group.”

“If you see us laughing,” Balakrishnan adds, “we’re improvising. If we’re not having fun, then there’s no point in playing.”