The Cosmic Landscapes of Matthew Lee

His time in Antarctica transformed Lee’s life and art. 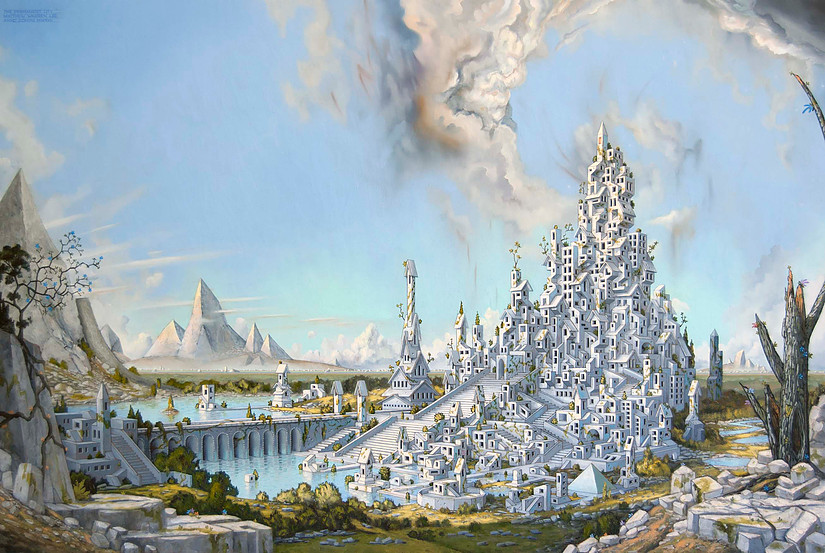 The Permanent City by Matthew Lee.

Matthew Lee is a phenomenal landscape painter, with the ability to absorb you into the world of his paintings. His work makes you want to spend time with it and ponder the message behind it. He grew up in Middleton, west of Madison, journeyed to Milwaukee when he was 18 years old, and never looked back. After receiving his bachelor’s degree in portrait painting from UW-Milwaukee, he went on a research adventure to Antarctica that would change his style and focus of painting, drawing from him the works that are currently wowing viewers of his Redline Milwaukee exhibition.

When he is not showing his work in galleries Lee teaches art classes at MIAD and makes annual trips, with Carthage college, to Montana to excavate 65-million-year-old dinosaur remains. In all of his works you can see his appreciation for our earth and the amount of time and energy he has put into mastering the visual representation of it on canvas. I had the pleasure of sitting with Matt for an enlightening discussion.

What is your favorite type of Art?

I like early American Modernism, a lot. Peter Bloom, Edward Hopper, and those people. I always joke that my work is like Ed Hopper’s Antarctica, like if he had decided to get out of New England, if he had been to the Arctic and been around telescopes and painted like that.

What was life like for you, as an artist, after your undergrad?

So I got out and I was painting portraits. I was working as a children’s film animator. And then in passing I had a buddy, we were having drinks and he had been to Antarctica, and I mentioned to him, “hey what’s that all about?” Like, you should get me in on that. Not really thinking anything of the conversation. I think two weeks later I got a phone call and then an interview (for a trip to Antarctica) which I bombed. They made me an alternate, which means that if someone gets hurt or get sick, that you get to go to Antarctica to work for them. I didn’t think much of it.

Then, my contract was up at my animation job and I was working as a barista, you know? Which I think is like a rite of passage for all artists, like, at some point you’ve gotta make coffee. And I was like, I wonder whatever happened to that (Antarctica project), because three months had passed. Well I’ll just give them a call and check in on my application, whatever, and they were like “Yeah we need you! We are leaving for Antarctica in two weeks.” So I got on a plane, flew to Denver for orientation, flew all the way around the world to New Zealand. Got on a military aircraft and flew to Antarctica. I spent six months on a research station, scrubbing toilets. Then I came back to the states, and left again, and then went to the geographic South Pole for 13 months, for an arctic winter. That was the formative experience of my life.

How did that impact you as an artist?

It changed my work entirely. I went to Antarctica a portrait painter and I came back a landscape painter, and really interested in making all these paintings of machines and architecture. Being in Antartica and seeing the awesome patience of geological time and learning all the stuff about the global environmental crisis. Which is like a global form of anxiety compounded with my own personal anxieties about being isolated and stuff like that. I sort of came back feeling like people weren’t that important anymore. So I didn’t want to sit around and make portraits about people’s psychology. I wanted to talk about these bigger global issues, and that’s when I turned to landscape.

Can you talk about how your work began to change?

Around 2012 when the really bad Colorado wild fires were happening out west, I was watching all these news stories and all these photographs, and America catching on fire. That’s when I started taking those Associated Press photographs and using those to paint the clouds that are in the paintings. So, that’s kind of where these ideas of conflict came from. You’ve got these towering monuments from human ingenuity, beautiful massive telescopes, and neutrino detectors, and particle colliders. But at the same time nature and its unfortunate realities are interjecting. So there is a conflicted space there. I think beauty is the pull. People see the paintings and they’re pretty colorful, and that kind of draws them in, and then the more you sit with them, the more you realize something is not right.

That’s like the core of my problem. We have the ability to make this amazing stuff. There is a machine in New Mexico that makes synthetic stars. I mean, it’s amazing, but we can’t seem to solve these other problems that we created. That’s really like a point of sadness and contention for me. I think that’s one of the reasons I paint, you know? I paint because it makes me feel powerful. I’m not in control of the economy. I can’t control who becomes president, you know? That’s daunting, you know? Depressing. But, when I’m in my studio I feel powerful, like I am in control.

Tell me about your transition from grad school to teaching.

So, I got out of grad school. It worked out pretty well. Just because…Antarctica means that I don’t have any debt. I made all that money there, and I was able to put myself through grad school with that. So it was really easy to live on adjunct pay, even though it was pretty low. I just rented a room from a friend of mine. I have a master’s in painting and drawing, which is my terminal degree, and that qualifies you to teach at the university level.

So I just started applying for adjunct jobs. I got my first one at Carthage, in Kenosha. So I used to commute down there, teach a couple of classes. From there I got a gig at Alverno college. I did that for a while, and eventually landed at MIAD. I was teaching at multiple universities for a while. I was teaching different stuff all over the place. Just because those universities are so different. Alverno is the most different. I mean, they have no grades. It’s a pretty fascinating institution. I really liked working over there. I was teaching mostly drawing classes and like 2-D concepts and stuff like that.

How’d you team up with Redline Gallery?

Redline! I did a residency with Port Art Partners. Which is up in Port Washington. It was awesome! I got it right out of grad school. I got a free studio. It was really great. I showed in their gallery. Another resident there was a resident at Redline. They were doing a benefit thing where you paint a 12X12 and then they auction them off to help fund the gallery. She asked me if I wanted to do it and I had a 12X12 already. So, I was like “yeah! here you go!”. They auctioned it off.

I didn’t hear from them, past that, for a while. For maybe a year. Then, all of sudden they called me up and they said “Hey, you’ve been on our radar for a long time,” because I gave them that painting. They said “we want to do a group show or solo show. What do you want to do?” and I said “I think I want to fill it, I want to do a solo show.” Because this is technically my first solo show. I mean you can say my thesis was a solo show, but I was a grad student. So, this was the first really big show that I’ve done. It’s the most paintings and drawings I’ve ever assembled in one place.

It was great! They were really helpful. I mean, they basically hung my entire show for me. Which was crazy! Yeah, they were super easy to work with.

Do you have plans for another upcoming up?

My next solo show is in 2021! They play that stuff way far out. That’s James Watrous Gallery in Madison. So, I need to be starting to churn out stuff for that. I mean you really do need that much time. I need several years to get it together…( a show of that magnitude). So, yeah! I have got several big projects in the works.

To Whom Do We Owe Utopia? Gallery 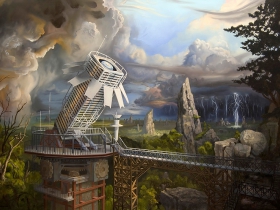 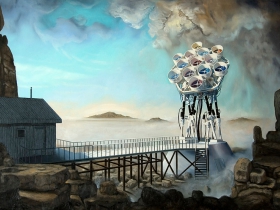 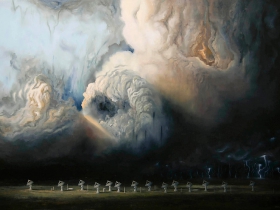 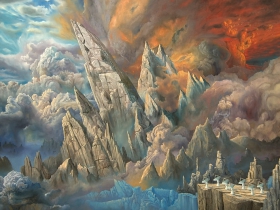 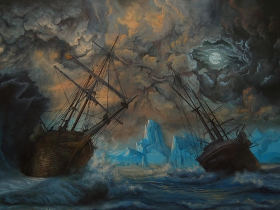 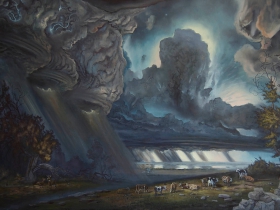 Matthew Lee’s show, “To Whom Do We Owe Utopia?” will be displayed through March 24 at RedLine Milwaukee, 1422 N. 4th St.

2 thoughts on “Art: The Cosmic Landscapes of Matthew Lee”