Skylight’s Sci-Fi Musical Is a Blast

‘Zombies From the Beyond’ sends up B movies of ‘50s and much more. 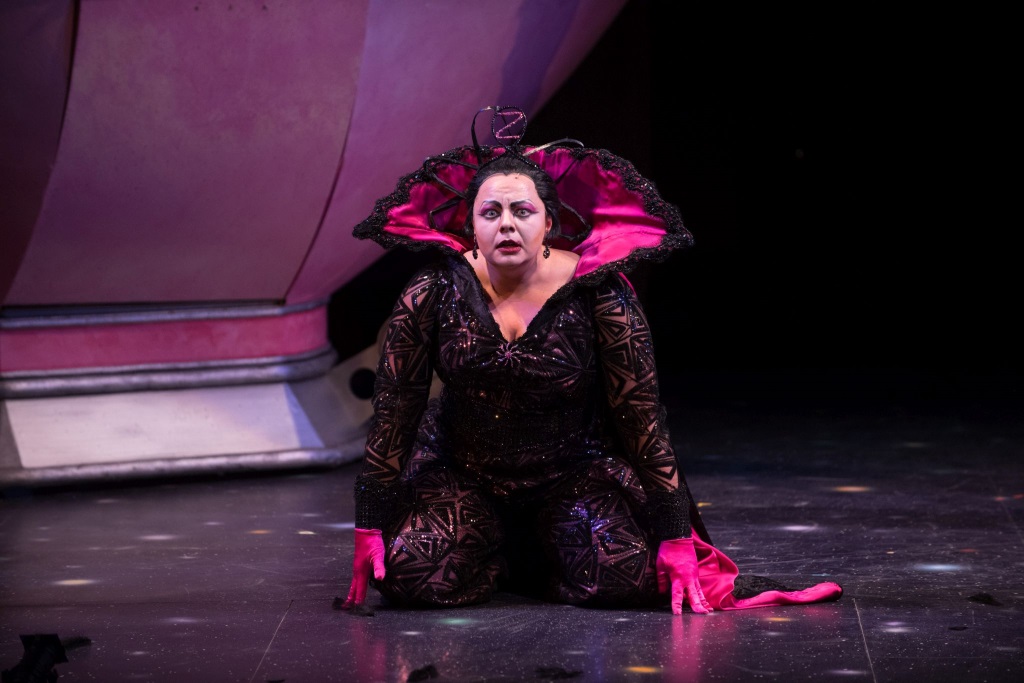 SaraLynn Evenson (Zombina) in rehearsal for Skylight Music Theatre’s Zombies from The Beyond running Feb. 2-18. Photo by Mark Frohna.

In a pre-show chat with author-composer James Valcq, the Skylight’s ever bubbly artistic director Ray Jivoff, a longtime acquaintance, dropped a generality about his Milwaukee audiences that I found quite apt – how they may love a production on the inside or quietly but not with the bursts of laughter and huzzahs that Jivoff and other performers live for.

It was a particularly timely comment as the Skylight revisits after 20 years Zombies From the Beyond through February 18 at the Cabot Theater.

Here is a show where patrons should openly groan at trite dialog delivered with a twist based on sci-fi B movies of the 1950s. Or chuckle aloud at the antics of that era’s stuffy militarized men and lovesick women. Or laugh openly at a ridiculous series of mocking dance steps or cheer a violently high note or an acrobatic tap-dance extended for absolutely no good reason. Or clap for a song that sounds like the climactic hit from “Bells Are Ringing” but isn’t anywhere close, just neatly derivative.

This may be what critics often call forgettable theater – hard to remember the details a day later – but it is an engaging evening of parody that deserves a spot on the theater shelf and takes months of exacting work to deliver well. Some will complain that it accomplishes little more than two plus hours of diversion — but when is that not a needed commodity these days?

So welcome the “Zombies”: a delightful cast of seven performers, hidden instruments and music machines and a set design and special effects by Aaron Dyszelski. It opens as if we were in a cheap movie-house watching a low budget movie and ends with the comic destruction of the Milwaukee skyline.

It is a sendup, but totally as musical comedy with tongue-in-cheek 1950s clichés, including the many musical streams of the era and of our cultural heritage. Many songs are precisely in the rhythm of operetta and Broadway show stoppers and even a top 40s mock hit breaking in on the radio and then sung with an invisible doo-wop chorus. Valcq makes sure you know it is an affectionate and sometimes sentimental tribute, in the vein of many musicals that spoof their own origins and still produce show-stoppers.

Valcq is something of an unknown Wisconsin treasure. A Skylight baby who runs a theater in Door County and has had two popular musicals in New York City, what he originates are toe-tapping pastiches in which everything goes, including eerie movie music and weird echoes of both Mozart and Bernard Herrmann (Hitchcock’s favorite composer).

Thus, when Zombina arrives on a flying saucer to conquer the Milwaukee Space Center, her weapon is her ungodly high soprano, sending SaraLynn Evenson into a series of arias that challenge and even surpass the range of serious opera. Evenson hits every note, flouncing humor as she goes, the amazingly high notes causing amusement at how easily she riffs through outrageous demands.

What can stop Zombina? Maybe some furious belting by the other women in the cast aided by the flying tap feet of delivery boy Joe Capstick.

This is singing and dancing divorced from believable behavior, but underneath it requires great skill at timing, which director Pam Kriger — who was also involved in the original New York production — has cast to perfection. Only when the males are made into zombies does her inventiveness falter – otherwise the movement choices are crisp and talented. 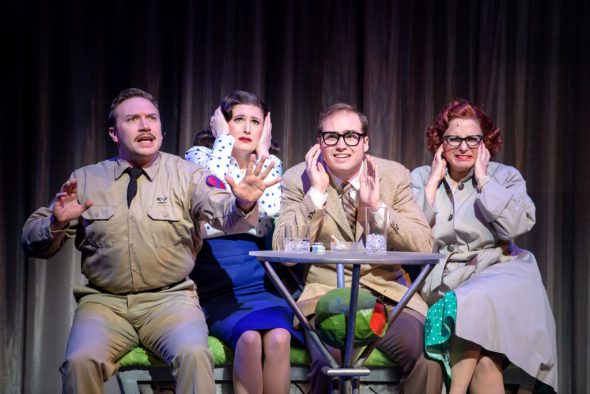 The physical standout is Skylight veteran Rick Pendzich, who is in all guises the go-to buffoon. But all are experts in this farce arena. Kathryn Hausman survives a few vocal crinkles and then unleashes a perfectly clear soprano with a deadpan ingénue delivery. Meghan Randolph as the love hungry secretary stops the show with a belting “Blast Off Baby” as she takes the male cast’s measurements for space suits. That sequence alone suggests the burlesque style needed and the fact that here is one cast member ready for the Broadway of the 1950s.

As an amorous nerd, Matt Frye survived an opening night sound mishap without missing a beat and sang and cavorted with great skill. Skilled veteran Norman Moses plays straight-man to the company and still gets his comic licks in.

The skill of the ensemble and the power of the production were not injured by an opening night claque of insiders, a row or two who knew the material and the cast. They wanted to tell the audience how to respond. But all the audience needed to know is what the nature of “Zombies” was telling them in every moment – shed your opera house sensibilities and give back as good as you’re getting.

Zombies From the Beyond Gallery 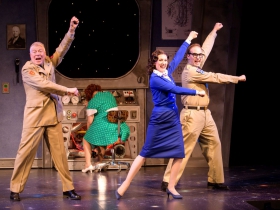 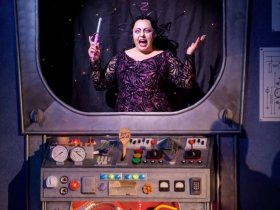 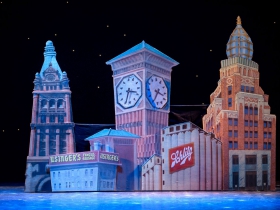 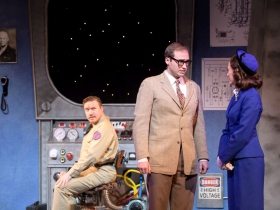 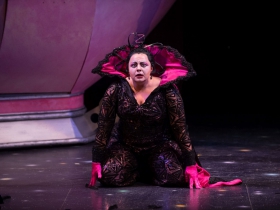 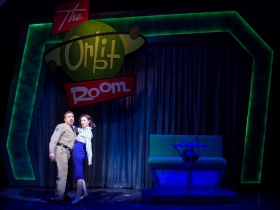