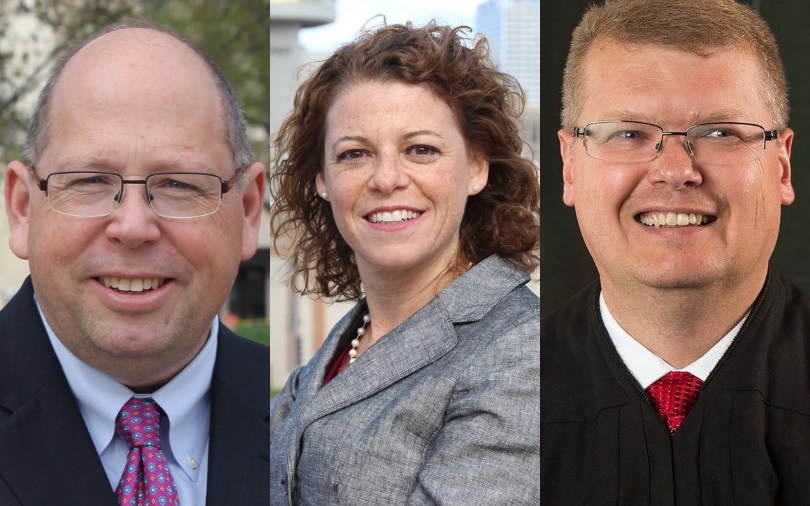 It’s the first state Supreme Court election without an incumbent since 2007, and the three-candidate race mirrors the growing divide in American politics.

Bernie Sanders still your political idol? Madison attorney Tim Burns has the same outrage, and on the same issues, as the Vermont Democrat during his presidential run last year.

Support Republican Gov. Scott Walker and Republicans who have run the Legislature for seven years? Sauk County Circuit Court Judge Michael Screnock has close ties to those Republicans. When he worked for a Madison law firm, Screnock asked courts to uphold both Walker’s Act 10 and the GOP’s redistricting map ruled unconstitutional by federal judges. Walker appointed Screnock a judge.

Want a Women’s March speaker who welcomes the #MeToo movement and who is angry that only 20 percent of Wisconsin judges are women? Milwaukee County Circuit Judge Rebecca Dallet checks all those boxes.

The candidates’ sharp differences in style, issues and gender deserve more than the expected poor turnout – maybe only 8 percent of voters – in the primary on February 20, 2018.

The average turnout in the last four Supreme Court primaries was 9.3 percent, according to state Elections Commission records.

The two February 20 winners will then face off in the April 3 general election for a 10-year term on the court. The seat is open because the court’s most controversial conservative, Justice Michael Gableman, did not seek a second term.

In the last three Supreme Court primaries (2011, ’13 and ’16), between 16.1 percent and 21.8 percent of the statewide vote came from Milwaukee County; the percentage cast by Dane County voters ranged from 10.6 percent to 15.6 percent.

In those same three primaries, the percentage of the statewide vote from Republican-rich Waukesha County ranged from 8 percent to 11.6 percent. Those are numbers Screnock supporters like.

There are also wild-card intangibles this election season that weren’t there in past Supreme Court primaries:

*Will Wisconsin Democrats, still reeling from President Donald Trump’s win of Wisconsin in November 2016, go to polls in the middle of winter for either Burns or Dallet? Sanders, remember, won Wisconsin’s spring presidential primary in 2016. Wisconsin was one of three states that gave Trump his Electoral College victory.

In a TV ad, the Dallet campaign openly appeals to anti-Trump voters. Trump has “attacked our civil rights and our values,” the ad says. Dallet then promises, “I’ll keep protecting our rights, and defending our values.”

*How little – or how much – should be made of the upset win by Democrat Patty Schachtner in a special election in the 10th State Senate district, which borders Minnesota. Was that really the first sign of a coming Democratic “wave”? Or is Senate Majority Leader Scott Fitzgerald right: the Republican candidate, Rep. Adam Jarchow, was from the “wrong” part of the district.

*Will Dallet get help from #MeTooers, who listen when she demands more female judges? An irony: If elected, Dallet would be the sixth woman on the seven-member Court.

*Who will the last-minute flurry of negative charges most help or hurt? Trying to help Screnock, the state Republican Party called Dallet a “liberal activist” last week and attacked her 2011 sentencing in an attempted child sexual assault case.

Burns and Dallet both attack Screnock for an incident decades ago in which he was cited for blocking access to a clinic that performed abortions.

Burns criticizes Dallet for supporting then-Justice Pat Roggensack, now the chief justice, when she was challenged by Ed Fallone, who “would have been the first Hispanic justice,” in 2013.

Returning fire, Dallet says Burns has no judicial experience, has practiced law “from a corporate boardroom – not a courtroom” and has “very little” experience with criminal cases.

Steven Walters is a senior producer for the nonprofit public affairs channel WisconsinEye. Contact him atstevenscotwalters@gmail.com