"In the current climate of America, I think there’s a significant need for safe and open space to explore, create, and perform comedy." 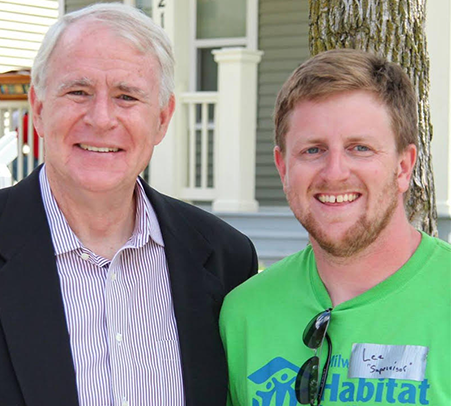 I have two awesome jobs. One as a Project Manager for Milwaukee Habitat for Humanity and the other as owner and Education Director for Mojo Dojo Comedy. Both jobs are incredibly fulfilling because they allow me to do the things I love: building community and entertaining audiences with comedy.

I moved from Portage, WI in 2004 for school at UW-Milwaukee and have been here ever since. I chose UWM because it was just right for me at the time. Not too close and not too far from my original home. Since I didn’t have many contacts here when I moved I was forced to make them on my own and overcome the fear of meeting new people to expand my network. That, turned out to be the best decision my 18 year old self could have made.

The opportunity to build community. Downtown you can see it manifest in the building that’s happening. At Habitat, I see it at the ground level, working with deserving families who might not otherwise have the opportunity to become homeowners. At Mojo Dojo, I work on building a safe, alternative space for people to try different forms of comedy like improv, stand-up, and sketch. Interest keeps growing for both; clearly people are interested in being part of a community.

A physical location for alternative comedy. In the current climate of America, I think there’s a significant need for safe and open space to explore, create, and perform comedy. More than just an open mic at a bar, I’d like to help build a harbor for people interested in the same thing. With Mojo Dojo Comedy, me and some of closest friends are getting closer and closer to that ideal.

What local restaurant is at the top of your list?

Right now Goodkind in Bay View is my favorite. They continually have tasty items on a rotating menu. Plus, the atmosphere and staff are always pleasant, even when they’re slammed. For me, they have also done a great job at becoming a true neighborhood restaurant since replacing the old De Marinis.