What the DNR had to say about the new Kohler golf course. 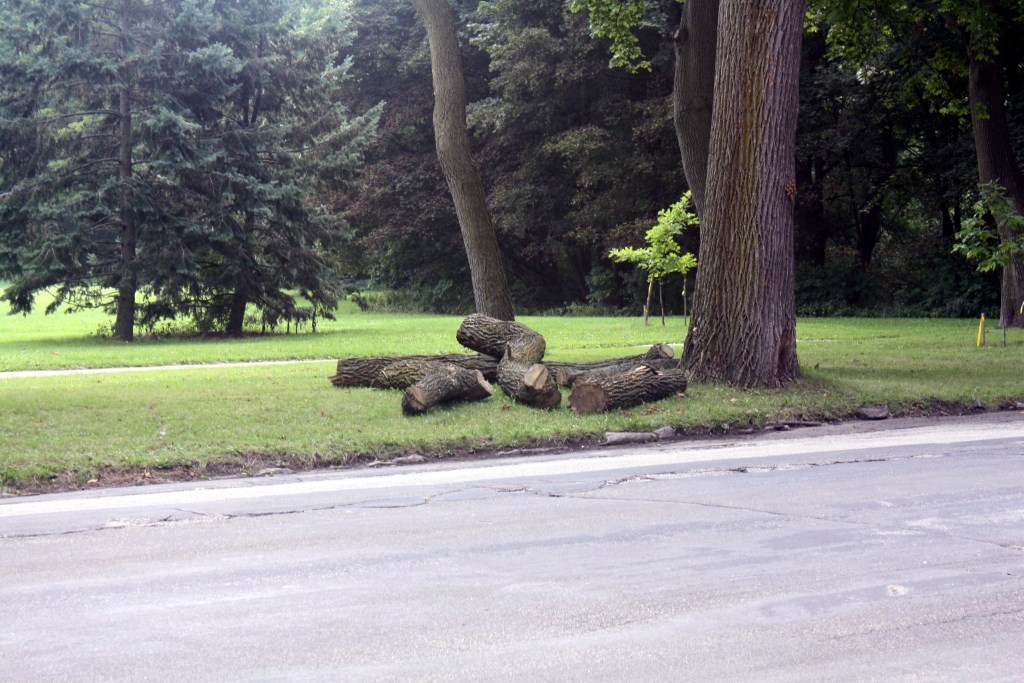 You may remember that some years ago, a Milwaukee homeowner on upscale Wahl Ave. across the street from the county’s Lake Park used a chainsaw on park land to get the less-obstructed view of Lake Michigan he wanted.

Scott Walker was a state legislator in the county at the time and Milwaukee County Executive by the time the case was settled, but I don’t remember him on the evening news speaking up for public land that had been damaged.

Anyway, the home owner eventually paid some restitution costs, and a fine, for cutting down a single tree after disagreements about deed restrictions and property rights and how many of eighteen trees found on the ground in the area could be tied by witnesses to the home owner’s actions.

Now this episode didn’t rank up there with other high-profile acts of controversial chainsawing, including one by the actor “Mr. T” in Lake Forest, IL, and in a Washington, DC suburb for Daniel Snyder, the billionaire owner of the local NFL Football franchise.

But you get the point.

People care about trees – – even just one.

And in today’s fast-paced and stressed world they may care even more because there’s published evidence that walking in nature among trees, aside from the pleasant timeout, is measurably good for your physical and mental health, as The New York Times headline put it: “How walking in Nature Changes the Brain.”

In other words, trees aren’t just connected to the soil and wetlands to get us the water we need for life, and which are a bulwark against a warming climate and violent weather. They and we are interconnected – – and even our brains are involved – –  so be smart and honor it.

Which brings me to the approval last week by the Wisconsin Department of Natural Resources of the first permit needed by a major Walker donor/Kohler interests to essentially flatten much of its privately-owned, heavily-wooded, dune-and-wetland-and-wildlife habitat-rich, 247-acre nature preserve in order to construct an 18-hole golf course, driving range, club house, restaurant, 260-vehicle parking lot, maintenance building and other amenities on a bluff south of Sheboygan a stone’s throw from the Lake Michigan shoreline – – and adjacent to, and even five acres into the popular Kohler Andrae State Park right next door.

So after a walk today for my health and peace of mind through the afore-mentioned Lake Park, I took the time with trees in mind to read the DNR’s lengthy Environmental Impact Statement which is launching the Kohler golf course permitting procedure.

And because there appear to be thousands and thousands of trees about to face the chainsaw, and the bulldozer, let’s consider the sad, DNR-detailed facts of this decision:

*  Page 36: Much of the 247-acre Kohler parcel currently includes forested habitat. The golf course design would remove approximately 100 to 120 acres of forested land cover. Forested land and specimen trees will remain as part of the design located predominantly between golf course features. Opening up blocks of forested land will result in greater potential for windthrow and wind damage to the remaining trees.

The edge would likely provide some habitat for species that inhabit transitions between forest and openings. Habitat value would likely be diminished.

Tree clearing would occur on the Property for each hole, the access road, the clubhouse/parking lot complex, the practice range, the maintenance facility, the restrooms, and the irrigation pond. Tree clearing may also occur in forested areas between tee and fairways to provide lines of sight. Interior forest bird nesting habitat is likely present within and adjacent to the Project boundary and would essentially be eliminated. Wildlife species inhabiting these areas would be permanently impacted by the loss of habitat.

However, impact to these species is not expected to create a significant effect on regional populations.

*  Page 63: Kohler has stated that the lakeshore and associated dune habitats are essential to the natural and minimalistic golf course design.

Some trees bordering the beach would be removed, allowing longer sight lines between the Project and Lake Michigan. Trees present in dune habitat that is utilized by a rare species may not be able to be removed unless additional authorizations are obtained (i.e., an incidental take permit). Additionally, the number and area of trees removed would have to be reviewed to determine the potential impacts on the beach/dune community.

*  Pages 69-70, Summary of Adverse Impacts That Cannot Be Avoided:

The site’s nearly 100% forested canopy would be reduced by nearly half. Habitat value will diminish along forest edges near turf grass and human use areas.

Approximately 3.7 acres of wetland would be lost due to filling including impacts to approximately 1.36 acres of Great Lakes ridge and swale wetlands, a wetland type that is considered “imperiled” in Wisconsin. Additional wetland impacts resulting from alterations to wetland hydrology and the influence of increased nutrients could change the wetland type and allow encroachment of invasive species.

Reduction of the forest to 50 percent cover would result in a substantial reduction of available migratory bird stopover habitat on the Kohler Property. Interior forest bird nesting habitat is likely present within and adjacent to the Project boundary and would essentially be eliminated…

Short term adverse impacts that cannot be avoided include approximately two years of construction traffic, noise, and dust. Hikers on the Black River Trail near the Black River would be the Kohler-Andrae patrons most likely to notice construction noise and changed aesthetics…

It is unknown to what extent storm water infiltration and nutrient and pesticide applications to fairways, tees and greens (for either establishment or maintenance) would impact groundwater quality in this permeable soil and shallow water table environment.

I encourage people to read the entire document. It includes projections of benefits, including increased taxes paid, jobs created during construction and everyday operations, destination benefits to the area’s economy, and more.

And I acknowledge that because the nature preserve is private property, the owner has tree-cutting rights, though they can bump against the public interest and agency scrutiny when the trees are on protected wetlands, or hold endangered species, for example.

But after looking at the pros and cons, and knowing that the project is in an area with many golfing opportunities – – it would be the fifth such major Kohler development relatively close by – –  and then finally reading this tidbit on page 58 of the DNR report:

I decided it was time to take another walk in Lake Park.

James Rowen, a former journalist and mayoral staffer in Milwaukee and Madison, writes a regular blog, The Political Environment