Past economic data suggests it won’t. And voters think it will fail.

In recent years, orthodox Republican thinking about economics both in Wisconsin and nationally has been dominated by supply-side economics. This theory holds that the road to prosperity runs through reducing taxes, particularly on businesses and wealthy people. It is no surprise, therefore that there is a heavy partisan divide to responses to the recently-passed Tax Cut and Jobs Act. Here is what a recent Quinnipiac University poll found: 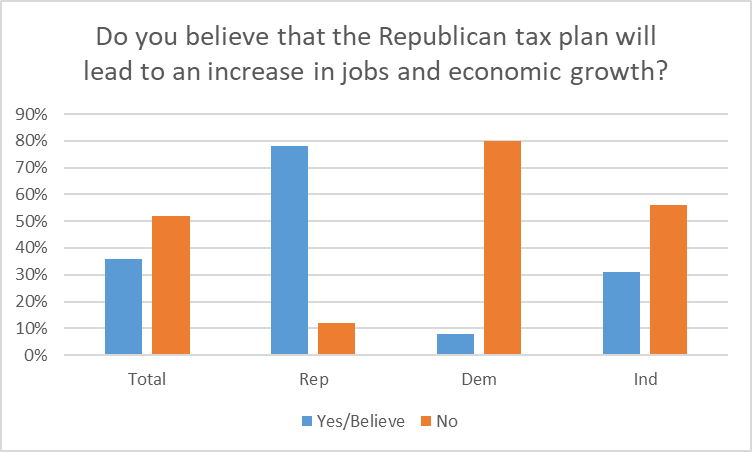 Do you believe that the Republican tax plan will lead to an increase in jobs and economic growth?

Despite candidate Donald Trump’s complaints about a tax system favoring the wealthy, as president he got behind legislation to further skew rates. This same approach — pushing tax cuts to boost the economy — underlies the ALEC ratings of state tax and other laws that have been the subject of several Data Wonk articles. Critics point to several counter-examples. For example, the George W. Bush tax cuts did not kick off the promised period of prosperity. And despite dire warnings, tax increases under Bill Clinton were followed by a period of economic growth and government surpluses.

Wisconsin offers its own counter-example to disprove ALEC. The chart below shows Wisconsin’s private sector employment starting two years before the inauguration of Gov. Scott Walker. Following the inauguration, a gap between US jobs developed and has been growing ever since, even as Walker’s policies have been all about cutting taxes. 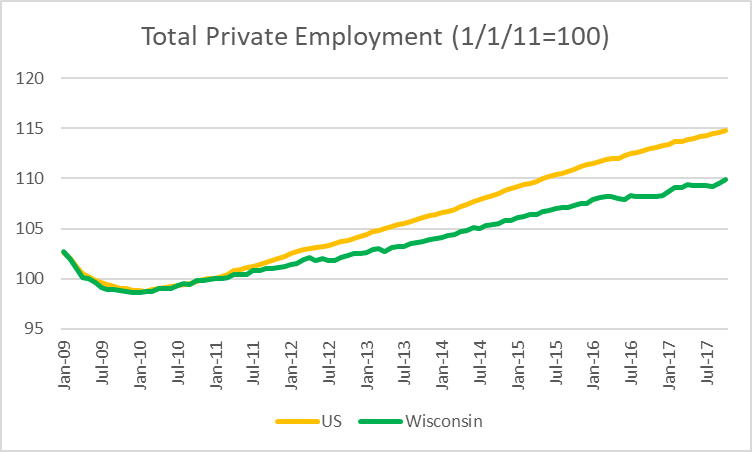 Whether or not one agrees that Trump is a “really smart … very stable genius,” during his campaign he showed a canny ability to identify political opportunity. By identifying the economic distress in Wisconsin, Michigan, and Pennsylvania, he managed to flip those states and thus win the presidency. While promising to bring relief by building a wall along the border with Mexico and renegotiate trade agreements, he also promised to crack down on the tax loopholes that benefited rich people and replace Obamacare with something much better. 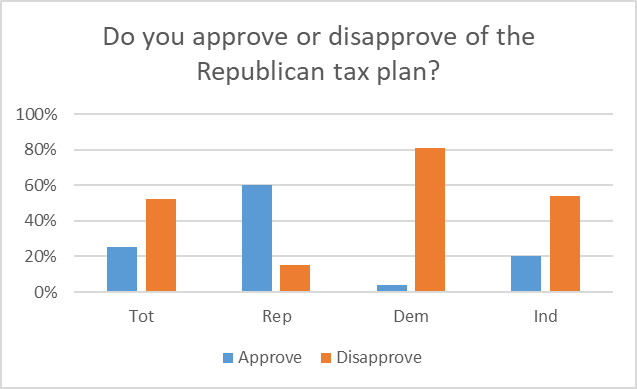 Do you approve or disapprove of the Republican tax plan?

Several conservative commentators, including the Journal Sentinel’s Christian Schneider and the New York Times’ Bret Stephens, argue that the act’s poor showing results from a misunderstanding. Around 35 percent of the voters believed the plan would raise their taxes, as shown below, also from the Quinnipiac poll. 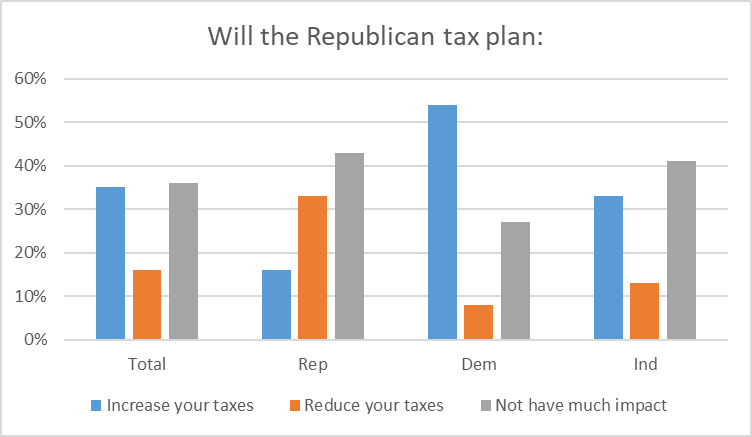 Will the Republican tax plan:

The Tax Policy Center estimates that “compared to current law, 5 percent of taxpayers would pay more tax in 2018, 9 percent in 2025, and 53 percent in 2027.” Thus, a strong majority will see either a reduction in taxes or no effect, at least in the short run. The assumption is that once people see reduced taxes, the act will become much more popular.

Yet, on other questions, the voters’ answers were much more accurate. Here are their responses when asked who the expected to benefit the most from the plan: 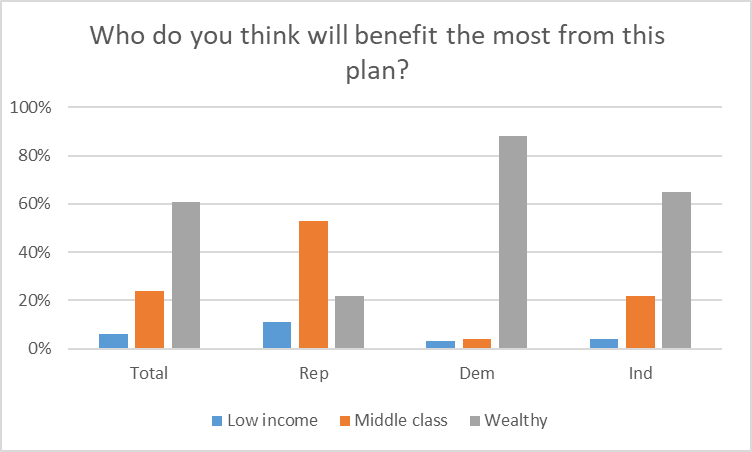 Who do you think will benefit the most from this plan?

A majority of voters overall—except Republicans–accurately said that wealthy people would benefit most. Shown below are the Tax Policy Center’s estimates of the percentage increase in after-tax income for various income groups. As income goes up so does the percentage change. Thus, the tax cut is distributed in a regressive fashion. 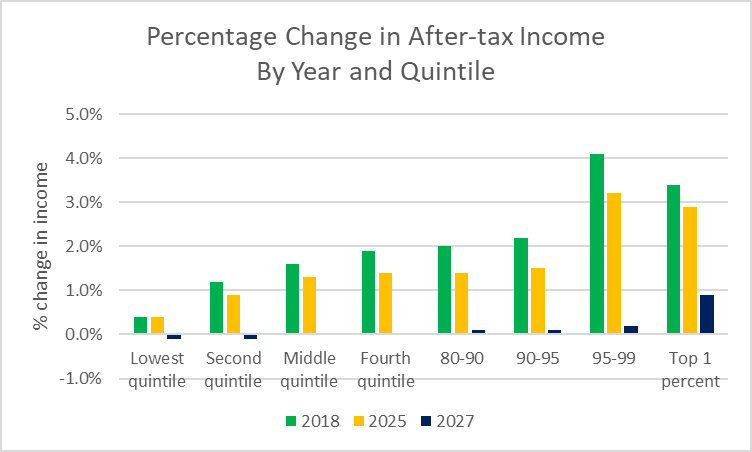 Percentage Change in After-tax Income By Year and Quintile

The disparity is even greater if the dollar value of the tax cut, rather than the percentage amount, is considered. The following graph shows the distribution of the cut by income level. Whereas the lowest paid quintile gets a $60 reduction and those in the middle get $930, the top 1 percent get $51,000. 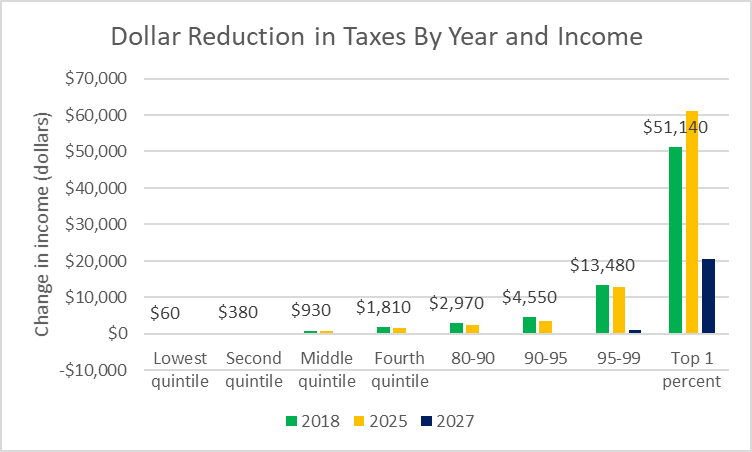 Dollar Reduction in Taxes By Year and Income

Further making the tax act unpopular is its use of deficit spending to fund its tax cuts. When the Economist/YouGov poll asked voters if they favored cutting tax rates for everyone, a majority said they did. However, a majority favored tax cuts only if they were not funded by deficits. 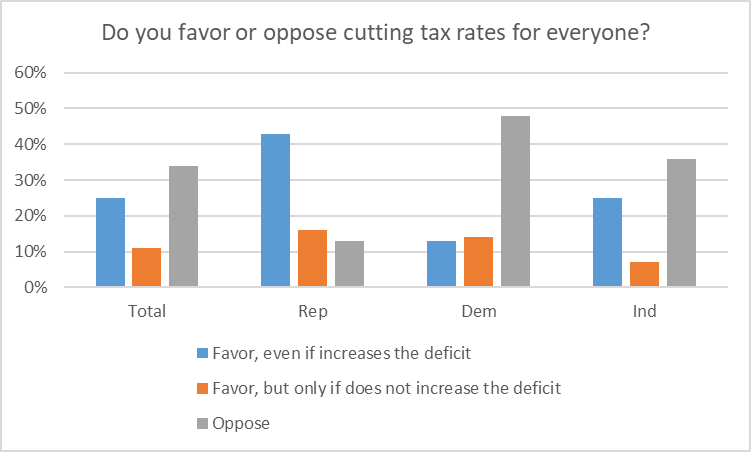 Do you favor or oppose cutting tax rates for everyone?

During the fight against the 2008 recession, Republicans in Congress positioned themselves as anti-deficit hawks. Yet it appears that deficits to fund tax cuts are fine. As the next chart shows, US debt grew substantially during the recession but recently leveled off. However, because of aging baby boomers, the Congressional Budget Office projects it to resume growing as shown by the red line. The tax cuts will further increase this growth, as shown by the yellow line based on the Tax Policy Center’s projections. 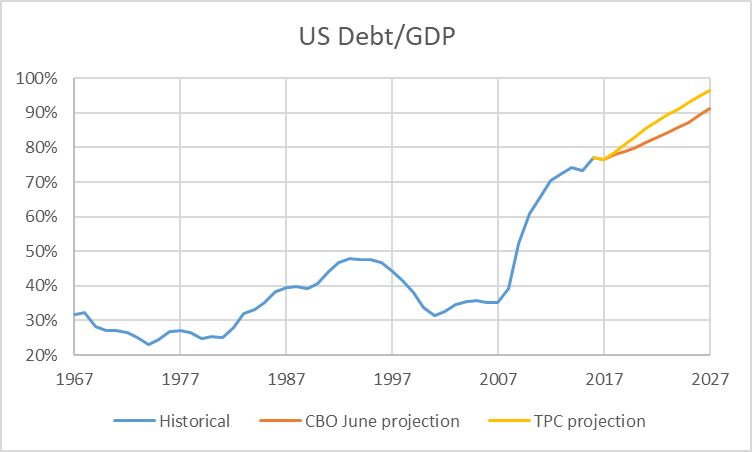 Yet recent comments from the two Republican candidates for US Senator suggest that they may soon resume their fixation on deficits. In comments to the Journal Sentinel, a spokeswoman for state Sen. Leah Vukmir said the nation needs to tackle its deficits and debt by addressing “the root of the problem, our spending.” She went on to say, “Leah agrees with Speaker Ryan, America’s debt is a threat to future generations and we must reform these programs.”

Businessman Kevin Nicholson‘s campaign commented that “too many typical career … politicians make empty promises to beneficiaries that the federal government can’t keep, and it’s not sustainable to generations of Americans who’ve not yet been born.”

Lately, Paul Ryan has also argued that the growing federal deficit is a reason to pass spending restraints on entitlements such as Medicaid, Medicare and welfare programs. It appears that deficits related to entitlements are a concern, but not those related to tax cuts focused on wealthy people.

There is a growing consensus that between them Trump and the Republican Congress have managed to put the next election in play. This seems to be reflected in the number of people running for the Democratic nomination for governor of Wisconsin and reports that Democrats nationally are signing up to contest historically Republican Congressional districts.

How far this has gone is suggested by a recent article by John Torinus published in Urban Milwaukee. In it, he suggests that the right kind of Democrat running the right kind of campaign could win the 58th Assembly District in Washington County. If any district should be a safe for Republicans, it is the 58th. In 2016, Clinton got 30 percent of the vote, down from Obama’s 32 percent in 2012. No Democrat ran for that seat in 2016, 2014, or 2012.

Democrats should recognize that the pain that Trump took advantage of is genuine. The Republican plan that was supposed to address this is heavily endorsed by their funders. However, there is little evidence that it works. In the next two Data Wonk articles, I plan to explore some of the reasons that have been advanced to explain why so many Americans are suffering and some possible policies that could help.