“I am not fabricating, falsifying,” he says, decrying current approaches to crime. 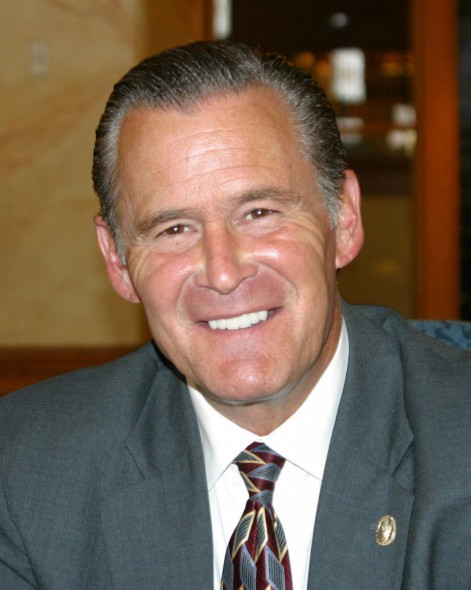 In a press conference at City Hall billed as the State of Public Safety in Milwaukee, Ald. Robert Donovan, chair of the public safety committee, repeatedly took aim today at Mayor Tom Barrett and outgoing Police Chief Ed Flynn, all while describing a city that is being terrorized by “villains.”

Donovan began by saying that he thinks he needs to persuade the media and others in City Hall to believe his picture of crime in Milwaukee.

“I am not fabricating, falsifying or exaggerating the public safety crisis confronting this city,” he declared.

Donovan offered a populist jab at the new Bucks arena, saying residents living in many neighborhoods experience a different rate of crime than in, “the playground for millionaires being built a couple of blocks from here.”

Donovan blasted what he called the Milwaukee Police Department’s no-pursuit policy, which was recently changed, and laid the levels of robberies and carjackings in recent years at the feet of the policy. He also connected the opioid epidemic to the policy mentioning that, “These poisons were being trafficked out of drug cars because dealers knew they would not be pursued under the departments ill advised no-pursuit policy.”

Donovan also claimed the opioid epidemic and its related crime, “only recently become a priority for Milwaukee Chief of Police.”

When Flynn announced his retirement Monday he said he was reassured he wouldn’t be retiring in the midst of a crime wave, and touted numbers showing a drop in homicides and other crimes in 2017 relative to recent years.

Donovan seemed to take issue with the chief’s estimation, saying Milwaukeeans “resent being told they are statistically better off than they’ve been in years,” when by Donovan’s own estimation, “Their quality of life and even their physical safety has declined in recent years.”

Homicides are down citywide in 2017, relative to the previous two years, but Donovan asked, “When did triple digit murders, in a city our size, become the new normal?”

At a recent Public Works Committee meeting, Donovan stormed out following a discussion of American Sewer, a city contractor that had employees openly carrying firearms and a cooler bearing white supremacist stickers, during which he criticized his fellow council members for terminating two of the firm’s contracts.

Donovan brought the American Sewer incident up again, saying some in the city can’t “comprehend the outrage” his fellow council members are showing over the behavior of American Sewer employees, “carrying guns for their protection. In a city where one of our own employees was murdered by a carjacker in broad daylight.”

Donovan was referring to Greg “Ziggy” Zyszkiewicz, a Department of Neighborhood Services employee killed last March while on the job. He said the city is performing a review of employee safety. And he called the review “a worthy process,” but also, “a review unprecedented.”

Donovan also derided the reduction of police officers in the latest city budget. But, in a new tack he’s taken lately, he added that the problem is not with the mayor but a “broken system” the state uses the fund local government, saying this “has compelled the mayor and my colleagues on the Common Council to year after year reduce the sworn strength of the Milwaukee police department.”

The latest budget also saw cuts to the Milwaukee Fire Department. And Donovan questioned whether the city could afford to do so. “Are we really as safe a we have imagined?” he asked.

During the budget process Barrett tried to secure a city sales tax,  which would have required approval from the state. Donovan took a shot at this as well, calling it, “tardy” and “inadequately drawn.”

Rules Himself Out As Police Chief

Donovan, in recent years, has been a vocal critic of Milwaukee’s Police Chief, and today said, “I am frankly pleased to say that Chief Flynn has chosen to resign…For all the good he may have done, he needs to go.”

“Chief Flynn’s first couple years were fabulous,” he added, but “over the years that has deteriorated.”

He went on to jokingly rule himself out as a candidate for new police chief, saying he supported the Fire and Police Commission’s goal of hiring someone “with roots in this community” and from within the Milwaukee Police Department. He took another jab at Flynn, who has a national reputation as an innovative police chief, saying his successor should be one who advances solutions that are “based not on esoteric notions credible only in a powerpoint.”

Donovan proffered three ideas to address the public safety crisis he sees in the city.

First, he proposed the legislature review and stiffen penalties for violent offenders, and include mandatory sentences for repeat offenders.

Second, he said he would ask the governor for a special commission to look at the juvenile justice system. He called the issues at the Lincoln Hills facility “abhorrent,” but also said the system should reflect “the modern reality of Juvenile crime.” And that the “fear and disorder” caused by juveniles can’t be waved away.

And third, he said he would ask the mayor to create a special commission comprised of a wide variety of stakeholders, to look at long-term municipal financing and make recommendations.