State would grow by $600 million per year. Without it many farms would fail.

By Tamarine Cornelius, Wisconsin Budget Project - Dec 21st, 2017 12:41 pm
Get a daily rundown of the top stories on Urban Milwaukee 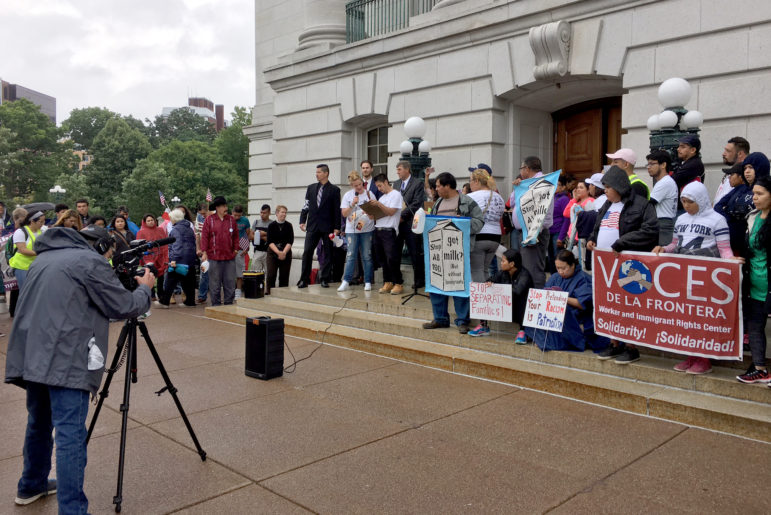 Immigrant dairy workers and their supporters gather at the state Capitol in Madison, Wis. on June 28, 2017. Photo by Alexandra Hall of WPR/Wisconsin Center for Investigative Journalism.

Wisconsin’s dairies and other businesses could gain access to additional, needed workers if Congress passes the Dream Act and allows immigrant youth to stay in the country and improve their job skills.

Wisconsin’s farms, particularly dairy farms, depend heavily on immigrant labor to function. Offering young immigrants a secure future would allow those workers to advance their education and develop the skills that employers – such as dairy farms – are looking for. Half of all workers on dairy farms are immigrants, according to a report by the National Milk Producers Federation. According to the report:

According to a new report from the Wisconsin Budget Project, passing the Dream Act and establishing a pathway to citizenship for immigrant youth would help Wisconsin farms and communities by:

Wisconsin’s population is getting older and more concentrated in urban areas of the state, making it harder for employers in rural areas to find workers. Supporting Wisconsin’s immigrant workers through policies like the Dream Act can benefit both immigrants, businesses, and communities. A report from COWS highlights the payoffs to supporting immigrant workers:

“We have a chance, as a state, to begin considering education, training, and labor market policies that can support immigrant workers in making a steady transition toward greater financial stability. Such policies will help create opportunity in our economy while building the skills that employers need. Such policies can help build a floor under labor standards to ensure that the state’s best employers are not undercut by unscrupulous actors willing to undermine labor standards by subjecting immigrants to illegal conditions or outright wage theft. Such policies help build a stronger Wisconsin for all of us.” (Increasing Skills and Opportunity for Wisconsin’s Immigrants, COWS, March 2016.)

For more information, read the Wisconsin Budget Project’s report about how passing the Dream Act would allow young immigrants to contribute fully to Wisconsin’s economy and help farmers find the workers they need.