By Edgar Mendez, Milwaukee Neighborhood News Service - Dec 21st, 2017 10:36 am
Get a daily rundown of the top stories on Urban Milwaukee 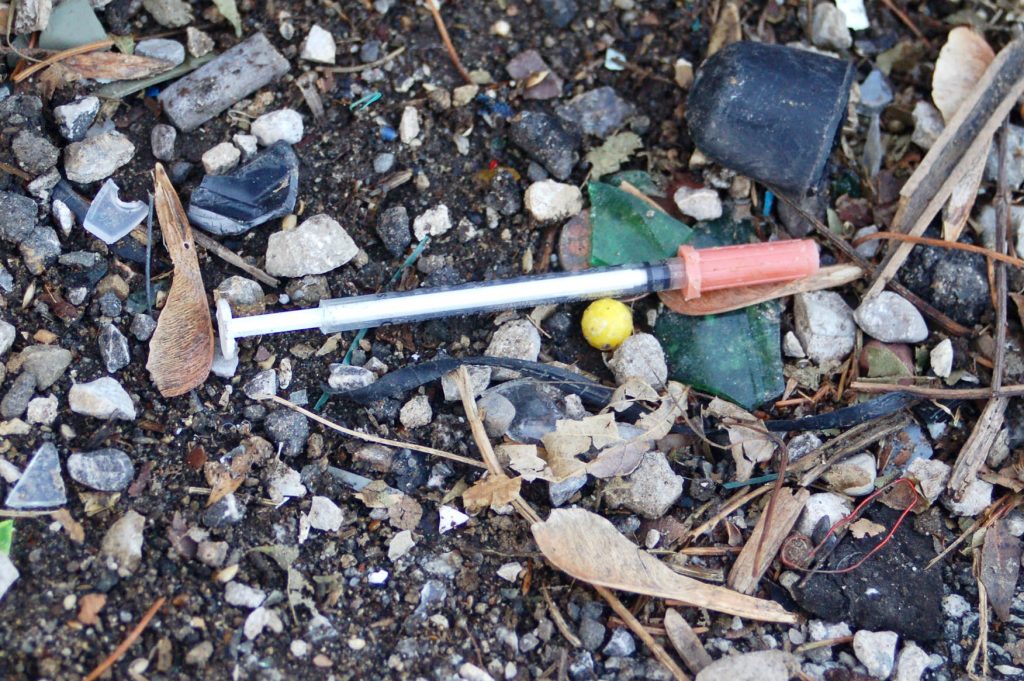 A discarded needle in an alley on the 2300 block of West Orchard Street on Milwaukee’s South Side. Photo by Edgar Mendez.

The death toll in Milwaukee County from opioid overdoses has reached 302, according to data from the Milwaukee County Medical Examiner’s Office. That number will rise once toxicology determinations in 35 other suspected drug-related deaths are made.

In response to the high number of deaths, the Milwaukee Police Department (MPD) last week announced it would be creating a 16-officer task force to more quickly investigate fatal overdoses.

“Their (officers’) full-time job is going to be to identify the suppliers in overdose deaths,” said MPD Chief Ed Flynn, during a press conference announcing the new task force.

The deaths in Milwaukee are part of a national increase in opioid related deaths and addiction. The epidemic has hit Milwaukee County especially hard, with drug- related deaths expected to top 420 this year, according to Ald. Michael Murphy. Last year, 342 drug-related deaths, a great majority involving opioids, occurred in the county, up from 110 in 2002. 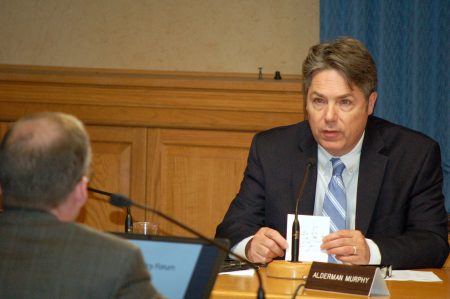 While the city tries to come to grips with an epidemic and a death toll of historic proportions, the City-County Heroin, Opioid and Cocaine Task Force, created in late January in response to the crisis, has struggled to meet, cancelling four of 12 meetings scheduled this year. The most recent meeting was to be held on Dec. 15, just one week after a 24-hour-period in which eight suspected opioid overdose deaths occurred in the county.

Rafael Mercado, one of the creators of the MKE Heroin Diaries Facebook page and a member of Team Havoc, sent out several warnings on social media about a bad batch of fentanyl he suspects was behind the spate of deaths.

One warning read, “please let your family, friends, and neighbors know we have another bad batch of fentanyl-laced heroin going around.”

Opioid Task Force Chairman and Milwaukee Health Department (MHD) Commissioner Bevan Baker, described that day as one of the most harrowing he can remember.

“I have never witnessed anything like it. It was one of the most difficult things I’ve ever dealt with in terms of drug-addiction and human loss,” Baker said.

Cari Kegley, a Greenfield resident who has attended several opioid task force meetings,  said sheCari Kegley was devastated to hear about the most recent spate of deaths and angry that the task force cancelled its latest meeting in the wake of it. She said she wants to see the task force take action.

Baker said it was unfortunate that task force members were unable to meet last week and that it had been difficult to schedule a meeting with the upcoming holidays and other conflicting commitments. The task force comprises several top county officials, including Brian Peterson, chief medical examiner, Michael Lappen, chief of the Behavioral Health Division, and Christine Westrich, director of the Office for Emergency Management. The task force also has several other high-profile members, including Murphy, Ald. Khalif Rainey and St. Francis Mayor CoryAnn St. Marie-Carls.

According to Lappen, the most recent meeting, as well as two previous meetings, had to be cancelled due to lack of a quorum. He wrote in an email to Milwaukee Neighborhood News Service that it has been a challenge to accommodate the hectic schedules of task force members.

The fact that top-level officials constitute the majority of the task force has presented problems, admitted Murphy, who said he was disappointed that last week’s meeting was cancelled.

“Perhaps were we to do it over again or change something in the future we would have other designees, but we felt originally that we wanted to have the top people at the table but everybody’s so darn busy,” Murphy said.

The task force did meet on Dec. 1, and has a meeting scheduled for Jan. 19, he added.

Meanwhile, the task force is on track to meet its goal of having a comprehensive plan to combat the opioid epidemic completed by February, according to Baker. Baker said the general public should know that tasks are being completed by task force members and others behind the scenes.

“We cancelled the meeting but we are not resting. Tremendous efforts are being made,” Baker said.

According to Sarah DeRoo, health communications officer for MHD, six workgroups have been tasked with specific goals. Among them are increasing the availability of naloxone, a medication that rapidly reverses the effects of an opioid overdose; promoting understanding of pain, pain management and substance abuse disorders; improving data on heroin, opioids and cocaine; and assuring adequate and affordable access to treatment for substance abuse disorders.

Murphy is a member of the workgroup charged with enhancing community options for medication disposal. Current options include medication drop-off sites and the Drug Mailback Program in conjunction with CVS Pharmacy, in which residents can dispose of medications by placing them in their mailbox in a secure envelope, Murphy said.

The group is also actively seeking funding to support its initiatives and is reaching out to hospitals and pharmaceutical companies, among others, Murphy added.

The increased funding and subsequent efforts to combat opioids can’t happen fast enough for Kegley, who is calling for more consistency from the task force and more resident involvement.

“They (the task force) need to quit being so sporadic and the community needs to attend the meetings and fill the room,” Kegley said. “I saw someone overdose at the gas station on Saturday. This problem is out of control!”