The Decline of South Side Taverns

About 40% of near South Side taverns in two zip codes have closed since 2012.

By Edgar Mendez, Milwaukee Neighborhood News Service - Dec 12th, 2017 11:08 am
Get a daily rundown of the top stories on Urban Milwaukee 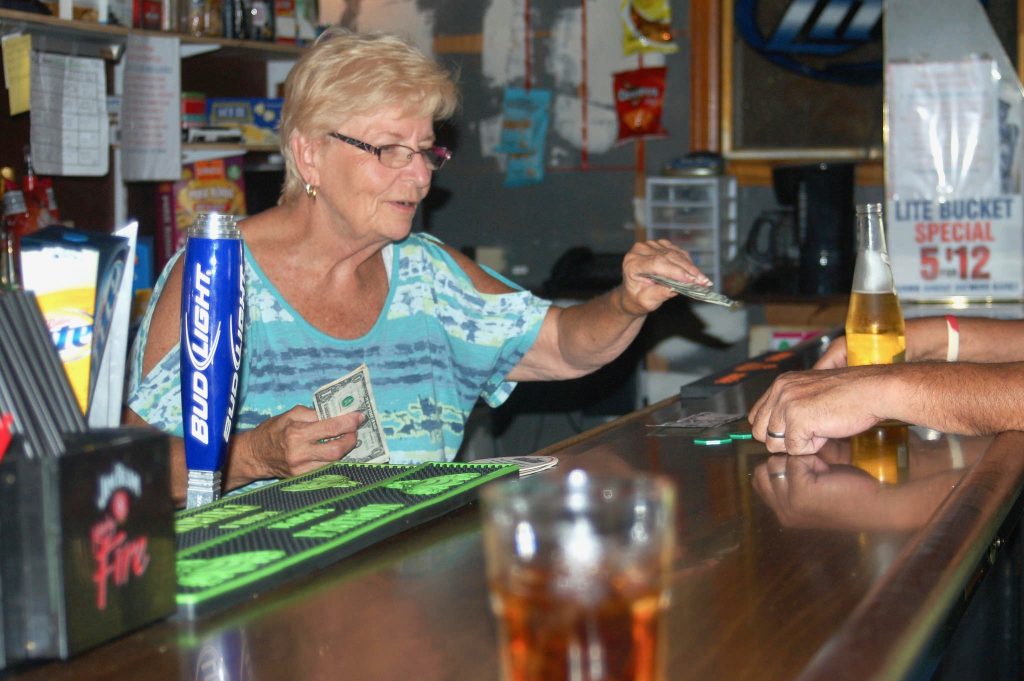 Sharon Ward, Safe Ride coordinator and treasurer of the Milwaukee County Tavern League, tended bar at The Last Drop, 1979 S. 15th St., until it closed a few months ago. Photo by Edgar Mendez.

In the late 1970s and ‘80s business was so good at Orchard Inn, a neighborhood pub on South 3rd Street and West Orchard, pool leagues ran morning, evening and midnight to accommodate three shifts of blue-collar workers who strolled in from nearby factories including Allen Bradley—now Rockwell Automation and Grede Foundries — since closed, recalled its former owner Sharon Ward.

When Ward, SafeRide coordinator and treasurer of the Milwaukee County Tavern League, and her late husband purchased Orchard Inn in 1975, it was one of thousands of neighborhood pubs in Milwaukee, she said. Like many others it served a vital function for patrons looking to catch more than just a buzz.

“The corner bar was the area’s social hub; it’s where you felt the pulse of the neighborhood and found out what was going on in your community,” Ward said.

Parents knew each other’s kids and kept a watchful eye, holidays were celebrated together there and when a family was having a tough time financially they turned to their friends at the bar for help, she added. But in the city that once touted itself as the “beer capital of the world,” and is still home to MillerCoors, the tavern culture generations of Milwaukeeans grew up with is fading away in some neighborhoods, as an older, simpler style of life moves to the slow lane to accommodate the accelerated pace of today’s society. 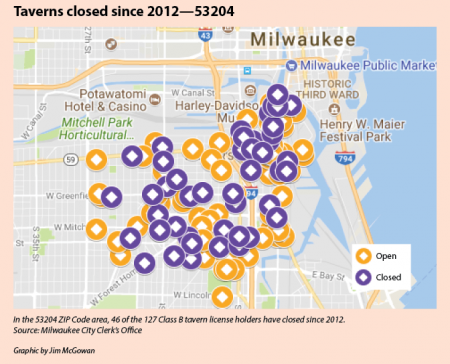 Nowhere is that change more evident than Milwaukee’s South Side, where day care centers, houses of worship, corner stores and residences occupy properties that for decades had been bars. A drive down South 13th Street or West Cleveland Avenue serves as a reminder of just how prevalent corner bars were at one time, and provides evidence that many old-time bars are now closed. Faded marquees and other signage are all that is left.

According to a Milwaukee Neighborhood News Service analysis of data provided by the City of Milwaukee, 40 percent of businesses with tavern licenses in 2012 in the 53204 ZIP code (which includes the Walker’s Point, Walker Square and Clarke Square neighborhoods), where Orchard Inn was located, and the neighboring 53215 ZIP code have now closed for any reason. In 53215 (which includes the Polonia, Lincoln Village and Silver City neighborhoods), 40 of 85 taverns, including stalwarts such as Ducky’s, Grady’s Saloon, Kornerstone Pub, and Frank and Barb’s Silver City Bar, have closed in the past five years (see accompanying maps).

“Back in the day you could walk to a bar on every corner and it’d be busy. Didn’t matter if it was 8 in the morning or 8 at night,” recalled Brian Schmidt, as he sipped from an 8-ounce tapper of Pabst at Richies Pub, 1998 S. 11th St. Richies is one of a dwindling number of South Side bars that have been open for decades, said its owner and namesake, Richie Dobs. He’s stayed in the bar business by keeping his prices low and hiring good bartenders, though he plans to retire soon and hopes to find a new owner for the bar, which typically closes by 7 p.m. and serves a racially mixed clientele that includes blue-collar workers and retirees.

Jim Rydzewski, owner of Bob-E-Lanes, 2932 S. 13th, bought his tavern/bowling alley from his parents in 1981. He said he’s seen many a bar in the neighborhood close during the three and half decades he’s been in business.

“Yeah Nick down the block, he died so his bar closed,” said Rydzewski, pointing south. He’s in his 60s now, and said he also hopes to find a new owner when he’s ready to retire in a few years. 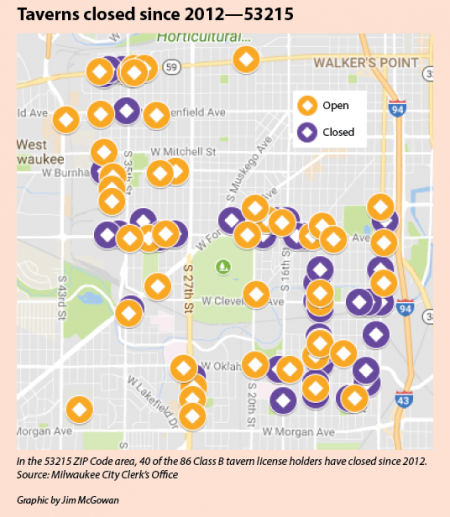 “It would be a shame for this place to close after all the money I spent improving it,” he said of the bar, which runs daytime pool leagues daily and in the morning every other Monday.

Not everyone views a decline in the number of bars on the South Side as a negative. Ald. Jose Perez, who represents the 53204 ZIP code, said one of his memories growing up in the Walker Square neighborhood was seeing a dead body lying in the street outside of a tavern on South 10th Street and West Walker. Perez said his mother collected signatures in the neighborhood to have the bar shut down.

“Bad things happen at bars and they have for a long time,” Perez said.

In addition to increased crime, which has made some neighborhood pubs less desireable to visit or run a business in, the corner bar in Milwaukee is becoming a relic for a number of reasons, according to James Draeger, historic preservation officer for the Wisconsin Historical Society and author of the book, “Bottoms Up: A Toast to Wisconsin’s Historic Bars and Breweries.” The long list includes issues related to licensing, tougher drunken driving laws sparked by the Mothers Against Drunk Driving movement, and ironically an increase in driving, which opened up the city for residents to visit bars in other areas, whereas in the past they likely would’ve walked down the block.

“A lack of transportation in the early 19th century created a legacy of walkable neighborhood taverns in Milwaukee,” Draeger said. In addition, he said, tenements and small houses in 19th century Milwaukee limited the ability for people to host friends, which made the tavern a more suitable place to get together.

There are other basic reasons for the decreased number of bars that are associated with modern times, such as more entertainment options and the fact that mass communication has made taverns less critical to social life, Draeger added.

“Taverns aren’t really about the drinking; they exist because of the social life of the tavern. People want to meet people, or meet with friends and those functions were as relevant today as they were 50 years ago, but people do it in many different ways now,” Draeger said.

The industrial crash that began in the ‘70s and continues today devastated many local communities and the taverns that served them. 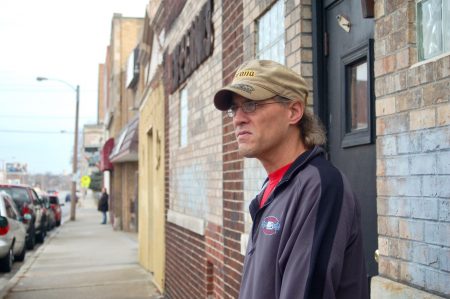 “We lost tool and die makers, mechanics, laborers and machinists. When we lost a big chunk of the labor pool we lost a bunch of customers as well,” said Ward, who tended bar at The Last Drop on South 15th Street and West Rogers until it too closed a few months ago.

Ward and her husband purchased the bar in 1985 and ran it as Wardski’s until she sold it in 2009. She stayed on as a day-shift bartender until it closed, serving the aging client base she’d built for decades consisting almost entirely of retirees.

A decline in customers and profits made running a neighborhood tavern less attractive to the next generation, she said, so when tavern owners died or were too old to run their pub, their kids didn’t want it.

“The next generation didn’t see the value in owning this type of business nor putting in the time and effort it takes because it’s a 24-hour-job. They went to college instead,” Ward said. Rydzewski said his kids helped out at the bar when they were younger, but they wouldn’t be taking over the family business either. “They all got kids and are married. They got good jobs. They’re not interested in running this place,” he said. 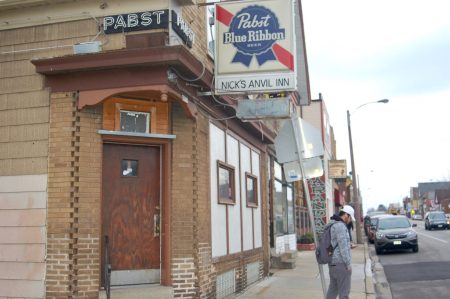 A closed bar on South 13th Street in the Polonia neighborhood. Photo by Edgar Mendez.

Despite the decline in neighborhood pubs on the South Side, the number of businesses with a tavern license in the city increased from 1,096 in 2001 to 1,356 in 2016, according to data provided by the city. Those numbers could be inflated. The Milwaukee Neighborhood News Service found many are actually closed. Much of the new business can be attributed to an increase in the number of specialty bars such as Drink Wisconsinbly Pub & Grub, Oscar’s Pub & Grill, Buffalo Wild Wings and other locations that generate business from food, craft cocktails and a large selection of tap and bottled beers, said Draeger.

One example of a traditional-turned-specialty bar is the popular Walker’s Point pub, Steny’s Tavern & Grill, 800 S. 2nd St. Jerry Steny opened the bar in 1985 and said that at the time Walker’s Point was the top bar area in Milwaukee. Eventually though, his younger clientele shifted to Water Street downtown and Brady Street on the East Side when crime increased in the ‘90s and 2000s.  The bar struggled until his son Ryan Steny came aboard in 2010 with the idea to specialize in craft beer and sports. Business has been booming since.

“It’s important to set yourself apart from the rest. Competition is fierce and you need to stand out,” Steny said.

Those who didn’t innovate and were resistant to change, including many older tavern owners, haven’t survived as a result, Draeger said.

The newer bars that are chains, leased or run by general managers and others who don’t live in the neighborhood are a far cry from the days when bars hosted block watch meetings and Christmas dinners, said Ward. The evolution of bars such as Steny’s and the influx of chains has dealt a heavy blow to the neighborhood pub, one from which it’s unlikely to recover, said Ward.

“Those days are gone. Running a bar in the neighborhood was a good way of life and a good thing for the neighborhood. But our bars are dying off and we’re dying with them,” Ward said.

7 thoughts on “The Decline of South Side Taverns”