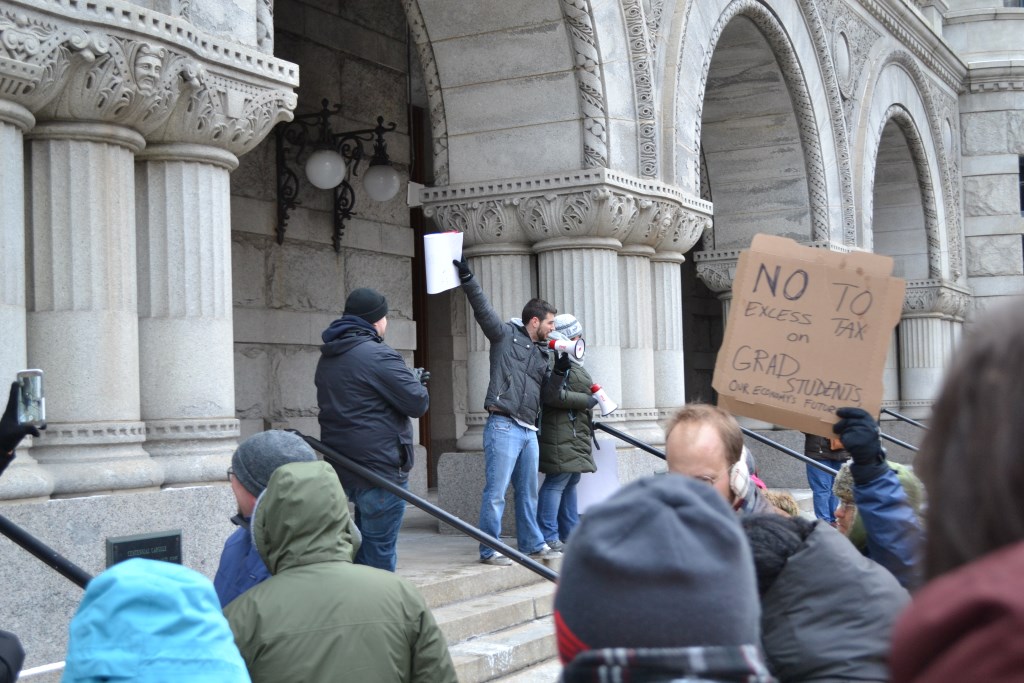 “No to excess tax on grad students our economy’s future.” Photo by Brad Poling.

On a snowy Saturday morning, Pere Marquette Park held the largest meeting of Marquette and UW-Milwaukee students in recent memory.

Organizers at the rival universities rallied over 100 participants to deliver a petition to Senator Ron Johnson’s office decrying the GOP’s tax bill, which may repeal a vital provision for graduate students.

Without the provision, Section 117(d)(5) of the current tax law, graduate students would be required to pay taxes on tuition waivers, the funds that cover their tuition in exchange for work done at the university. The House bill, passed on Nov 16, would reclassify these waivers as income, a move that could increase taxes for Wisconsin students by thousands of dollars. 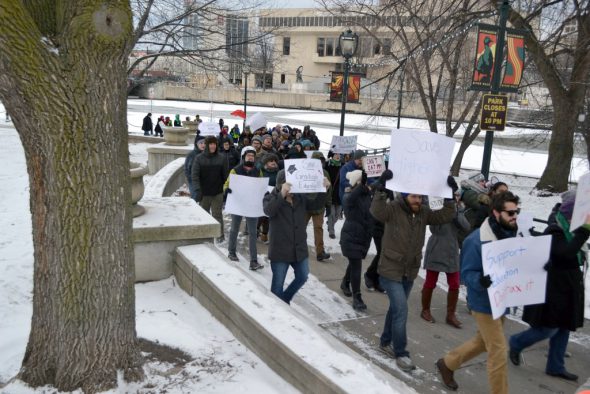 With graduate stipends typically falling between $12,000 and $17,000 for UWM grads, or $17,000 to $23,000 for Marquette grads, the increased tax burden is so severe that many students have questioned whether they would be left without the financial ability to complete their degrees.

The proposal threatens the future of grad students, said Reed Heintzkill, a UWM graduate student. “I’m fairly certain there’s a general feeling among grad students, and probably college students in general, that politicians at the state and national level not only don’t have our interests in mind, but in many cases, are rooting against us.”

Not all politicians, though: the rally featured speeches from state lawmakers Jonathan Brostoff and Lena Taylor, both Democrats from Milwaukee, who echoed the students’ outrage.   “How can you call those scholarships – those waivers – income?” Taylor said. “If we can spend $3 billion on FoxConn, how can we not make sure people have a higher education, so they can get those jobs?”

Marquette professor Tim McMahon, in a speech expressing solidarity with graduate students, shared a similar vision of the bill’s stakes.

“If this [bill] gets through, you’re going to see your taxes go up by something on the order of $3,000. That is not tax relief,” McMahon said to ralliers. “If you aren’t getting advanced degrees, and future generations aren’t getting advanced degrees, not only is higher education at risk, but industry is at risk. Really, the entire economy is at risk.”

The demonstration was only the most recent of several weeks of nationwide protests against the GOP tax bill, which was narrowly passed by the House of Representative on Nov. 16 and the U.S. Senate just 15 days later. During that time, graduate students have organized walkouts and rallies at more than 60 campuses across the country.

The sustained outcry against the graduate tax appears to be making an impact.

Thirty representatives, all Republicans, have joined Texas Congressman Pete Sessions in opposing the tuition tax, citing the damage such a tax could do to the economy.

In a letter to House and Senate leaders, the 31 representatives argued that “a tax on graduate tuition would be unfair, would undermine our competitive position, and would inhibit the economic growth that tax reform promises.”

For Milwaukee students, the goal now is to keep the pressure on Sen. Johnson, who was an early holdout on the GOP tax bill.

Bill Langhoff, a UWM graduate student, reminded his peers of the stakes:   “Until we organize together to stand against this assault, they will continue to take from us again and again,” he said in a speech to fellow protesters.

“When you go home today, don’t be done. This is just getting started.”