The Rise of a Partisan Supreme Court

It’s supposed to be non-partisan. How and why did this change?

Historically, Wisconsin has been careful to separate partisan offices from non-partisan ones. This intention extended to the election calendar–partisan offices in November, nonpartisan in April. Among those elected in the April nonpartisan elections are judges, in the hope that voters put aside partisan preferences and choose based on integrity, skill, and intelligence. 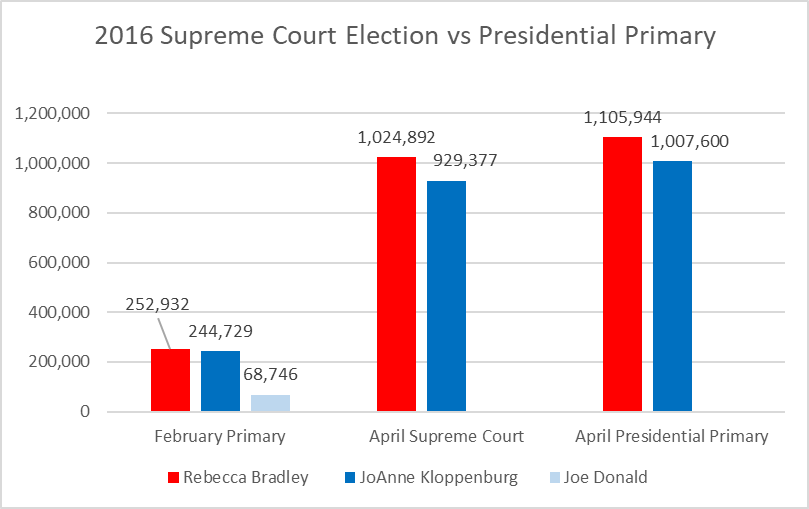 Two conclusions seem obvious. First the large jump in turnout between the February primary and the April general election was generated by the simultaneous presidential primary. Second, a key reason JoAnne Kloppenburg lost is because turnout in the Democratic presidential primary was less than turnout in the simultaneous Republican primary. This spring’s election for Supreme Court is shaping up as more of the same, with the outcome likely based on turnout.

The Supreme Court race has become increasingly partisan since the Wisconsin Manufacturers and Commerce, long a non-partisan pro-business group that changed into a pro-Republican group, began spending millions to elect conservative candidates like Annette Ziegler (in 2007) and and Michael Gableman (2008).

I submit that the liberal/conservative or Republican/Democratic dichotomy that has arisen in judicial elections serves Wisconsin poorly. Much more relevant is whether a judge has a passionate desire for the truth.

The effort to shut down the John Doe investigation of coordination between the Scott Walker campaign and various ostensibly independent groups owes its success to the ability of the investigation’s opponents to convince several judges to accept a myth: that so-called “independent” groups are free to coordinate their efforts with candidates so long as they don’t explicitly endorse the candidate (or the defeat of the opponent).

This myth was exploded by a unanimous 3-judge panel of the 7th Circuit Court of Appeals, writing:

… the Supreme Court has stated repeatedly that, although the First Amendment protects truly independent expenditures for political speech, the government is entitled to regulate coordination between candidates’ campaigns and purportedly independent groups.

… No opinion issued by the Supreme Court, or by any court of appeals, establishes … that the First Amendment forbids regulation of coordination between campaign committees and issue advocacy groups …

“Issue advocacy” is a term often used to identify political communications that don’t explicitly endorse a candidate. Despite the innocuous-sounding name, it can be applied to communications that are highly partisan. (See this 2014 Data Wonk column for a more detailed discussion of the Supreme Court’s rulings related to coordination.)

Despite the lack of support in the US Supreme Court’s election funding decisions, the myth that the First Amendment forbids regulation of coordination between campaign committees and issue advocacy groups lives on. David Rivkin, the lead attorney for those intent on closing down the Doe investigation, had substantial success in convincing several judges that it represented an accurate interpretation of the US Constitution. The reasons for Rivkin’s success seem to have varied from judge to judge:

Not every conservative judge bought into Rivkin’s theory. Judge Frank Easterbrook, who wrote the Court of Appeals decision rejecting the theory, was nominated by President Reagan and is widely regarded as conservative. The late Justice Patrick Crooks, who leaned conservative, wrote a blistering dissent, accusing his colleagues on the Wisconsin Supreme Court of “erroneously concluding that campaign committees do not have a duty under Wisconsin’s campaign-finance law … to report receipt of in-kind contributions in the form of coordinated spending on issue advocacy.”

The John Doe investigation will continue to echo in the future. It is a handy test for whether judicial candidates put a priority on the truth and can think for themselves. For example, Michael Screnock is running for the Wisconsin Supreme Court in this spring’s election. Screnock is clearly a conservative, having been arrested for blocking an abortion clinic and helping, as an attorney with Michael Best, to develop Wisconsin’s Republicans-favoring gerrymander. Yet he argues that, if elected, he can put aside his partisan preferences and rule based on law.

The Doe investigation offers a useful test of his assurance. When asked by the Journal Sentinel about the Doe investigation, he responded that the court found prosecutors could not investigate activities that that are not illegal. “Do I think that’s an accurate statement of the law?  Yeah.” His willingness to repeat Rivkin’s myth does not bode well for his commitment to independently search out the truth.

The second implication for the future is that in order to stop the investigation, the Wisconsin Supreme Court had to change Wisconsin law. Campaigns for state office, but not federal office, will be operating in an environment where there are no effective limit on the size of political contributions, so long as they are funneled through ostensibly “independent” groups. The first test of this new regime comes in next year’s election for governor. Will Walker take advantage of it and openly tell the outside groups how to best support his election? Will his Democratic opponent? What difference will it make if they do?

Skeptics may argue that the effect of unlimited contributions is minimal. Campaigns for federal office have lived with these restrictions for years. To get around the restrictions, they establish an ostensibly-independent “Super PAC,” staffed by operatives who are close to the candidate, understand his or her thinking, and don’t need to consult with the official campaign. However, this arrangement is at best cumbersome and at worst fatal to the campaign. One theory about the quick demise of Walker’s 2016 presidential campaign is that by losing his former campaign manager to his Super PAC he lost his most trusted advisor.

Finally, shutting down the Doe investigation may turn out to be a test run to shutting down Robert Mueller’s investigation of Donald Trump’s ties to Russia. Rivkin was initially a Trump opponent but more recently has become a Trump enabler. He argued in the Washington Post that its unrealistic and unfair to make Trump use a blind trust. In the New York Times, Rivkin argued that the justice department and FBI should investigate Democrats.

A Times article about the possibility of Trump shutting down the investigation of Russian influence on the election quoted Rivkin:

As a policy matter, I would’ve said a few months ago that it was a bad idea. But with what’s going on in the Russia investigation, I am not sure that this is true anymore.

Recently Rivkin argued in the Wall Street Journal that Trump could issue a mass pardon to those caught up in the investigation:

A president cannot obstruct justice through the exercise of his constitutional and discretionary authority over executive-branch officials like Mr. Comey. If a president can be held to account for “obstruction of justice” by ending an investigation or firing a prosecutor or law-enforcement official — an authority the constitution vests in him as chief executive — then one of the presidency’s most formidable powers is transferred from an elected, accountable official to unelected, unaccountable bureaucrats and judges.

Once Wisconsin was known as the pioneer of reforms that made both the state and the nation more democratic. Nowadays Wisconsin’s influence on the national character seems almost the contrary.

2 thoughts on “Data Wonk: The Rise of a Partisan Supreme Court”