Blacks are three times more dependent on transit to get to jobs than whites. 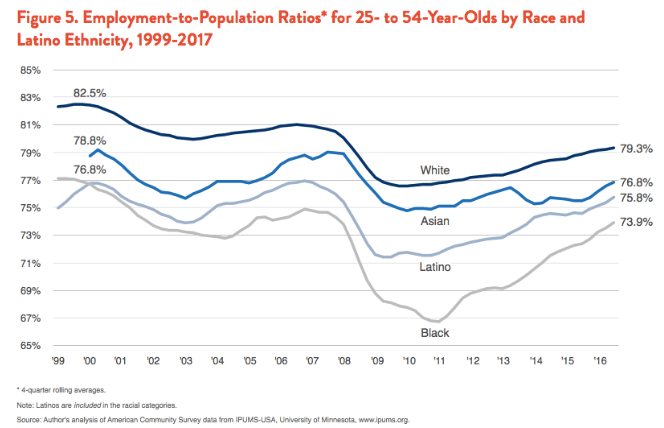 Despite the decline in the jobless rate, the employment scenario for many Americans isn’t what it used to be. Many people of working age remain without jobs, and the problem is particularly acute for people of color.

Among white Americans between the ages of 25 and 54, about 79 percent are employed. The rate among black, Asian, and Latino Americans remains significantly lower.

Improving transit access to jobs can be a key tool in closing that gap, according a new report from Algernon Austin at Demos, because people of color are more likely than white people to rely on transit to get to work.

The share of Asian and black workers who commute by transit is more than three times higher than the rate among white workers. And for Latino workers the rate is more than twice as high. 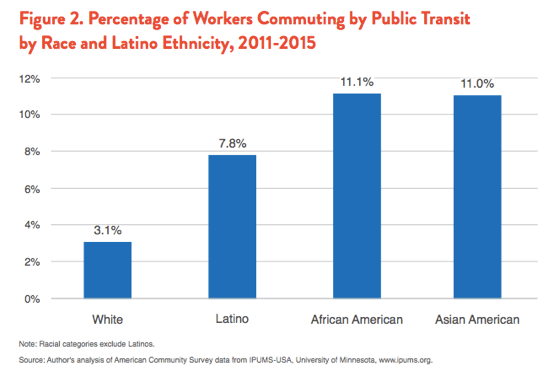 Percentage of Workers Commuting by Public Transit by Race and Latino Ethnicity, 2011-2015

This disparity reflects differences in car ownership rates, and it persists across different metro areas. But in some regions, it is even more pronounced. Black workers in Detroit commute via transit at 13 times the rate of white workers (partly explained by the region’s extremely low transit ridership among white workers). In Miami, the ratio is six to one, and in Atlanta, Dallas, and Phoenix it is five to one.

By improving job access for people without cars, Austin argues that transit can reduce racial disparities in employment. To do that, it is crucial that transit investments specifically benefit workers who are sidelined in the current economy.

The Public Policy Forum found there are 29 “job centers” in four-county metro Milwaukee, locations where there are at least 10,000 jobs, and more than a third — 11 job centers which employ more than 204,000 people — are outside Milwaukee County and relatively inaccessible for workers from this county. Better bus connections to Waukesha County, and more cooperation between the Milwaukee and Waukesha bus systems is needed, the study found.

Similarly, Detroit’s job centers are located throughout the region, but there is no regionally-coordinated transit service. Black transit commuters are twice as likely to spend more than an hour getting to work than white riders. A measure on the ballot in 2o16 that would have funded better regional transit service was narrowly defeated at the polls.

Investment in transit can also help close the racial employment gap through job creation, writes Austin. While black workers are under-represented in construction compared to white and Latino workers, most jobs that result from infrastructure investment are in other occupations. In earlier research for the Economic Policy Institute, Austin concluded that infrastructure spending focused on transit yields the mix of job most favorable to black and Latino workers.