New study shows no way for workers to get to jobs. What are its solutions? 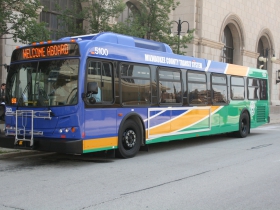 A new study by the ever-busy Public Policy Forum finds the Milwaukee metropolitan area is badly disconnected, with no way for many workers to get to jobs in outlying counties. The study “confirms the long-held notion that public transportation services are limited or non-existent in many suburban job centers” in the four-county metro area, its authors state.

The study offers suggestions on both long-term and short-term solutions to a problem it admits is not easily solved.

Here is the problem in a nutshell: The report finds there are 29 “job centers” in the four county area, locations where there are at least 10,000 jobs. More than a third — 11 job centers which employ more than 204,000 people — are outside Milwaukee County and relatively inaccessible for workers from this county.

Why can’t workers get there?

-Cuts in service by the Milwaukee County Transit System have resulted in a 22 percent decline in total annual bus miles between 2000 and 2012, causing “tens of thousands of jobs to become inaccessible via public transportation.”

-Attempts by cooperation between Milwaukee County and Waukesha county bus systems, and between government and private employers, are complicated and difficult to achieve and have had little success.

As  a result, the authors note, “While transit-accessible downtown Milwaukee has the highest concentration of jobs among the region’s zip codes,” many of the 29 zip codes that are the biggest job centers are not very accessible.

Of the four counties in the metro area, “Washington County is the least accessible by transit,” the report notes.

Connecting workers to jobs in such areas is not easy because:

-“Many suburban industrial parks… are isolated from other land uses that generate transit riders and thus are unable to meet typical measures of transit service productivity.”

-“Funding for trial routes is available through special federal programs, but those routes are difficult to sustain after initial funding runs out.”

The report nonetheless looks at the potential to extend or improve Milwaukee county bus routes to adjoining suburbs, while noting that any such plan must take into account the bus system’s typical gauge — the productivity of “passengers per bus route” — which is calculated by dividing the total number of passengers on a given route by the aggregate number of hours buses are in operation on that route. The general standard used by Milwaukee’s system is that “a bus route must produce at least 22 PBH to be considered productive enough to be maintained.”

Route extensions to suburban job hubs, rather than new routes are most likely to meet this standard, the report finds. For instance, restructuring the bus service to better connect workers to jobs in Oak Creek, would cost an additional $1.2 million annually, or $540,000 annually for a more service efficient model. Better service on an express route from UW-Milwaukee to Downtown to Brookfield Square would cost $1.2 million extra per year. But given the cuts in federal grants that have occurred, the only potential funding source would be the Milwaukee County property tax, the report notes.

The complications involved in private/public transit partnerships are illustrated by Milwaukee’s Route 6 bus line, which connected Milwaukee with West Allis and New Berlin, serving the Quad/Graphics plant in West Allis and the New Berlin Industrial Park. “Funding for the route was provided by Quad/Graphics, Waukesha County, and Milwaukee County. In 2004, both Quad/Graphics and Waukesha County decided to discontinue funding for the route because of declining ridership. At that point, Milwaukee County no longer could justify funding the route on its own, so the route was eliminated.”

Other solutions developed during the past two decades have included commuter van pools, shuttle services, and car-purchasing programs, which “can transport workers to suburban job locations in a manner that is more flexible and individualized than fixed-route bus service. To date, however, these services have operated on a relatively small scale and have had mixed results,” the study notes.

All of which brings us back to the central problem, that suburban and particularly ex-urban development has been structured in a way that makes homes unaffordable for potential workers, doesn’t offer them much in the way of apartments or rental units, and locates businesses in areas that are not easily connected via fixed bus routes. “From a workforce and economic development perspective, therefore, it should be an imperative for governments to encourage businesses with workforce challenges to locate in or near higher-density areas where public transit services already exist or where new transit connections could be sustained,” the study concludes.

Brave words, but are they likely to have much impact? We’ll see.

This study was tightly controlled and released a day ahead of time to the Milwaukee Journal Sentinel. I suspect this was done because the Public Policy Forum’s last report, on the financial needs of cultural and recreational groups, was leaked to me ahead of time. As I noted then, the study was only going to be shared with the Journal Sentinel and the Business Journal, and some may have felt those publications would not take as critical a look at the issue of funding for a new NBA arena.

So this time the PPF made sure only the Journal Sentinel got the report a day ahead of anyone in the media. PPF President Rob Henken says there is nothing new about this and that his organization has done so at times when there is a media specialist they want to give first access. “In this case, the JS has always had a reporter who specializes in transportation, so we offered it to her.”

Whatever the reason for this decision, I don’t think the strategy worked so well. The newspaper did a brief, ten paragraph story on the study that all but shouts out the message: this report is not very important.

At some point the powers that be will decide to treat all the media in town equally and give equal access on new studies and breaking news. After all, these are subjects that concern all of us in the community. But until such time, we’re confident Urban Milwaukee will find a way to report on these issues.