Our photos capture it. See inside one of 34 suites in the new arena.

“It’s gone from the beer barrel/taco stand discussion to an incredible landmark building for the city of Milwaukee.”

So said Milwaukee Bucks president Peter Feign about the team’s new arena, on a media tour of the building. The arena, which some have derided for looking like the Humboldt Ave. Bel Air Cantina, is now 68 percent complete, he notes, and Feigin wants all of Milwaukee, including those detractors, to know how incredible the building is going to be.

Friday’s tour, one of many the Bucks have taken the media on to highlight progress in the 17,500-seat, $524-million facility, highlighted the now enclosed atrium, recently installed ribbon board, a model suite and progress on reconstructing W. Juneau Ave. Almost 800 workers, led by Mortenson Construction, were on site during our tour as the public-private partnership is near peak employment.

For now, the arena is still known as the Wisconsin Entertainment and Sports Center. Feigin had no updates on a potential naming rights partner. He did disclose that the team would still offer any potential partner the right to place their logo on the roof of the building.

The new facility will feature 34 luxury suites, 33 loft suites, six group suites and three clubs. The team has already sold 29 of the suites, an impressive figure given that the Bucks won’t play their first game in the facility for nearly a year. The team is selling the suites on multi-year contracts, with annual prices starting in the $200,000’s. Similar to the setup at the BMO Harris Bradley Center, they’re located on a private level within the arena. The standard layout features two rows of five seats, with four more bar stool seats.

Showing off the suite, Feigin notes “this is our experimental lab in getting the suite absolutely correct before we move on.” There is a lot to work out. Beyond the seating, there are wall-mounted televisions, high-end countertops, and Sub-Zero appliances. Suite users can take advantage of an extensive array of in-unit food and beverage options.

The loft suites are on the same level as the luxury suites, but at a lower price and amenity package. There is no food and beverage area. Instead the seats, which come in groups of four or eight, are to be separated by heavy curtains from the other sections. The total capacity for the area is 170.

The team can begin to show off some of the interior elements now that an important milestone is just a week away. The arena will soon be completely sealed to the outside — good timing, with winter fast approaching, . 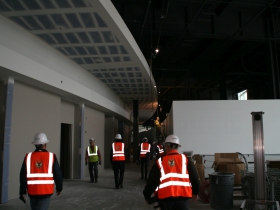 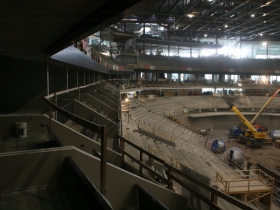 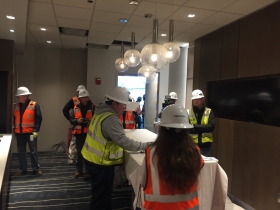 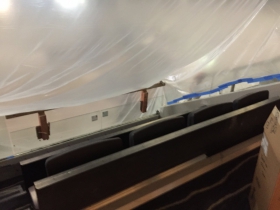 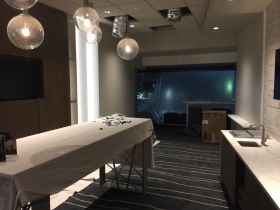 Standing near where center court will be, Feign noted the ribbon scoreboard has been installed. It will soon be joined by the center court scoreboard, which will take six weeks to assemble and then raise once it arrives in the coming weeks. The ribbon scoreboard rings the top of the 10,000-seat lower arena bowl and will provide additional messaging, similar to the one at the current arena. 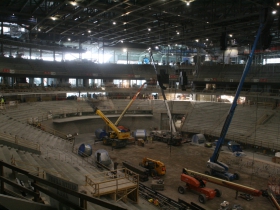 The east atrium, which is likely to get its own naming rights deal, is the central gathering space within the arena and one of its most attractive. It marks the transition from the open air plaza being built on the former N. 4th St. to the interior of the arena, and features nine escalators to facilitate the flow of guests between the four levels. Those escalators, all now in place, are being installed and configured by JCP Construction, one of the many city-certified Small Business Enterprise firms participating in the project.

As part of the city-financing component of the arena, the Bucks are required to spend 25 percent of the project budget with SBE firms and 40 percent of the project hours on city-certified Residents Preference Program participants. RPP is designed to hire under-employed or unemployed city residents. The team has consistently exceeded both targets for the project, and during the tour Feign noted they’re still on track.

Since I last toured the facility in early October the atrium has been enclosed in glass. With it now enclosed it’s possible to get a better feel of how significant the space will feel, with lots of open space and a constant flow of activity, even if it’s construction workers today instead of fans. 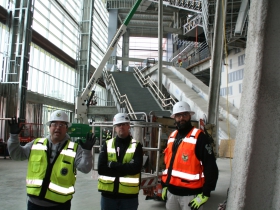 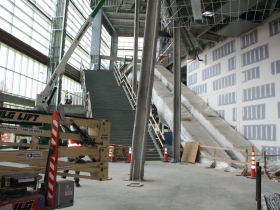 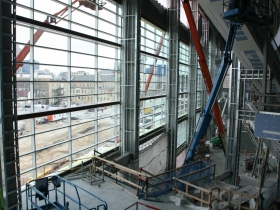 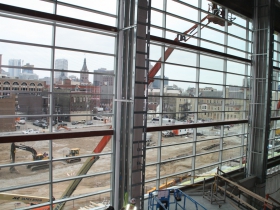 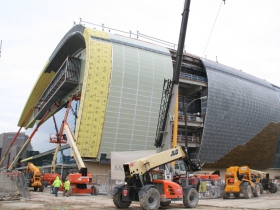 The north side facade of the arena is closer to completion, and with that, work is underway to rebuild W. Juneau Ave. The team is installing eight-foot-long bollards alongside a newly constructed sidewalk. The bollards, often found outside the front door of suburban department stores, are anchored many feet underground and serve to prevent vehicles from driving onto the sidewalk. Sprinkled throughout are a series of new streetlights, that will ultimately be joined by street trees.

While I have been critical of this area of the arena’s design (and it’s still way too early to render a final opinion), it’s encouraging that Feign made it a focal point on multiple tours. The team president says it’s one of many areas in the arena complex that will be receiving some of the 800 pieces of art the team has commissioned, primarily from Wisconsin artists. 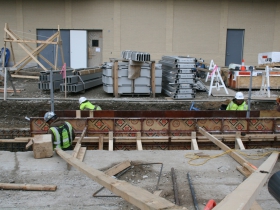 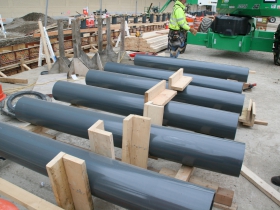 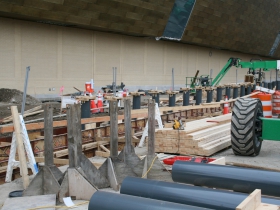 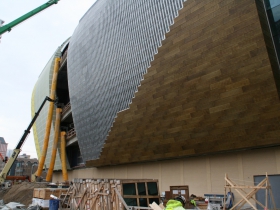 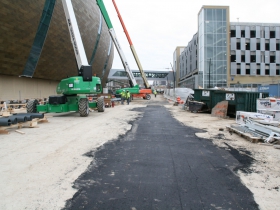 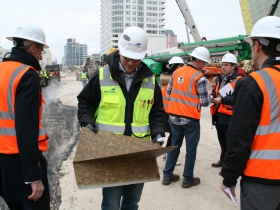