They lose child tax credit for 23 million children, including 159,000 in Wisconsin.

By Jon Peacock, Wisconsin Budget Project - Nov 15th, 2017 11:22 am
Get a daily rundown of the top stories on Urban Milwaukee

Paul Ryan. Photo from the Office of the Speaker of the House.

Congressional leaders misleadingly argue that their tax cut plan would benefit working families because it increases the maximum value of the federal Child Tax Credit (CTC). However, that part of the House bill completely excludes 159,000 children in Wisconsin whose parents work in low-paying jobs, according to a new analysis.

House leaders intend to hold a floor vote on their tax plan this week. The Senate tax plan is likely to be voted on after Thanksgiving.

About one in three Wisconsin children in working families would either be excluded entirely or only partially benefit from the proposed increase in the CTC, according new report from the Washington, DC-based Center on Budget and Policy Priorities.

Nationally, roughly 23 million children would be partially or entirely excluded from the House Republicans’ plan, even as it expands the credit to families with incomes between $150,000 and $294,000. Consider, for example: 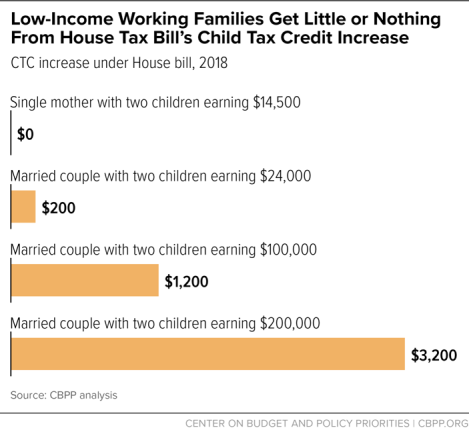 Helping families who are struggling to make ends meet gives children a better shot at success. Research indicates that boosting parents’ incomes helps kids do better in school, and makes them healthier and more likely to go to college. Leaving out low-income working families, while expanding the credit to include more high income families, makes no sense.

Late last week Senate leaders introduced their own tax plan, which makes similar changes to the Child Tax Credit, but expands it to an even larger number of wealthy Americans, while also providing a very small increase for low-income working families. More specifically, under the Senate bill:

Even as both bills limit the benefit or exclude children in families of low-wage workers, they are spending billions of dollars on large tax cuts for the wealthiest families and profitable corporations. According to the Institute on Taxation and Economic Policy, the wealthiest 1 percent of Wisconsinites would receive an average tax cut of $81,330 by 2027, when the plan’s provisions are fully in  effect. (See our recent blog post: What the Details of the Trump-House GOP Tax Plan Mean for Wisconsin Taxpayers, in Five Charts.)

The House bill’s tax cuts, like those in the Senate bill, would increase the federal debt by at least $1.5 trillion over the next decade. Congressional Republicans are likely to then use rising deficits to justify seeking large cuts in programs like Medicaid, food assistance for struggling families, education, job training, and college aid – programs that help everyday Americans make ends meet, access health care, and succeed in today’s economy.

In short, the Republican tax bill excludes millions of low-income working families. But when Congress gets around to paying for these tax cuts, those are the families that will bear the brunt of cuts in education, job training, health care, and other key programs.

Rather than rushing through such an unbalanced and fiscally irresponsible tax plan, Congress should develop and pass a bipartisan tax bill that helps all low- and middle-income workers and families, doesn’t cut taxes for the wealthy, and doesn’t increase the deficit.