Foxconn Signing Is a Love Fest

Walker rhapsodizes about the deal, and welcomes workers from Illinois.

The agreement on tax incentives between the State of Wisconsin and Taiwanese technology firm Foxconn was officially signed Friday, with a super excited Gov. Scott Walker leading the celebrations. The official signing was delayed nearly a month after major problems with the contract surfaced while the Wisconsin Economic Development Corporation looked it over.

While there are signs that Gov. Scott is downplaying the Foxconn deal outside Southeastern Wisconsin, that hasn’t been the case in the region where the plant will be built. Thus, in a style that has become typical of announcements for this project, the signing was performed with much fanfare and a slew of speakers.

It was held in Fortaleza Hall on the campus of SC Johnson’s corporate office, and the company’s CEO Fisk Johnson opened the round of speeches. He was followed by area congressman and Speaker of the House Paul Ryan, who called the project a turning point and said it was an achievement ensuring a brilliant and bright future for the children of southeastern Wisconsin.

Ryan offered thanks to President Donald Trump for his leadership on the deal and to Walker, as well as the Chairman of Foxconn, Terry Gou, while introducing him and noting “his enthusiasm for workers having good jobs,” and for technology and the American economy.

Gou previewed some of the technology that will be built and or assembled at the plant. The tech to be produced will center around 8k resolution and 5g network technology — the applications of which will be found in televisions, endoscopic healthcare equipment and high level facial recognition for surveillance systems.

The size of the plant was also noted with gusto. A favorite punchline at previous events was to describe the plant’s size as equivalent to 11 Lambeau Fields, but the new comparison is 15 Lambeau Fields.

And now that problems with the agreement are solved, the final contract sees Foxconn eligible for up to $2.85 billion on tax credits related to construction and manufacturing, plus a sales tax exemption that brings the total to $3 billion. Meanwhile the promised plant has shrunk in value from $10 billion to $9 billion. And in the event the company defaults on the agreement, Chairman Gou will personally assume a portion of the refund, along with two other guarantors. 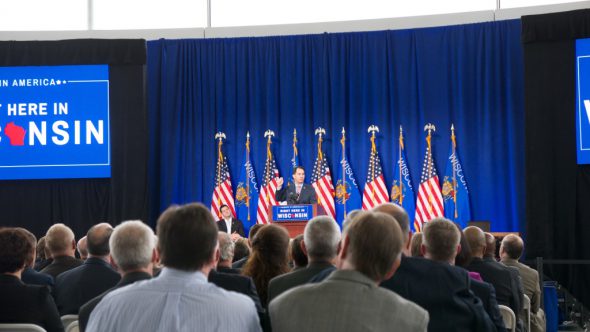 Walker closed out the show Friday with an excited speech in the style of an auctioneer. At one point, fully aware of the breathlessness of his speech, he said, “My father was a preacher, so I’m just getting started.” At another point he talked about how much he liked hawking the products Foxconn produces now that they will be produced in Wisconsin. “I could go on a sales pitch about this around the world,” he said.

Walker was speaking to a room of a couple hundred people, mostly men in suits: business persons, state and local politicians, university chancellors, Foxconn employees and many others anxiously awaiting the private and public cash likely to flow into Racine. Walker’s remarks sounded and felt like a campaign speech, as he ebulliently touted the best case scenario job projections of 13,000 factory jobs, 10,000 construction jobs and 22,000 jobs at spin-off businesses.

Opponents of the deal, like Democratic gubernatorial candidate Tony Evers, have questioned how many jobs will go to out-of-state workers.  That earned this riposte from Walker: “Will there be workers from Illinois? Doggone hope there are. We need them.”

4 thoughts on “Foxconn Signing Is a Love Fest”