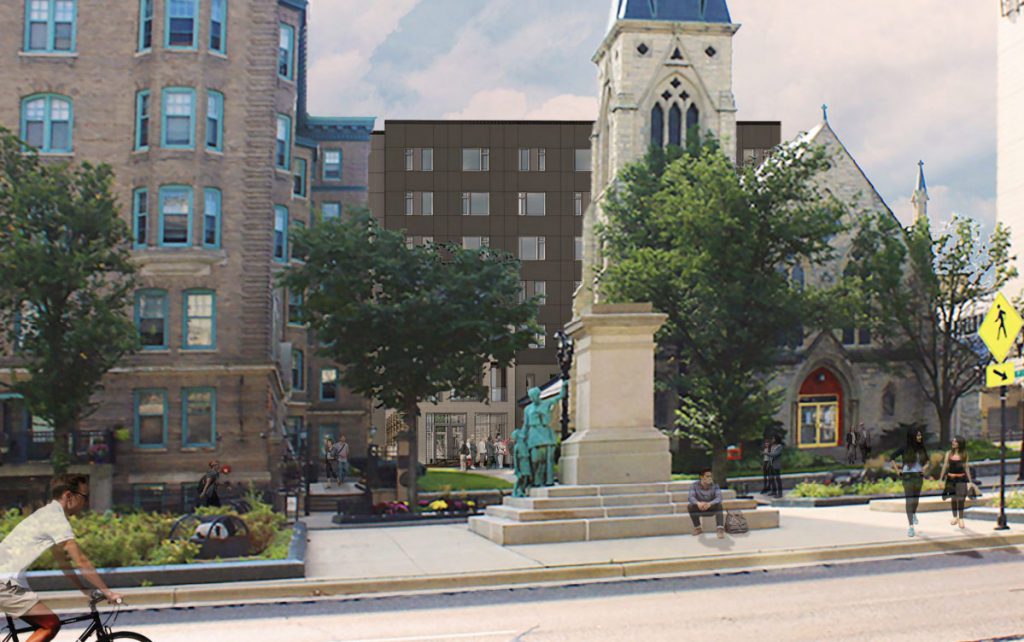 Developer Joshua Jeffers is proposing to build a seven-story, mixed-use building behind the historic St. James Episcopal Church at 833 W. Wisconsin Ave., while maintaining the recently abandoned church. Jeffers, in partnership with Oliver Hunt of Hidden Kitchen MKE, also plans to use the church as a venue for events. The new building would house apartments on its upper floors, while the first floor would include an additional event venue and venue support facilities.

The venerable protestant church, originally constructed in 1867, held its last service on November 1st, with the congregation folding at that time. It has been listed for sale for a number of years by the Episcopal Diocese of Milwaukee. With dwindling membership, the congregation could no longer afford the expense of maintaining the large facility.

An application filed with the city by J. Jeffers & Co. states “we intend to keep the original St. James Episcopal Church including the apse. This may require some maintenance or repair, but the current historic character will be retained and protected.”

The application notes the developer is proposing to demolish an 18,600-square-foot, rear addition to the church that was built in 1899. But the trusses from the old building would be reused to form the ceiling in a hall in the new building. The developer’s application cites significant challenges with making the old building compliant with the Americans with Disabilities Act as the driving factor in its planned removal.

The new building is being designed by Engberg Anderson Architects and will be attached to the rear of the historic church. A kitchen, welcome area and two-story tall great hall will be constructed in the new building and used as part of the St. James Event Center. The upper floors of the new building will contain apartments.

Documents filed with the city show that the new building’s upper floors would be clad in dark grey fiber cement panels, with the first two floors having exposed grey masonry.

Access to the new building would come from the courtyard on W. Wisconsin Ave. that separates the church from the adjacent St. James Apartments owned by John Hennessy. Hennessy recently restored the apartment building, which dates back to 1895.

The church has quite a history. The first church on the site was built atop the Spring Street Burial Grounds in 1851. After building a new church on the site in 1867, a fire gutted that building on New Years Eve in 1872. The church was restored and its basement still includes gravestones.

The proposal will next go before the Historic Preservation Commission. The church is a locally-designated historic structure and any alterations require a Certificate of Appropriateness.

The church will be the third building affiliated with Alexander Mitchell that Jeffers has recently restored. Just under a year ago the developer completed an extensive redevelopment of the Mackie Building and its large Grain Exchange room. The 25 apartments developed in the complex are now known as the Mackie Flats. Prior to the Mackie renovations, Jeffers restored the adjacent Mitchell Building.

Mitchell, a member of the St. James congregation, reportedly paid for one-third of the church’s construction cost. He would have had an incentive to make the church look as nice as possible, he lived across the street in a massive mansion that is today the Wisconsin Club.