How can unemployment be low when jobs growth is so low?

As the previous Data Wonk column discussed, Wisconsin job growth has been mediocre since Gov. Scott Walker took office. This conclusion is clear whether our job growth is compared to Walker’s promises or to the track record of other states.

A major promise that helped Walker win office was his pledge to create 250,000 new private sector jobs in his first term. Instead, Wisconsin private job growth has been 220,000 as of this September and, at the present rate, it is uncertain whether the governor’s promise will be fulfilled by the end of his second term.

Jobs have grown in Wisconsin, but at a rate that lags the average state in the U.S. As a result, Wisconsin’s share of U.S. jobs has been on a steady decline while he has been governor.

Understandably Walker and his advocates have recently turned to measures that put the Wisconsin economy in more favorable light. One is the unemployment rate. Here is a March press release from the Republican Governors Association:

The casual reader may come away with the impression that the unemployment rate was growing until Walker took over. In fact, for the previous year, the rate had been shrinking, from its peak recession high of 9.2%.

The more interesting question is what explains, and what are the implications of, Wisconsin’s recent low unemployment rate which hit a low of 3.1 percent in May and June before bouncing back to 3.5 percent in September. The chart below shows the unemployment rate for Wisconsin, Minnesota, 4 Great Lakes states (Illinois, Michigan, Indiana, and Ohio), and the U.S. 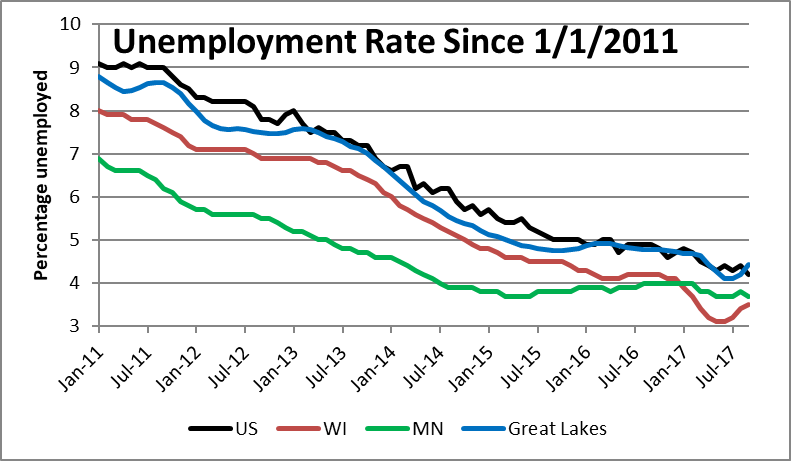 This chart creates a bit of a mystery. How could Minnesota, with greater job growth than Wisconsin, end up with a higher unemployment rate? For that matter, how could Wisconsin, with job growth since the recession that puts it below two thirds of the states in the nation, arrive at an unemployment rate well below the US as a whole? To examine this question, let’s start with how jobs and unemployment rate is calculated.

When the US Bureau of Labor Statistics publishes monthly employment data, the numbers come from two different surveys. The jobs numbers come from an “establishment survey” of approximately 147,000 businesses and government agencies.

But the unemployment numbers are calculated from a different survey, of households, done by the Census Bureau. People are asked whether they are working or looking for work. If they answer yes to either of these, they are counted as employed. If they answer no to the first question, and yes to the second they are counted among the unemployed. The labor force is the sum of the employed and unemployed. The unemployment rate is calculated by dividing the number unemployed by the labor force. 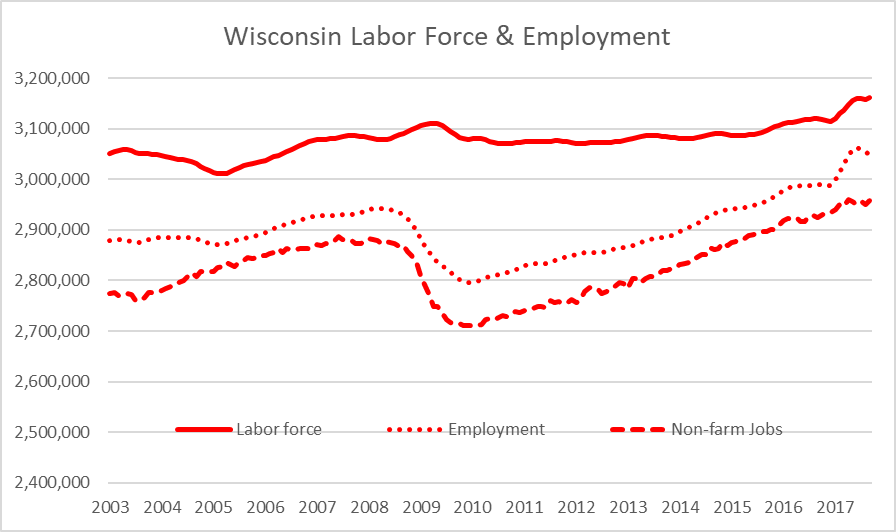 Even though the employment and the jobs estimates come from two different surveys, they track each other most of the time. An exception is the recent peak in employment (dotted line) as measured by the household survey while the establishment survey showed little growth in jobs.

This means that 75 percent of the households in one month’s survey are also in the following month’s survey. Also, half the households in a survey were also in the previous year’s survey for the same month. This approach smooths out the month-to-month variation. It also makes more likely that a change in employment from one month to the next reflects a real change and not sampling variation.

The downside is that a non-representative sample will affect the results over four months. This may be the explanation for the recent jump in reported employment—and the resulting drop in the unemployment rate. Once this group of households is gone from the survey, it is likely the unemployment rate for Wisconsin will return to some number closer to 4 percent as it is replaced by groups more representative of the population.

Something called the Non-Accelerating Inflation Rate of Unemployment (NAIRU) is used by the Congressional Budget Office and others as the lower limit on unemployment. As the name implies, it is an estimate of how low unemployment can fall without accelerating inflation.

The next chart shows the historical record of unemployment in the US, Wisconsin, and Minnesota. For comparison, NAIRU is also included. 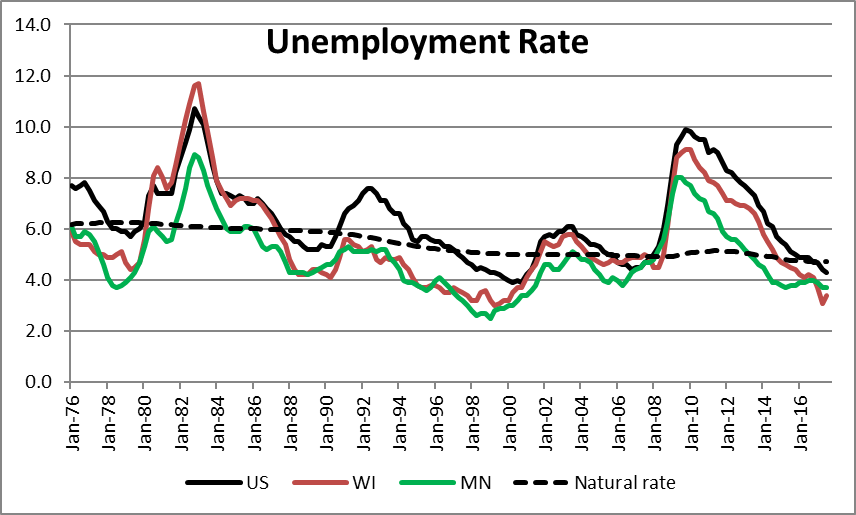 The question is how weak job growth can be consistent with a low unemployment rate. This gets to questions of how unemployment is calculated and what contributes to frictional unemployment.

Some frictional unemployment is voluntary. A person quits an unfulfilling job while searching for the right opportunity. That person is counted as both part of the work force and unemployed. Weak job growth may make people reluctant to give up even part-time employment until a new job is at hand.

Other groups are new workers, such as recent graduates and those reentering the workforce after stopping work to raise children, get married or care for elderly relatives, who now want to re-enter the workforce. If they move to another state because they perceive it as more favorable, Wisconsin’s unemployment rate will go down and the other state’s will rise.

As the next chart (based on IRS data, comparing 2014 returns to the same people in 2015) shows, Wisconsin is a net exporter of people. 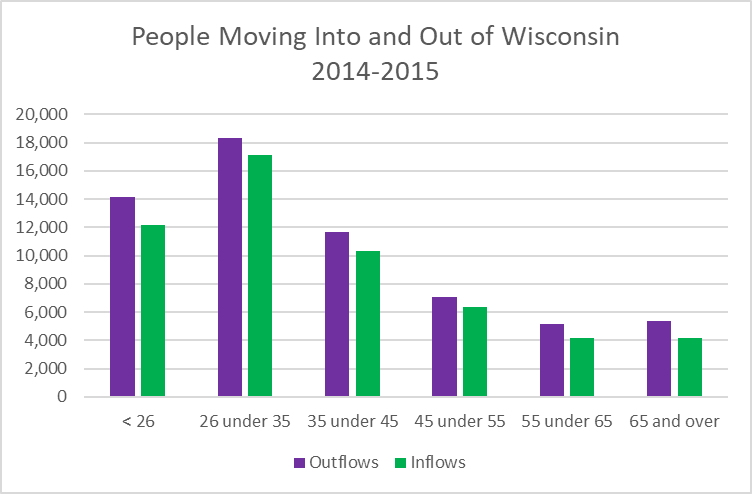 The next chart shows the average adjusted gross income for Wisconsinites who stayed put (in blue), those who moved within Wisconsin (brown), those moving to other states (yellow), and people from other states to Wisconsin (green). The solid lines are their 2014 income; the dotted lines are for 2015.

For younger people, there is not a lot of difference in income between those who move from the state and those who don’t. The differences get much starker with age. Those moving within Wisconsin fare worse, perhaps reflecting the effect of evictions or other moves forced by finances. The most prosperous middle-agers are those leaving Wisconsin. It would be useful, I think, to better understand the reasons for these moves. 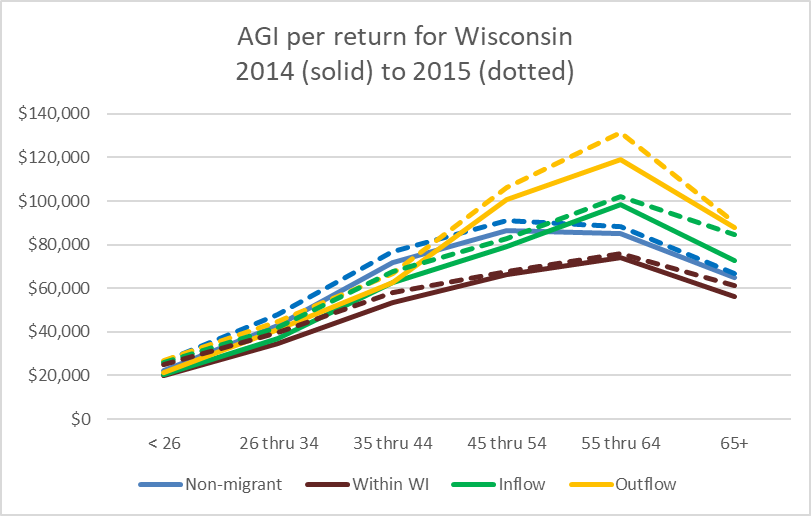 Another possible cause is structural unemployment, where workers’ skills do not match the needs of employers. The level of complaints from businesses that they are unable to expand in Wisconsin because of a lack of skills suggests that this is a factor. To the extent that these workers give up looking for a job, they are not counted among the unemployed.

Clearly, Wisconsin’s low unemployment rate does not stem from high job growth. Therefore, other causes need to be explored. Without further analysis, it is unknown whether those causes increase or decrease the well-being of Wisconsinites.