Is Wisconsin’s Economy “On Fire”?

Walker says so in new ad that slams Illinois. Is its claim true or false?

In a new political ad, Gov. Scott Walker tells Illinois residents that Wisconsin’s economy is “on fire.” He credits tax increases passed by Illinois’ legislature. The ad, however, is not Walker’s. It was paid for by Illinois’ Republican Gov. Bruce Rauner, as part of his reelection bid and reflects his ongoing feud with the Democratic legislature on how to cope with Illinois’ miserably underfunded public pension funds.

In the ad, Walker is joined by the Republican governors of Indiana and Missouri to thank the Illinois legislature for raising taxes. The result, they claim, was job growth in their states.

Is Walker right that Wisconsin economy is “on fire”? And to what extent is he responsible for the state of the Wisconsin economy? I should note in passing that the consensus among economists is that governors get too much credit when the economy is good and too much blame when it is bad one.

First, it should be obvious, but is often overlooked, that Wisconsin, like all states, is part of the United States. In assessing claims about the Wisconsin economy, one should be cautious about any argument that talks about Wisconsin’s progress while ignoring what was going on in the national economy. 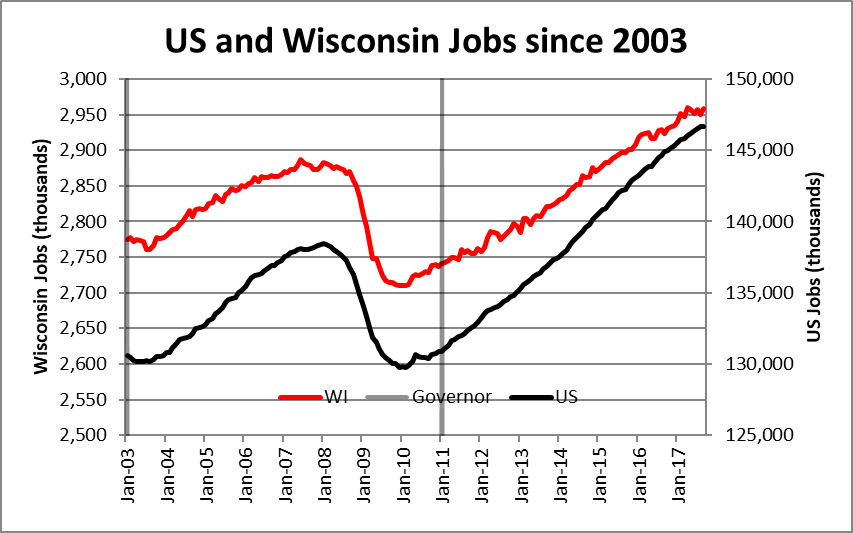 US and Wisconsin Jobs since 2003

The vertical lines on the graph mark when the state changed governors—in January 2003 when Jim Doyle took office and in January 2011 when Walker succeeded him. Throughout this entire, almost-15-year stretch, state employment mirrored national employment, climbing until the Great Recession hit in early 2008, dropping until the beginning of 2010, and then growing ever since. Wisconsin’s economy is very much a reflection of the national economy.

That said, a close observer will note that the two lines in the graph above are not parallel. The black US line is moving up faster than the red Wisconsin line. That is because Wisconsin’s share of the national employment has steadily dropped over the whole period, from 2.12 percent to 2.09 percent prior to Walker taking office, as the graph below shows, and then continuing to fall during the first six years and 9 months of the Walker administration, hitting 2.02 percent this September. 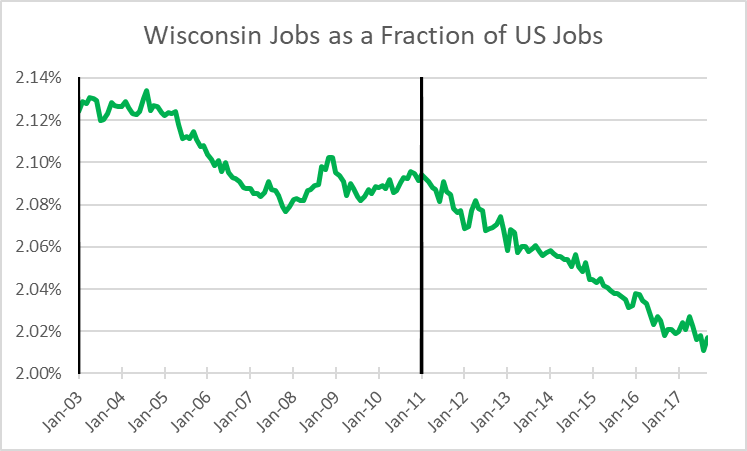 Wisconsin Jobs as a Fraction of US Jobs

The next chart compares the annual percentage change in US and Wisconsin jobs over this time period. As a generalization, Wisconsin falls behind when the nation is adding jobs because Wisconsin does not add them at the same rate. When the nation is shedding jobs, Wisconsin does better, relatively speaking. It should be noted that the time around 2005 was the height of the housing bubble, which was smaller in Wisconsin than nationwide. This may help explain the gap between the Wisconsin and US job gain in that period. 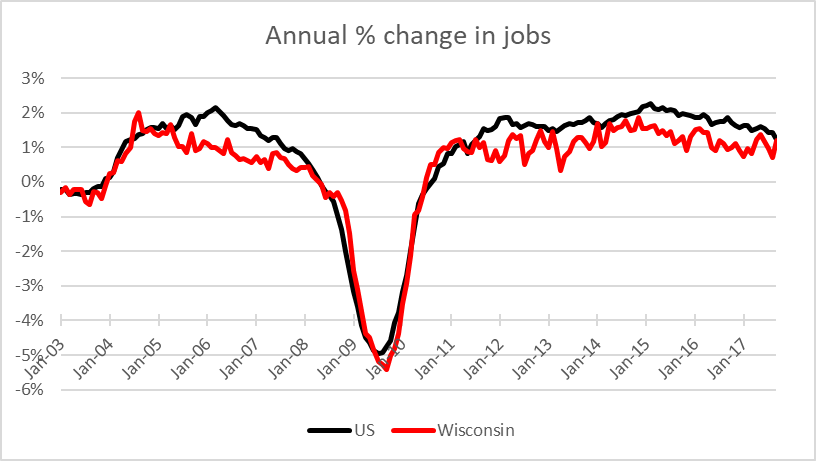 When all is said and done, the annual rate of falling behind national employment is three times as large under Walker as under Doyle. Thus, it can hardly be said that Wisconsin’s economy is “on-fire.” When judging against the national economy, the state has lagged behind.

This conclusion, however, doesn’t answer the question of causality. Did Walker’s policies cause the lag, reduce it, or have no effect? Answering this question requires that we know what would have happened to the economy with a different governor, an obvious impossibility. In a previous column, I speculated that the proverbial Martian, given all the financial data, would not be able to discern that there was a change in the governorship.

The best we can do is find comparable states and see how they did. Presumably they should be Midwestern and bordering on the Great Lakes, with economies historically a mix of manufacturing and agriculture. The trouble is that every state has its own story—one that can be used to explain why its job growth differs from Wisconsin. The starting point also makes a difference.

The next chart shows percentage growth from January 2011 in the US, Wisconsin, and the other Great Lakes states (combining jobs in Illinois, Indiana, Michigan, and Ohio). During this period, the US as a whole outpaced most midwestern states. But those four states, including Illinois, had greater employment growth than Wisconsin. 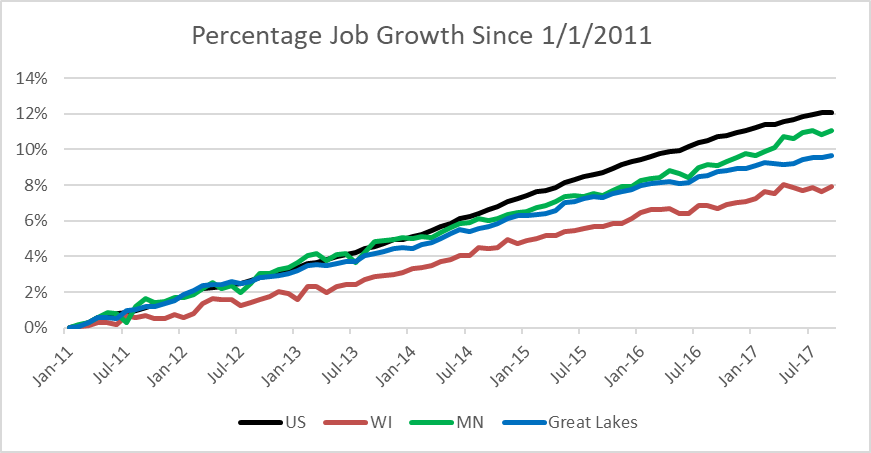 The chart after that shows Illinois compared to the other states it supposedly helped, according to Rauner’s ad. The state has probably been hampered by its huge public pension problem, but it nonetheless hasn’t performed much differently than Wisconsin in job growth. 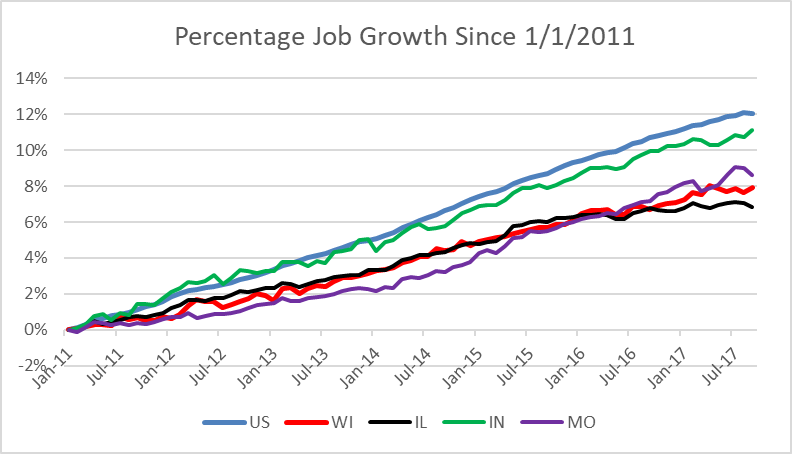 Because Minnesota and Wisconsin have about the same population, they can be directly compared. As can be seen below Minnesota historically had fewer jobs, 112,000 fewer when Doyle took office and 80,000 fewer when he left. Since then, the jobs gap has narrowed at a faster rate, such that today the two states are neck and neck in the number of jobs.

Again, one must be careful in assigning the job growth difference to sharply different state administrations. There are other factors that could have caused this difference, such as that Minnesota’s capital and major state university are both in its largest urban area, and differences in the business mix. 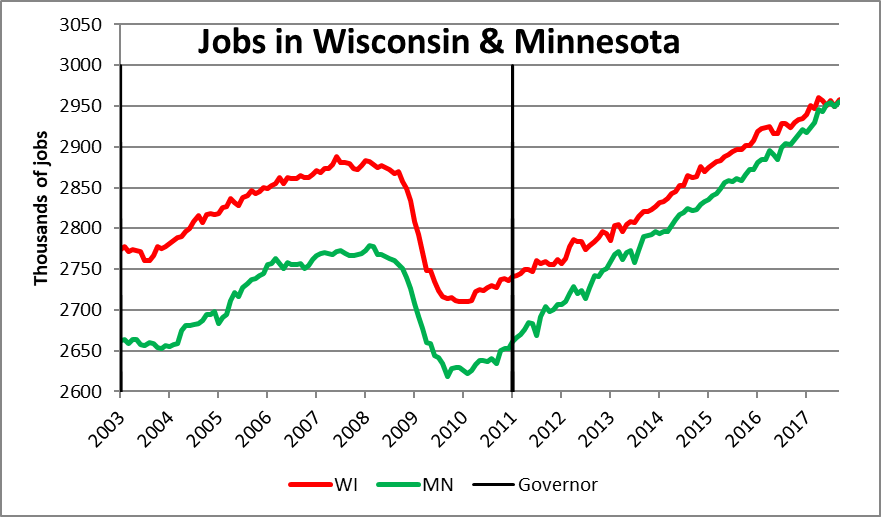 Since Wisconsin job growth is mediocre, Governor Walker and his advocates have recently turned to the Wisconsin unemployment rate, which hit a low of 3.1 percent in May and June before bouncing back to 3.5 percent in September. Not only is a low unemployment rate a good thing in itself, it is argued, but it helps explain low job growth: business has run out of employees.

This creates a bit of a mystery. How could Minnesota, for instance, with greater job growth than Wisconsin, end up with a higher unemployment rate? Next week’s column looks at this puzzle.

10 thoughts on “Data Wonk: Is Wisconsin’s Economy “On Fire”?”