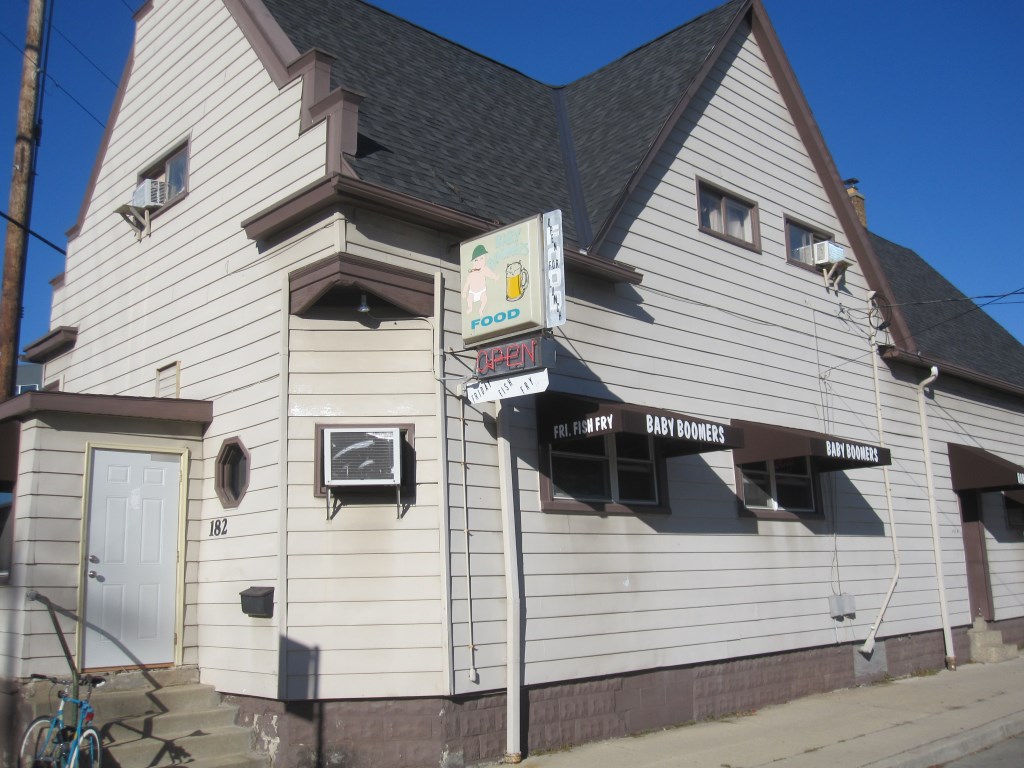 As has been noted in the past, odd shaped lots located near railroad tracks have proven to be quite suitable locations for taverns. In Riverwest alone, we have the Tracks, Circle A and Cafe Corazon. Now let’s venture south to a little triangular lot located across from the tracks in Bay View.

Since 2001 the bar here has been known as Baby Boomers, referring to a generation which, even then, was beginning to slow down a bit from its earlier partying ways. Even so, many boomers like to keep a buzz going, and some of them head to this place, perhaps drawn by the faded sign that shows a diapered child wearing an army helmet, and hoisting a sudsy brew while smoking a cigar. “Food,” reads a message on the projecting sign, followed below with further inducements including “Open for Lunch” and “Friday Fish Fry.”

The bar is located on E. Lincoln Ave., just west of busy S. Kinnickinnic Ave., yet it seems somewhat isolated, partly due to the fact that neighboring buildings are few. Lincoln Avenue is likewise a busy street, but this stretch is the vehicular equivalent of the flyover zone, where westbound automobiles pick up speed to head under the tracks toward the Kinnickinnic River, and the freeway beyond in what remains quite clearly an industrial area. To the south is Klement’s Sausage Co., an operating factory to this day. Yet to the north is a sight clearly unimagined when the Miller Brewing Company built this saloon in 1906: The Stitchweld, 288 high-end apartments, marketed to millenials with rents starting at $1,149 per month. You can see the giant complex right from the back door of the tavern, and from the neat fenced patio in the rear. And the future residents shall be able to see us, and we shall attract their attention and they shall join us.

All right, we better head over to Baby Boomers while it’s still a shot-and-a-beer kind of place, and before the sausage workers and our other Baby Boomer buddies get displaced by the newcomers in this generational and socioeconomic shift.

The building has four distinct facades, and we might as well ignore the north one, since it is just a 62-1/2 foot long blank wall with no windows (who wants to look outside at a Stitchweld anyway?) The east facade is 24 feet wide and of little interest, and the south facade, facing the street, is pocked with horizontal windows and a door to the apartment above. The west facade is the real treat, housing the central tavern entry door and an intricate German Renaissance gable, with a narrow horizontal window on the second floor. The north and south corners are cut out on the first floor. This storefront feature is charming and must have looked quite handsome before the siding was put on this place.

This front has a little bump-out and steps that lead to the street. An awning reading “Cocktails” is an inducement to entry. There is a little octagonal window that you can peer through when you get up the steps, just to see who’s inside. It could be somebody who you owe money to, affording you a chance to alter course. The interior is bright and white, thanks to fresh paint. The walls sport little in the way of decoration outside of posters dropped off by the salespeople for the beer, wine and liquor interests.

The U-shaped bar is 22 feet long, and is located along the north wall as you enter. It is eight feet from the wall to your stool, and the stuff behind the bar is the usual mix of bottles and oddities. The real interest in this room lies in the two pool tables, of good size and in immaculate condition. A bulletin board on the wall lists the schedule and standings for the league here. Next time, let’s check the list and see which other bars are in the league.

The northeast quadrant is a dining area that includes gambling machines — amusement devices, that is — and even a mirrored wall, to liberate the disco fever that still throbs within some Boomers’ hearts. Take a peek around the corner, and there is a 14-foot by 31-1/2-foot kitchen where it is said that one of the city’s best fish fries is made. This is a reasonable assertion, since the kitchen is equipped with bowls, and flour and things to mix. Your fish fry is not coming out of a box here, that’s for sure.

Your fellow customers are friendly, and woke up way before you did, even the retired ones. Good for them. Boomers has early hours, and some of the customers the day was no longer young on an early, sunny afternoon visit.

As mentioned, this place was built as a tied house for Miller Brewing Company. In the pre-Prohibition era, brewers like Miller would put up a “store and dwelling,” and lease it to an operator. Such was the case here, at what was then 210-Lincoln Ave., where building permit #3777 was issued on February 16th, 1906 for the construction of this $2,500 structure with 31,680 cubic feet of contents.

Wenzel Miksch was the carpenter for the building. In its original floorplan, the tavern occupied the west half of the first floor, while part of what is now the dining area was a 15’x10′ kitchen, serving both family and bar patrons. There was also a living room and two bedrooms, along with a toilet for the family’s use, as well as for the occasional female customer. The men’s bath was in the tavern itself, where it remains. The family bathed in an upstairs tub, which, along with four bedrooms, was arrayed around an unfinished attic space.

By 1919, as prohibition was about to descend upon the land, Joseph Tattay held the “license for the sale of vinous, spiritous, malt, ardent, or intoxicating liquors or drinks” for this place. A year later, all of those beverages were to be forbidden, and the place muddled through as a licensed Soft Drink Parlor, dispensing wholesome, hearty beverages, usually spiked with illegal alcohol.

As early as 1928 the building was in absentee landlord hands, with Julia Donath of 2803 N. 48th St. being the owner. She paid $700 to underpin the structure that year. Apparently not even Miller Brewing Company could put a decent foundation on a tavern in this town in the old days.

On July 18, 1934, with alcohol legal again, Joseph Hrovat took out a permit to occupy the place as a tavern, with “two males to be employed.” The former use of the space? “Tavern,” wrote Horvath. By 1949. the place was known as “Frank’s Tavern” and was run by a guy named Frank Fecteau. Frank hired Joe’s Refrigeration Sales & Service Co. of 1631 W. Center St. to install a new refrigerating system in the place, possibly as a side job.

The building inspector got wind of this, and sent an order to Joe on Halloween, 1949. “Procure permit for refrigerating system within 48 hours. Double Fee,” he ordered.

The breweries no longer operated taverns, but taverns sold their beers, and there was great demand to advertise their availability in the form of signs on walls and in windows throughout the city, especially on busy streets. In 1950 Frank installed two Pabst signs in the windows, along with a Schlitz sign. A one-car garage was built in 1951, and in 1953 Midland Improvement company charged $1,075 to install 5/8 inch insulated shake siding on the building, most likely covering up and altering a number of windows in the process.  Worse was yet to come.

By 1953 Henry Mavis rented the place, and he put up a Miller sign on the old Miller bar, and in 1955 the garage was expanded by 200 square feet to accommodate another car.

In 1956 Blatz got a sign on the building, composed of Lucite plastic, and lit by neon. The main frame, which apparently remains, was transferred from a tavern at 2701 W. North Ave.

By then the tavern, still owned by Fecteau, was operated by Joe Tarantino, and called “Tarantino’s.” Joe installed a Miller High Life sign. In 1958 Wally Witt was the tavern tenant here, and he did his share of signage, with a Hamm’s and a Schlitz sign. In 1959, a Blatz sign announced that this place was called “The Bright Spot.” And perhaps, compared to the surrounding gritty neighborhood, it was.

By 1962, the Bright Spot and its building were owned by Bruno Gruszecki (1910-1972). He exercised the usual operator prerogative of installing some signs on the place, in this instance, Schlitz and Pabst. In 1964 the bar was run by Helen Kapke. Two years later Joseph Spinnato was the tenant, with Gruszecki living upstairs collecting the rent.

In 1968 Leroy C. Santi operated the place, failing to legally procure an occupancy permit from the city to do so. Once that was remedied, he installed an Old Style sign at the bar, which was still called the Bright Spot. He put up another Pabst sign just for good measure.

In 1971 Gordon R. Harvey took a stab at running the place, renting from Bill Gruszecki. The name was modified to “Tom and Terry’s Bright Spot.” To celebrate, the operator installed a Blatz sign to that effect.

Up to this time the floorplan had been little changed since the building was constructed over 60 years previously. But on April 18th, 1973, Gruszecki shelled out $1,000 to “Remove non-bearing partitions to extend dining area and relocate kitchen,” giving the interior the form it bears today, with a load-bearing wall dividing kitchen from dining area. A year later the Pabst sign that was on the side of the building was moved to the Lincoln Ave. facade, and a Blatz sign was removed.

In 1976 the building and business changed hands, with Ralph Wycklandt of N. Holton St. being the new owner. He called the place “Ralph’s” and spent $1,495 on an air conditioner and a new gas furnace. That year he spent another $2,000 installing the horrible aluminum siding that remains today and is begging to be torn off now that Bay View is gentrifying. The building got an Old Style sign. Nancy Wycklendt ran the place by 1986, when she installed a fire suppression system for the hood in the kitchen. Nancy remained the owner operator until 2000 when Mark Wycklandt applied. An inspection found a loose men’s room toilet bowl. By November, 2001 Wendell Bennett, the current owner, received his certificate of occupancy, and Baby Boomers was born. 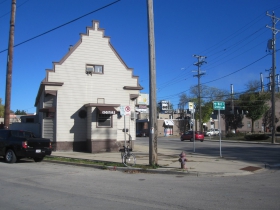 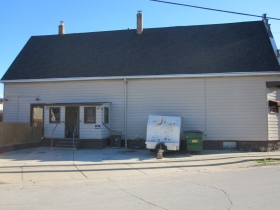 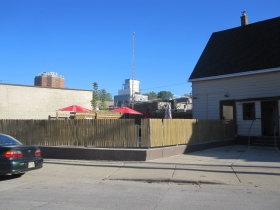 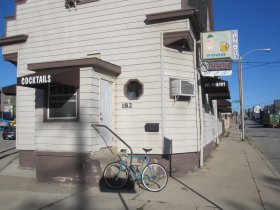 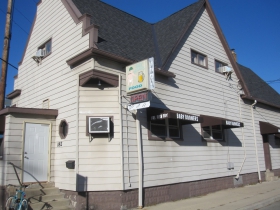 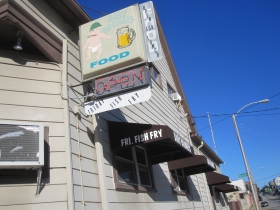