By Carrie Levine, Wisconsin Center for Investigative Journalism - Oct 26th, 2017 02:09 pm
Get a daily rundown of the top stories on Urban Milwaukee 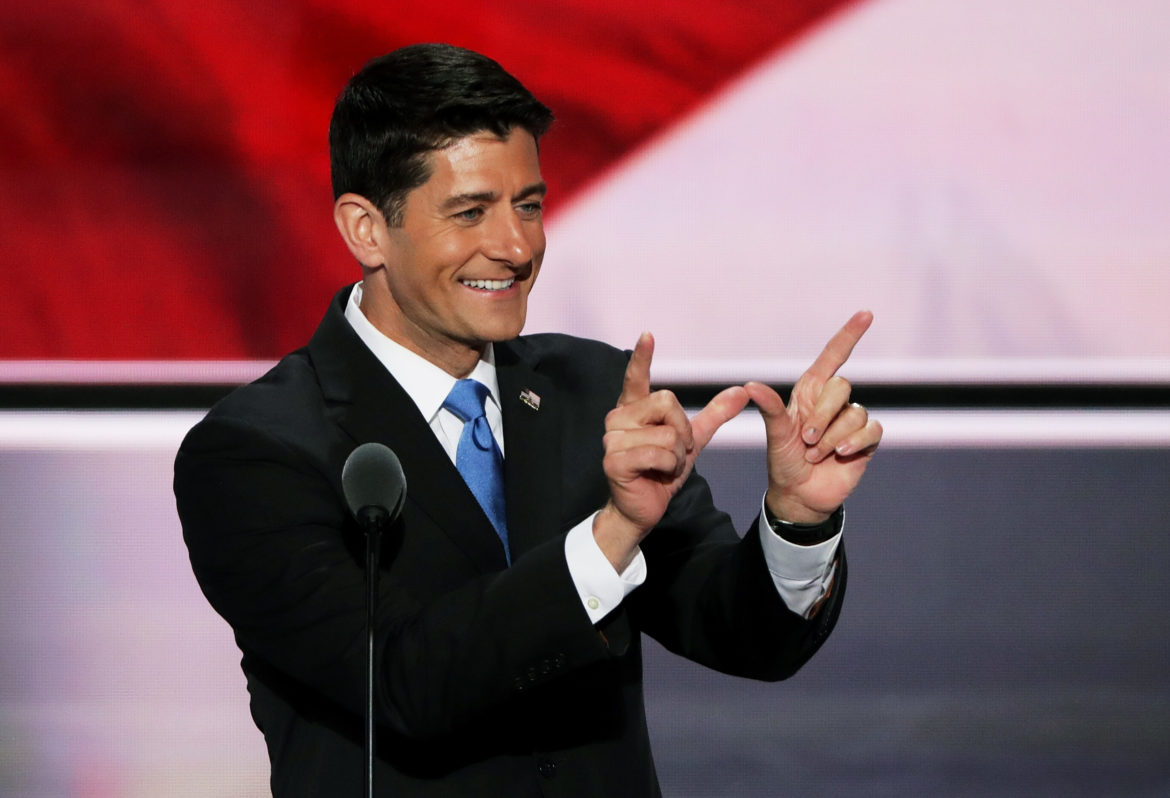 U.S. House Speaker Paul Ryan of Wisconsin gives the “W” hand sign at the Republican National Convention on July 19, 2016. Several major corporations and trade groups secretly bankrolled a hideaway for lawmakers at the convention for use by Republican lawmakers, including Ryan, records show. Photo by Alex Wong/Getty Images.

Donald Trump declared last year in his populist presidential nomination acceptance speech that he is “not able to look the other way” when the nation’s political system “has sold out to some corporate lobbyist for cash.”

But behind the scenes, several major corporations and trade groups secretly bankrolled a plush hideaway for lawmakers at the same Republican National Convention in Cleveland where Trump gave the speech, records obtained by the Center for Public Integrity show.

The so-called cloakroom was constructed on the Cleveland Cavaliers’ practice court inside the Quicken Loans Arena. It was described by the designers as “a memorable space, in an expansive room, for our nation’s patricians.” Photos of the transformed space show wooden beams, pendant lighting and areas featuring comfortable seating, pub-style tables and chairs, flat-screen TVs mounted on the wall and other amenities. 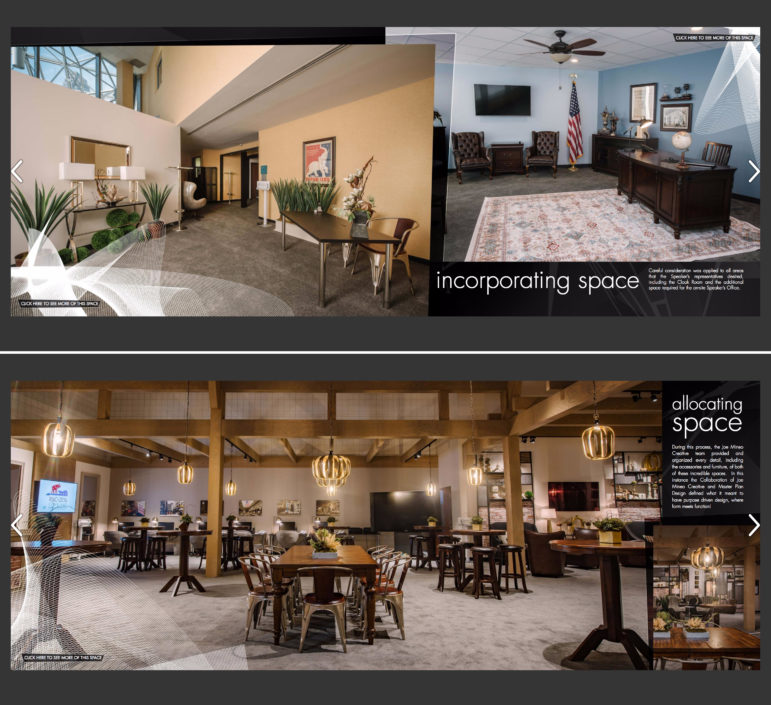 “Careful consideration was applied to all areas that the Speaker’s representatives desired, including the Cloak Room and the additional space required for the on-site Speaker’s Office,” according to the marketing materials posted online by contractors who worked on the “cloakroom” space. But a spokesman for Ryan’s congressional committee said that is not accurate and Ryan’s office did not supervise construction or make decisions about the design of the cloakroom. Photo from the Republican National Convention Design and Development Profile / Joe Mineo Creative and Master Plan Design.

Company contributions to Friends of the House 2016.

That company in turn paid for the design and outfitting of the cloakroom, an exclusive office, lounge and gathering space for Republican lawmakers including House Speaker Paul Ryan of Wisconsin.

The limited liability company effectively hid the corporations’ contributions from public view at a time when anti-Trump activist groups were pressuring companies to scale back giving to the Republican convention, and a few of the companies had publicly minimized their participation.

“The immediate effect is it looks like it hid certain donors to the convention,” said Lawrence Noble, senior director and general counsel for the Campaign Legal Center, a nonpartisan nonprofit that advocates for campaign finance reform.

One company that helped pay for the cloakroom confirmed its contribution bought it entry to the space.

“As a sponsor of the hospitality venue, we were invited to use it, as well,” said Jori Fine, a spokeswoman for Health Care Service Corp. The company paid Friends of the House 2016 LLC $100,000, according to bank records.

The Center for Public Integrity obtained the bank records from a lawsuit filed in Cuyahoga County Court of Common Pleas in Ohio. To confirm the payments shown in the bank records and to determine the purpose of them, the Center for Public Integrity attempted to reach representatives of the 20 corporations and trade associations named in the records. Of the 20 companies, 15 either declined to comment or did not respond to questions.

Except for Health Care Service Corp., the companies that responded did not offer specific responses about the purpose of the payments to Friends of the House 2016 LLC or detail what they expected to receive in exchange for the payment.

“This type of secure space for dignitaries has been provided at most recent conventions but is not under the control of the Host Committee,” Lauer said in an email. She directed questions about the use of the space, and who had access to it, to Friends of the House 2016 LLC.

But Jeffrey Livingston of Friends of the House 2016 LLC did not respond to multiple inquiries from the Center for Public Integrity.

Livingston, a political fundraising consultant whose clients include Ryan, was Friends of the House 2016 LLC’s registered agent, according to Virginia corporate records. A court filing by Livingston’s lawyer said that Friends of the House 2016 LLC was “established to manage and raise funds for hospitality activities and events during the 2016 Republican National Convention.”

Kevin Seifert, a spokesman for Ryan’s congressional campaign committee, said the description was not accurate and that Ryan’s office “was not involved in supervising construction or consulted about the design of the cloakroom.”

Friends of the House 2016 LLC was not created on Ryan’s behalf, and Ryan did not raise money for it, Seifert said. He did not respond to a request to confirm Ryan had access to and used the cloakroom.

Corporate donors last year faced pressure from activists to scale back their giving to the political conventions, especially the Republican convention.

But national political conventions are legendary opportunities for access to lawmakers, despite ethics reforms Congress passed in the wake of influence peddling scandals. Complex rules govern even the details of events, such as food menus, but often turn on technical points, forcing lawyers to double-check legal advice every four years. 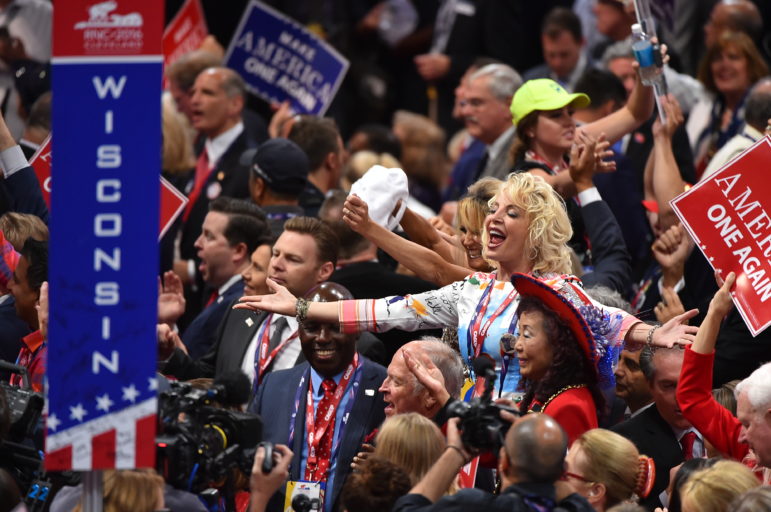 Delegates celebrate on the last day of the 2016 Republican National Convention on July 21, 2016. The Center for Public Integrity has learned that nearly $1 million in previously unreported corporate donations were used to construct a “cloakroom” at the Quicken Loans Arena in Cleveland, Ohio. Photo by Ricky Carioti / The Washington Post via Getty Images.

For example, although individual congressional members can’t be honored by special interests, certain delegations of lawmakers can be — and frequently are. The rules for U.S. House members and U.S. senators aren’t identical. And companies have many routes to court those in power, like sponsoring delegations or events that raise money for charity.

“The convention is one big loophole to the limits of corrupting money on politics,” said Paul S. Ryan, vice president for policy and litigation at Common Cause, a nonpartisan nonprofit that advocates for limits on money in politics. He is not related to the House speaker.

Friends of the House 2016 LLC appears to have provided companies an especially discreet opportunity to support the GOP convention.

For several of the companies that did not otherwise donate cash directly to the Cleveland 2016 Host Committee — a list that includes 12 of the entities listed in the bank records — there was little or no public evidence of their use of corporate dollars to support of the 2016 Republican convention.

Neither is Koch Companies Public Sector, which wrote a $100,000 check to Friends of the House 2016 LLC. In fact, a Koch Industries spokesman in June said the billionaire brothers Charles and David Koch, well-known Republican megadonors, were not planning to contribute to the convention at all.

Neither firm responded to a request for comment about the payments to Friends of the House 2016 LLC.

Microsoft gave a $1.8 million in-kind contribution of software to the Cleveland 2016 Host Committee, records show, but no cash. 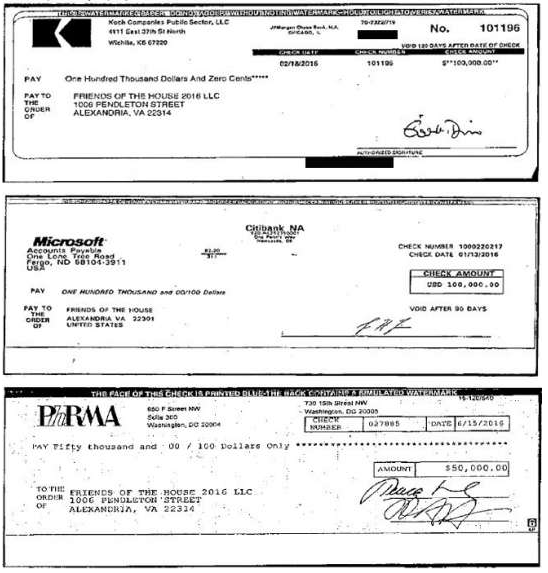 Copies of checks written to Friends of the House 2016. Photo from filings with the Cuyahoga County Court of Common Pleas.

Microsoft explained its decision in an April 2016 blog post by Fred Humphries, corporate vice president of U.S. government affairs for Microsoft. Humphries wrote: “We decided last fall to provide a variety of Microsoft technology products and services instead of making a cash donation” to the Cleveland 2016 Host Committee. Microsoft did contribute cash to the Democratic convention’s host committee.

In response to questions, Microsoft sent a statement through a spokeswoman saying, “We were unaware of any payments made by Friends of the House LLC to the convention committees.”

Other entities contributing to Friends of the House 2016 LLC, such as the American Petroleum Institute, Anthem Inc. and AT&T, also made separate contributions directly to the Cleveland 2016 Host Committee that appeared in public disclosure filings. Those companies did not respond to requests for comment.

In response to questions about its $100,000 payment to Friends of the House 2016 LLC, Melissa Ritchie, a Chevron spokeswoman, said, “We are committed to supporting policies and candidates that promote an economic environment where business can thrive. We follow policies and processes so that our political contributions comply with applicable laws.”

Ritchie did not respond to questions about what specific policy or candidate Chevron was supporting by making the contribution to Friends of the House 2016 LLC.

‘Not seeing who really gave the money’

During Friends of the House 2016 LLC’s life — it materialized in August 2015 and shut down in December 2016 —  it made four direct contributions to the Cleveland 2016 Host Committee. Much of the $923,100 was used to pay contractors that helped create the cloakroom. 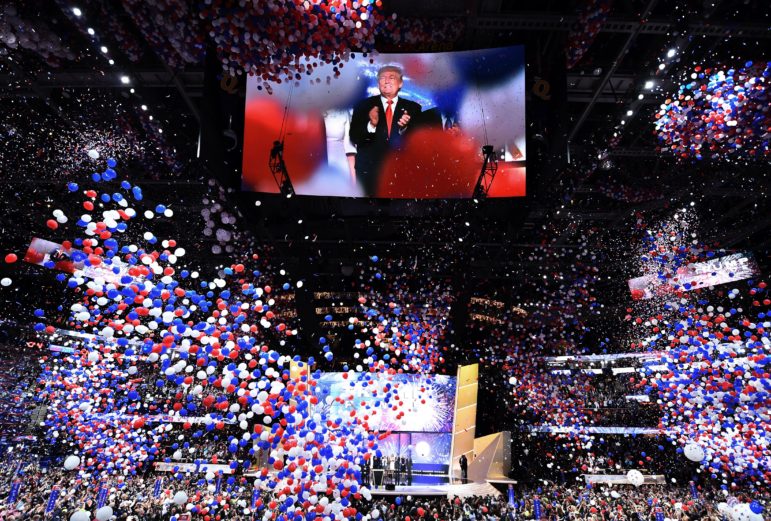 Then-presidential candidate Donald Trump is seen onscreen at the closing of the Republican National Convention at the Quicken Loans Arena in Cleveland, Ohio, on July 21, 2016. Trump told delegates that the nation’s political system “has sold out to some corporate lobbyist for cash.” The Center for Public Integrity has learned that corporations quietly funded a posh meeting and office space at the convention. Photo by Jim Watson / AFP/Getty Images.

The Cleveland 2016 Host Committee disclosed the four contributions from Friends of the House 2016 LLC on required public disclosure reports showing contributions and expenditures.

But the disclosures, which gave almost no hint of the corporate money underlying the contributions, were opaque.

Democrats, meanwhile, also had a cloakroom space with food and drink for elected officials at their convention, where they nominated former Secretary of State Hillary Clinton. But “we did not have a separate LLC or separate fund” raising contributions earmarked for the cloakroom, said Anna Adams-Sarthou, a spokeswoman for the Philadelphia 2016 Host Committee.

Lauer said the Cleveland 2016 Host Committee has complied with all reporting and disclosure requirements.

Noble, of the Campaign Legal Center, said it is difficult to know exactly how the money was solicited or who knew the original source of it, but “the effect is that you’re not seeing who really gave the money for this.”