20% to 28% decline in kids projected for some northern and central counties.

By Tamarine Cornelius, Wisconsin Budget Project - Oct 20th, 2017 12:28 pm
Get a daily rundown of the top stories on Urban Milwaukee

In some areas of northern and central Wisconsin, the number of children is expected to decline by up to a quarter over the next 25 years, presenting a host of challenges to communities that are already struggling to stay economically vibrant. Communities in rural areas with declining numbers of children often have difficulty providing enough resources for their school districts, which often have substantial fixed costs and must shoulder the costs of transporting students across a large geographic area.

Overall, the number of children in Wisconsin is projected to grow modestly over the next several decades, but the growth will be concentrated in a few already-populous areas of the state including southern Wisconsin, the Fox Valley, and the suburban communities around Minneapolis-St. Paul.

The number of children in Wisconsin is expected to grow by 87,000 between 2015 and 2040, a 5.9% increase, according to projections made by the state’s Department of Administration. The counties that are projected to add the most children are:

In percentage terms, the counties with the largest child growth are expected to be:

The counties with the largest declines in the child population are:

The rural counties of northern and central Wisconsin have the largest declines in the number of children in percentage terms. These counties are already sparsely populated, so while the actual number of children the counties are expected to lose is in many cases fairly small, it represents a large share of the county’s child population. The counties with the largest losses in percentage terms are: 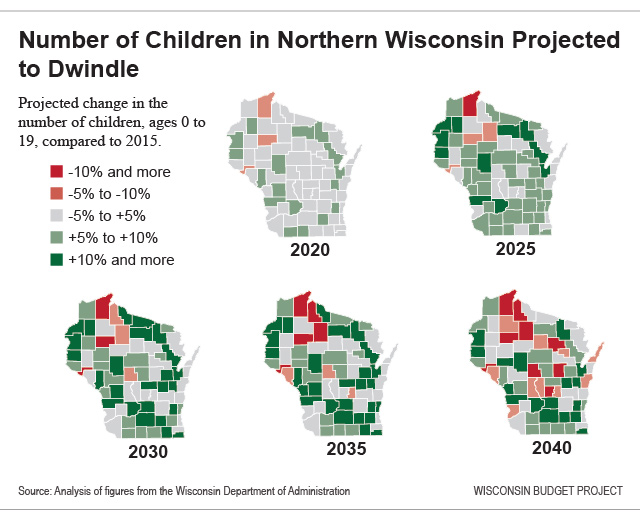 Number of Children in Northern Wisconsin Projected to Dwindle

These projected declines in the child population in northern and central Wisconsin counties would be severe enough on their own, but they come on top of significant declines that have already occurred. Between 2010 and 2015, many rural counties saw double-digit declines in the number of children living there. For example, the number of children living in Bayfield County dropped by 13% between 2010 and 2015 alone. (For more information, read Where are the Kids? Northern Wisconsin Experiences a Significant Decline in the Number of Children, October 2016.)

The problem is that some school district costs are fixed and don’t go down when student enrollment (and the allowable revenue) goes down. For example, school districts face the same heating bill regardless of how many students occupy a building. Likewise, a school district may have to run the same bus routes, have the same costs for insuring its buildings, and pay the same amount to have its parking lot plowed regardless of the number of students inside the building.

School districts with declining enrollment may consider consolidating with a bordering school district, but that’s no cure-all: transportation costs and bus ride times for students may increase after consolidation. And closing a school can be a devastating blow for a small community.

State lawmakers missed some opportunities in the budget process to give additional help to communities and school districts faced with declining numbers of children. Governor Walker proposed setting aside an additional $20 million in the budget targeted at rural school districts, but the legislature’s budget committee removed most of that amount. The budget committee put in additional resources for school districts that share grades or services, which are typically districts in rural areas – but the Governor vetoed that provision. The Governor and legislature did agree on adding about $10 million in the budget for districts with above-average transportation costs, which are typically rural districts that have to bus their students from across a wide geographic area. Two Republican lawmakers have since introduced a bill that would boost funding for rural schools by the same amount that Governor Walker had proposed in the budget.

The declining number of children in Wisconsin’s northern, rural areas is a sign of a larger problem: These communities are not able to offer residents the same economic opportunities that are available in other parts of Wisconsin. To solve this problem, state policymakers should make the investments necessary to ensure that residents – regardless of where they live in the state – have access to excellent schools, jobs that pay family-supporting wages, and safe communities. We should make it a priority to ensure that northern and rural Wisconsin gets what it needs to thrive.