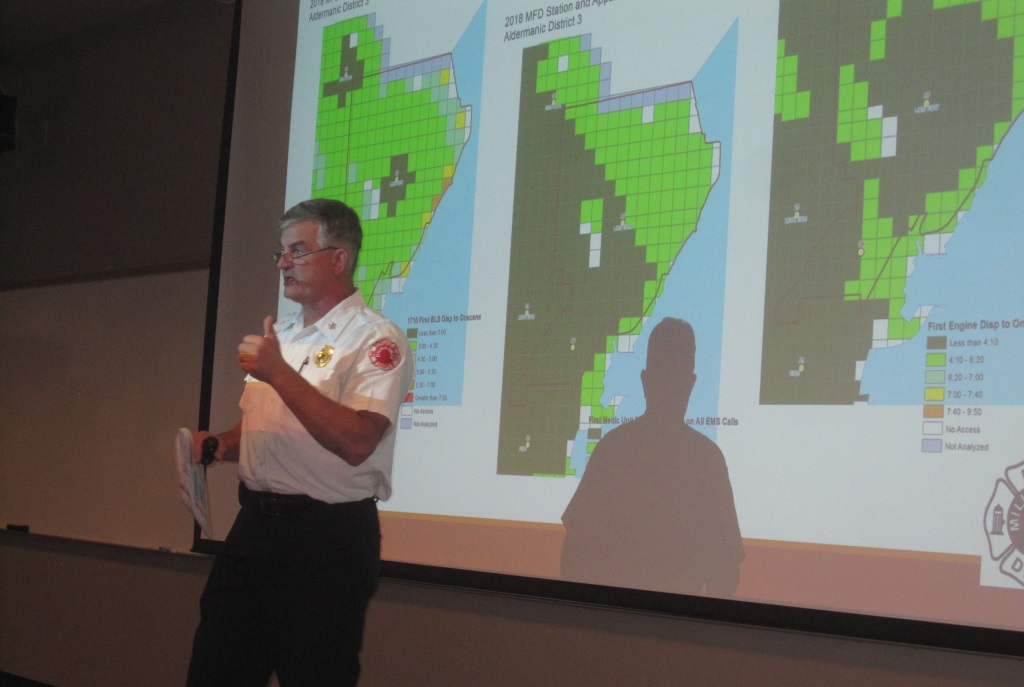 The firefighter is the most dashing and brave of civil servants, with a chosen profession rich in romance and legend. Young children dream of becoming one some day — in fact, for some families the job is every bit as hereditary as a Dukedom, with service stretching back generations. As a municipal building, the aptly named “Fire House” is unique in that it includes such domestic arrangements as sleeping quarters and a kitchen for those therein employed.

No Milwaukee fire house is more beloved than Engine Co. 6, which has served the Brady Street neighborhood since 1875 from its site at 1693 N. Franklin Pl., at the southwest corner of the commercial street that gives the neighborhood its name.

The fire house, constructed in 1946, is built right up to E. Brady St., and passersby can catch a whiff of the home cooking that emanates from the kitchen. The aromas rival those of the many restaurants on the well-fed street.

The house is the site of an annual Chili Social, held in February to benefit the Brady Street Area Association. A retired station captain, who needed to cross only one street to get home, became so enamored of the area that he wrote a book about it.

The area the station serves is the most densely populated in the state, as well as among its fastest growing. It has a high concentration of aged housing stock, of largely detached frame construction, and a considerable population of the elderly housed in the both public and private senior living facilities. The area has most of the tallest residential buildings in the state, and a challenging geography that deviates from the Milwaukee grid, as well as including precipitous elevation changes of 100 feet or more at the bluffs. It also has its share of transients, homeless, the mentally ill and drinkers on a bender, all public safety concerns.

Yet when Fire Chief Mark Rohlfing tasked his Firefighting Deputy Chiefs to identify savings to accommodate the Mayor’s proposed budget cuts, the analysis by Deccan software and the experience of his deputies identified Engine 6 as the prime spot to close. The reaction in the community was a widespread sense that the residents and businesses would rather the station remain open.

Earlier this week, Bruce Murphy discussed the dynamics at play for modern fire departments, where the number of fires has declined, yet the number of career professionals employed to fight them has increased. A more recent fiscal accelerant to the red-hot budget issue is the loss of state shared revenue and the growth in employer pension contributions the city is obliged to make. 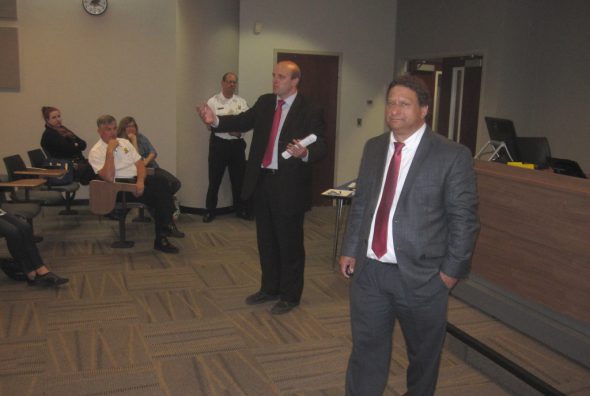 On Wednesday, Ald. Nik Kovac invited officials to discuss the changes that he and other council members will vote on during budget adoption meetings early next month.

The session, which drew over 135 neighbors, including active and retired fire fighters and their families, was held at UW-Milwaukee’s Lubar School of Business Administration in the Michael J. Cudahy Lecture Hall.

Kovac was joined by Rolfing and Dennis Yaccarino, the city’s budget and management director, who had been appointed to his position only last month, after years of serving as an economist and as city financial operations manager. For such a newcomer to the job, explaining the city’s budget structural issues before this audience was a veritable trial by fire.

Yaccarino said the city faces some structural issues that must lead to either new revenue sources or further budget cuts in coming years.

This leaves a $28 million gap between expenditures and revenues.

Furthermore, Yaccarino was obliged to tell the recipients, despite legislation and news reports to the contrary, the capital and operations budget of The Hop, the Milwaukee Streetcar, has no impact on these figures.

According to Yaccarino, the ideal solution would be for the state to restore equitable shared revenue funding to the City of Milwaukee, explaining that reversing the $104 million annual real dollar decline since 2003 would solve many problems, and restore integrity to the city’s financial structure.

Ald. Kovac mentioned the century-old tradition of having the state levy an income tax which would then be remitted to municipalities according to a formula, which has since been abrogated, costing Milwaukee hundreds of millions of dollars, he said.

Yaccarino said an alternative solution would be to have the city enact a 0.5 percent sales tax dedicated to public safety, thus removing some volatility from the funding source. 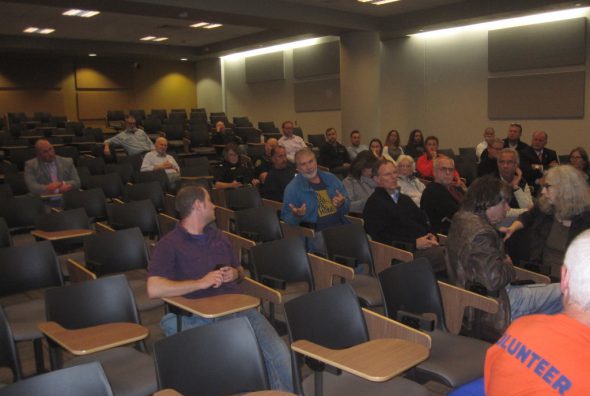 Chief Rohfling defended his decision to close Engine 6 and to repurpose it as a Public Education center. He recalled a time when calculations of station openings and closings were made by stopwatch as trucks tested different routes and travel conditions. Now they are dictated by GPS and computer algorithms such as the Daccan system that helped plot the demise of Engine 6.

“Engine Six is the face of the fire department in the city,” one attendee said, addressing the panel, as murmurs of assent filled the room.

Frank Alioto, the retired Engine 6 Captain who wrote the history of the Brady Street neighborhood, faulted the Daccan computer study, finding it “skews too much on geography rather than the reality of what is there,” a sentiment that also appeared to be widely shared by audience members, who noted the great number of elderly, the many businesses in the area, its growth and density and such omnipresent potential hazards as a river with a reversible current, and the 1,197 cubic miles of fresh lake water, both located just a couple of blocks from the beloved engine house.

“Whether or not we lose this battle, it is important to lobby on the state level for local control,” Alioto concluded.

Another attendee objected to the plan to repurpose the station as an Public Education center, saying “it sounds like we are being thrown a bone,” in lieu of shuttering the building on its prominent corner. Another called it an “insult.”

This appeared to take the fire chief by surprise.

Brady Street would be a good location for the public education facility, which is now buried in the remote Teutonia facility, he said: “Not to insult anybody, but this would be a great use for the building.”

“It seems contrived to me to keep it as a (Public Education) house,” one said. “Put it on the tax rolls. Find another use for it.”

The suggestion, somewhat surprisingly, resulted in cheers and applause.