Sherwin Williams paint store with ho-hum design will be plunked next to Cermak Market.

The second phase of the Freshwater Plaza complex is poised to get underway. A Sherwin Williams paint store will soon join the Cermak Fresh Market grocery store and Freshwater Plaza apartment building at the northeast corner of S. 1st St. and E. Greenfield Ave.

The store, which will target contractors, is expected to be Sherwin Williams’ highest grossing store in Wisconsin according to Michael Cockroft of Wangard Partners. Wangard is developing the 3,614-square-foot store for the paint giant. The company previously had a paint store just a few blocks north at 515 S. 1st St.

According to Cockroft, the 26,076 square-foot site was most recently a gas station. Much of the Freshwater Plaza complex was previously covered by a large foundry complex.

A new 9-foot tall “monument sign” advertising the entire complex will be installed along S. 1st St. as part of the development.

The building at 1278 S. 1st St. won’t win any design awards. It’s a slight cut above the standard suburban store, but still includes a single-use, largely fenced-in parking lot. Further compounding this, it backs up to the surface parking for the Cermak Fresh Market grocery store. Once the second suburban-style outlot building is complete, it will also connect with the surface parking lot to the north of the Freshwater Plaza Apartment building.

Given its suburban design on a heavily traveled corridor, the comments from Zoning, Neighborhoods & Development Committee chair Jim Bohl after the design was presented to the committee seemed a bit out of step. Said Bohl: “This I think is one of the next hot spots of development. It’s located between Downtown, the Third Ward and the continued booming area of Bay View.”

Bohl is certainly correct that this is a hot spot for development (see my article: Walker’s Point Boomtown), but not for a development like this, which would never be approved on a main street in any of the three neighborhoods he mentioned. Surely S. 1st St., which connects the Historic Third Ward‘s N. Water St. to Bay View’s S. Kinnickinnic Ave. should be held to the same standard.

Kudos to Wangard Partners for continuing to land commercial tenants at a rate faster than any other multi-family developer in town, but it’s a shame they can’t all be in buildings like the firm’s Freshwater Plaza or Avenir apartments.

In a follow-up email, Cockroft notes “All primary design characteristics of the Sherwin Williams project were dictated by the requirements of the Freshwater site GPD (General Planned Development) that was created jointly by Wangard and city planners and then approved by the City of Milwaukee Common Council. The design guidelines of the GPD were mostly driven by the City of Milwaukee zoning requirements and the City of Milwaukee Design Review Team. These elements include but are not limited to determining: master site design, exterior materials (brick, metal panel, concrete with minimal stucco/EIFS), building height, building frontage, clear glazing requirements, taller element at the building corner, articulated bays/piers, setbacks, parking, landscaping, parking lot screening requirements, et cetera – all of which the proposed design is compliant with.” 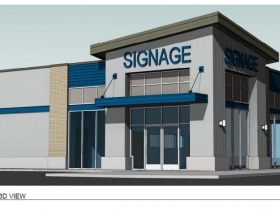 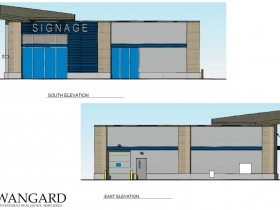 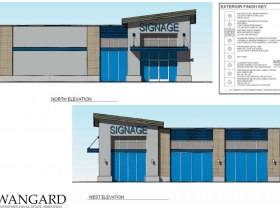 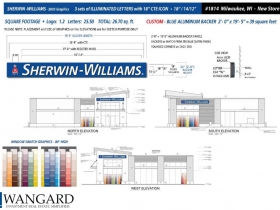 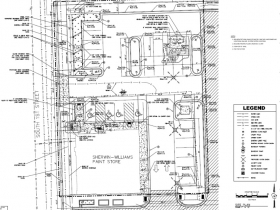 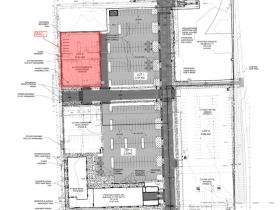 12 thoughts on “Eyes on Milwaukee: Suburban-Style Store for Walker’s Point”