Milwaukee’s first vertical lift span, the 1966-era St. Paul Ave. bridge, is scheduled to close on September 3rd for rehabilitation. It will remain closed to traffic until June 2014. The river will remain open for navigation at the bridge, and the riverwalk that runs beneath it on the east shore of the Milwaukee River will be open for pedestrian traffic during construction.

Not mentioned is that the bridge will be the first one in over a half century to include streetcar tracks as part of its design. That is because the proposed route for the Milwaukee Streetcar, which commences construction in Spring 2014, crosses the river using the St. Paul bridge. The streetcar is expected to be in operation in Spring 2016.

Construction of the bridge will overlap with the reconstruction of the 1970s absurdist icon, the Hoan Bridge, the 120-foot vertical clearance of which requires the use of acres of downtown land to support its elevated ramps and auxiliary roadways.

The St. Paul Avenue bridge work will commence just after the last Harley-Davidson leaves town after the local firm’s 110th Anniversary Celebration, August 29th – September 1st, 2013. By that time, the Pleasant Street Bridge, which has been closed since September, 2012, should be open to traffic.

These are just two of the many bridges rebuilt or rehabilitated during the mayoralty of Tom Barrett. Other bridges include the Highland Boulevard Viaduct, the Kilbourn Bridge, the McKinley Bridge, the Juneau Bridge, the State Street Bridge and the Wisconsin Avenue Bridge.

All of this bridgework has brought new duties for Cecilia Gilbert, the City of Milwaukee Department of Public Works Support for Business Liaison. Ever since the Wisconsin Avenue bridge reconstruction in 2011-2012, she has been responsible for seeing that the building of bridges and streets does not cause the ruin of nearby businesses. Her work includes street-level activism in the form of directional signs and detour routes, media contacts, frequent updates on the DPW website as well as such quaint old-timey things such as posting notes in elevator corridors announcing upcoming projects. 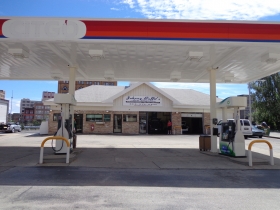 This Citgo station is converting to BP. Photo by Michael Horne.

According to John Wohlfard, owner of Johnny Buffit’s Auto Emporium, 350 N. Plankinton Ave., the riverfront building it shares at the southwest end of the St. Paul Avenue bridge with a BP gas station (until recently Citgo) has been sold.

The gas station/convenience store portion will remain, according to a not-friendly clerk, who chased this reporter off the property for taking photos there. (The ones you see were taken from the public ways.)

But Johnny Buffit is indeed on the move, and plans to be in its new location at 515 S. 1st St. by September 1st. The site is currently a Sherwin Williams paint outlet. 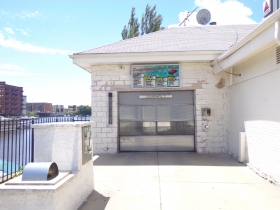 Currently the old and new Johnny Buffit buildings are still listed as being owned by Horner Sod Farms LLP, which has the unlikely address of 646 S. 2nd St., where not a blade of grass is to be seen. That is the location of American United Cab Company, and the home office of Mike Sanfelippo, its owner. (It may well be his home, too, since the building also includes an apartment and Sanfelippo has a residence in Florida.)

Wohlfard, of Buffit, says he thinks the new location, adjacent to the Duke Roufus Boxing Academy, and across the street from Independence First, will give his business better visibility than the current location. It is also a bigger building. 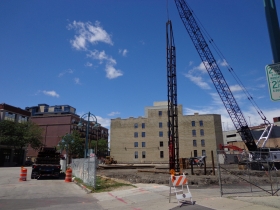 Mai Thai Restaurant, 1230 E. Brady St., will reopen Friday, July 26th, with a new owner, a new menu and a new facade. … Two50Two, the new Milwaukee Institute of Art and Design residence building at 252 E. Erie St., is coming along. The old building has been demolished, and now earth-moving equipment is sifting through the cinders on the site, actual remnants of the 1892 Third Ward Fire. Pilings are being driven into the ground at last look  It is an Engberg Anderson design project… Ald. Nik Kovac will have a busy weekend ahead of him. Thursday, July 25th, 2013, he plans to hold his annual birthday party event, this time at the Hi-Hat Garage, 1709 N. Arlington Pl., the same site where his predecessor, Ald. Mike D’Amato had his farewell party in 2008. Friday will bring more excitement for the second term alderman as the Riverwest 24 hour bicycle race , “The People’s Holiday,” kicks off at 7 pm right in his neighborhood. There will not be an empty sofa from Riverwest to Bay View. Try to make it there at any hour to see some remarkable cycling, drinking and community-building… At 1323 E. Brady St., just across from the Hi-Hat, workers are busy turning the former Crisp into Jack’s American Pub, a restaurant/lounge. It is scheduled to open Thursday, July 25th. The new pub has a license to sell food and beverages on the street during the Brady Street Festival, Saturday, July 27th. The work crews here and elsewhere seem quite adept; some were hanging pictures while other were hanging light fixtures this week. Workers in this city have developed considerable expertise in turning over properties rapidly with little downtime for the owners. … When Ryan Braun’s Graffito opened, the star slugger promised he’d try to drop in as his schedule permitted. Well, it looks like he has 65 more opportunities to do so this year than he originally expected, but he was not at his restaurant on Tuesday, July 24th, when everyone in town seemed to be discussing his suspension from baseball.  Nor were Bud Selig and his wife Sue at the Skyline Music Series that evening, although they are expected to take in the concert at the amphitheater that bears their name one of these weeks, and Urban Milwaukee will be there.

The St. Paul Episcopal Church Resale Shop, located in an old home at 1234 N. Marshall St., just to the north of the church, an Edward Townsend Mix- masterpiece, will close after July 30th for its annual month of cleaning and restocking. It has always been my go-to place for Milwaukee Country Club coffee mugs, University School-Milwaukee neckties and other tasteful quasi-Anglican paraphernalia. I picked up a fabulous Burberry double-breasted jacket with brass buttons for just $3! Made in England! I look like Prince Charles! The shop will open on its usual Tuesdays and Saturdays in September.

4 thoughts on “Plenty of Horne: St Paul Bridge Will Be Rebuilt”