His decision on gerrymandering case could ruin Supreme Court’s reputation. 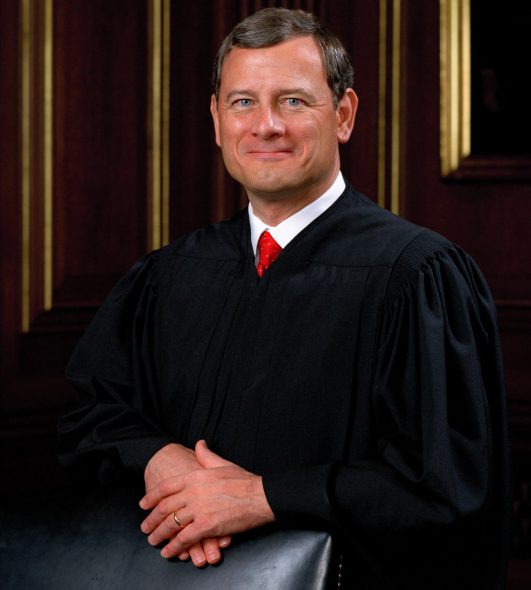 John Roberts. Photo is in the Public Domain.

At the October 3 US Supreme Court hearing on Gil v Whitford, the challenge to the Wisconsin legislative gerrymander, Chief Justice John Roberts expressed the concern that the public would view the court’s decision as favoring one party over the other. “And that is going to cause very serious harm to the status and integrity of the decisions of this Court in the eyes of the country.”

That is not a new theme from Roberts. He and other justices decry the notion that they are increasingly considered “politicians in robes,” who use the courts to pursue a partisan and ideological agenda. In his confirmation, now-Justice Neil Gorsuch rejected this view: “If I thought that were true, I’d hang up the robe.”

Increasingly, news articles, in describing controversial court decisions, list the president—whether Democratic or Republican—who appointed each judge. It is disturbing how often the judge’s vote can be predicted from that tabulation.

Like Bush v Gore, the partisan stakes are higher than normal in Gil v Whitford. In Bush v Gore, the Court decided who–the Republican or the Democrat–would become president. In Gil v Whitford, it will decide whether Wisconsin returns to competitive elections or the Republican Party retains its legislative monopoly. However the Court rules, many Americans will believe the justices voted according to their partisan preferences.

Are partisan gerrymanders a growing threat to American democracy? Defenders of the Wisconsin plan say no. Here is Wisconsin Solicitor General Misha Tseytlin: 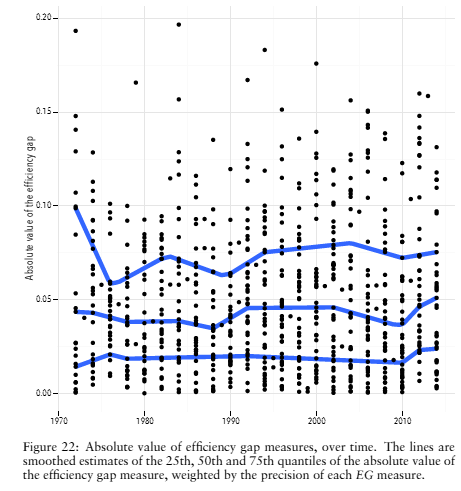 Two pages earlier in the same report, figure 20 tells a more complete story. In this chart efficiency gaps favoring Democrats are shown above the black line and those favoring Republicans below it. The further from the black line, the more bias the election showed.

While Figure 22 does not indicate a trend in one direction or the other, Figure 20 shows a distinct pattern. Starting in the 1990s gerrymandering that favored Republicans became more common and that favoring Democrats less so. 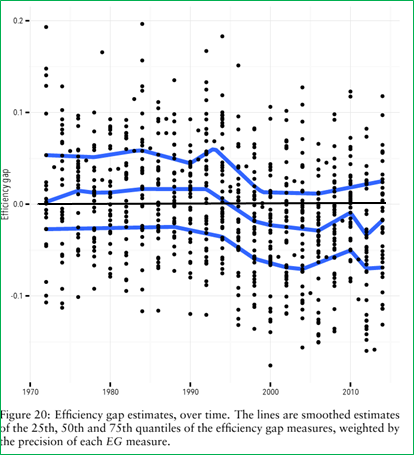 This trend does not prove that Democrats became more virtuous. Perhaps Republicans simply had more opportunity: increased Republican control of three branches of government has allowed them to redistrict with abandon while ignoring Democratic objections.

In his questions, Justice Alito tried another tack to prove that partisan gerrymandering was not a growing problem. He quoted a paper in which one of the developers of the efficiency gap tool said “that redistricting is at best a blunt tool for promoting partisan interests.” In a column titled Fake news has come to the high court, the Washington Post’s Dana Milbank reports that he called the author of the paper who said he used data from the 1970s through the 1990s. In a later paper, by contrast, “we used updated data from the 2000s,” McGhee told me, “and the story is very different. It’s gotten a lot worse in the last two cycles  . . . The data are clear.”

The recent Republican enthusiasm for partisan gerrymandering among Republican politicians is not shared by their constituents. Here are the results of a recent poll by Lake Research Partners and WPA Intelligence that asked, “Would you say you generally favor or oppose the Supreme Court setting new, clear rules for determining when partisan gerrymandering violates the Constitution?” There was overwhelming support for this among Democrats, Republicans and independents. 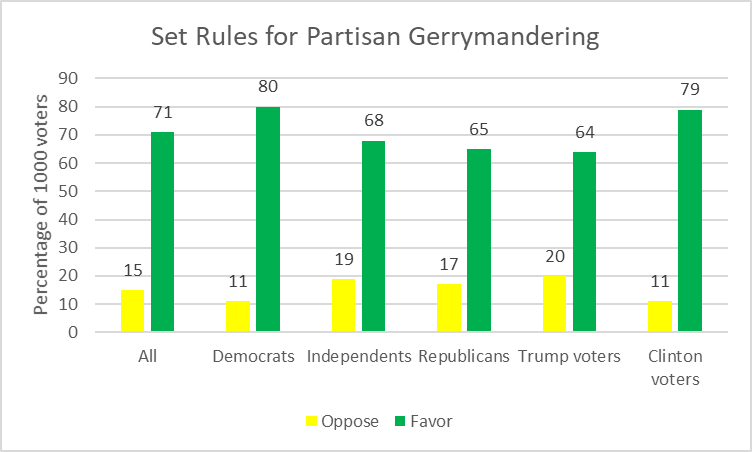 It should be noted that the sponsor of this poll, the Campaign Legal Center, is hardly a disinterested party. It is a long-time opponent of partisan gerrymandering and the employer of Paul Davis, who argued against the Wisconsin gerrymander before the Supreme Court.

Justice Roberts’ expressed fear that the Supreme Court decision would support the perception that the Supreme decides cases on partisan considerations is well-founded. However, he misses the source of the danger. Here is his argument:

And if you’re the intelligent man on the street and the Court issues a decision, and let’s say the Democrats win, and that person will say: Well, why did the Democrats win? And the answer is going to be because EG was greater than 7 percent, where EG is the sigma of party X wasted votes minus the sigma of party Y wasted votes over the sigma of party X votes plus party Y votes. And the intelligent man on the street is going to say that’s a bunch of baloney. It must be because the Supreme Court preferred the Democrats over the Republicans. And that’s going to come out one case after another as these cases are brought in every state. And that is going to cause very serious harm to the status and integrity of the decisions of this Court in the eyes of the country.

I find this statement extraordinary. Roberts has the reputation of being an intelligent man. Certainly, he is the beneficiary of a very expensive education. However, the statement drips with anti-intellectualism and anti-intelligence. It suggests he hasn’t bothered to take the time to understand the efficiency gap. He even manages to misidentify the source of the “gobbledygook.” It is not sociology, but political science and mathematics. By mocking the use of statistics to measure fairness, he reinforces the perception the justices are politicians with robes. At the very least, he doesn’t think much of the intelligence of his “intelligent man on the street.”

Contrary to Roberts, the efficiency gap is not hard to understand and a brief summary may be order. It starts with the concept of “wasted” votes, defined as the sum of votes for candidates who lose and votes for winners in excess of the number needed to win. Assume that each party has exactly the same number of voters. For my party to win, it needs the other party to have more wasted votes than mine does. The way to do this is to make sure there are many of the other party’s voters are packed into a few districts where most of the voters support that party and the rest are scattered about in districts where they form a minority.

A simple rule of thumb is that Supreme Court decisions stand up best to history when they advance democracy. When Justice Sotomayor asked Erin Murphy, the attorney representing the Wisconsin Senate, “Could you tell me what the value is to democracy from political gerrymandering? How — how does that help our system of government?” Murphy was unable to answer. In truth partisan gerrymandering corrodes democracy and offers no offsetting benefits.

The history of the one-person one-vote cases suggests that the concerns expressed by Justices Alito, Gorsuch, and Roberts are unlikely to be realized. In 1946 (Colegrove v. Green), writing for a 4-3 plurality, Justice Felix Frankfurter held that the federal judiciary had no power to interfere with issues regarding apportionment of state legislatures. Sixteen years later, in Baker v. Carr, the court reversed itself. Frankfurter dissented, predicting that the Court was entering a political thicket and would lose public support. In fact, making sure that districts’ populations are approximately equal has become a routine part of redistricting today. The designers of the Wisconsin gerrymander made absolutely sure to make every district had the same population.

The Republican establishment and their allies have chosen to intervene with the Supreme Court in support of a redistricting plan that entrenches one party in power for the foreseeable future. Contrary to Justice Roberts’ expressed fears, the danger to the Court’s reputation is not that the solution will be viewed as too complex. It is that the Court will, in effect, be seen as a willing party to that power grab.