The Plague of License Suspensions

Black men are 10 times more likely to have drivers licenses suspended for not paying fees.

By Angie Schmitt, Streetsblog - Oct 8th, 2017 11:39 am
Get a daily rundown of the top stories on Urban Milwaukee 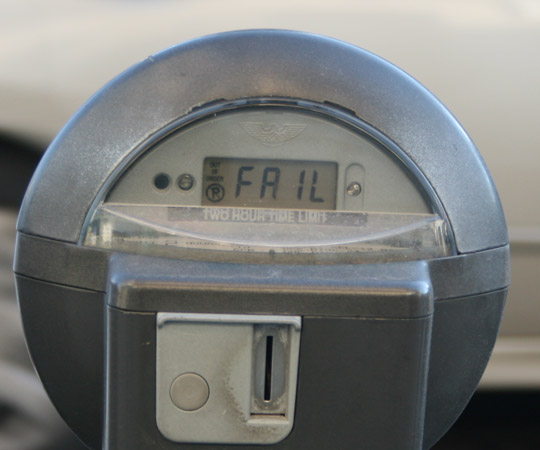 Never doubt that the American system of transportation is oppressive.

In the average American city, access to a car is practically a prerequisite to securing employment. Knowing this, state and local governments in much of the country use the threat of driver’s license suspension to impose fines and sanctions that can entrap people in a vicious cycle of indebtedness. The burden falls most heavily, of course, on people who can least afford it, an issue explored most recently by Henry Grabar at Slate.

Grabar details how license suspension has become a catch-all penalty in much of the country, applied in many cases that have nothing to do with dangerous driving:

Over the past 15 years, dozens of U.S. states have moved to suspend more licenses for court debt, fines, and fees, and unrelated offenses. In 2006, nearly 40 percent of license suspensions in the U.S. originated with offenses like unpaid traffic tickets, drug possession, or unpaid child support — violations the American Association of Motor Vehicle Administrators, or AAMVA, categorizes as “social non-conformance.” That was a 34 percent increase from 2002, according to research by Robert J. Eger. The surge has left millions of Americans the choice between driving illegally and reorganizing their lives around alternative transportation. The first option leads to debt and trouble with law enforcement, the second to poverty and unemployment. Three in four Americans with suspended licenses choose to keep driving, according to the AAMVA.

Grabar focuses on Michigan, where something as mundane as a parking ticket can compound into a cascading series of fines, license suspensions, and punishing debt thanks to something called the “driver responsibility fee,” a surcharge the state created during a budget crunch in 2003.

Because driving has become more of a necessity than a privilege in the American transportation system, reorganizing your life “around alternative transportation” can be exceedingly difficult in many places. And the same governments that rely on license suspensions and associated fines do little to provide people with decent transit options. In Detroit, for instance, where these fines are raking in millions, the state is spending big on highways while the transit system is left to languish in a state of perpetual disarray.

Detroit is hardly unique. According to the Brookings Institution [PDF], the typical resident of a U.S. metro area can only reach 30 percent of jobs available in her region within a 90 minute transit ride. 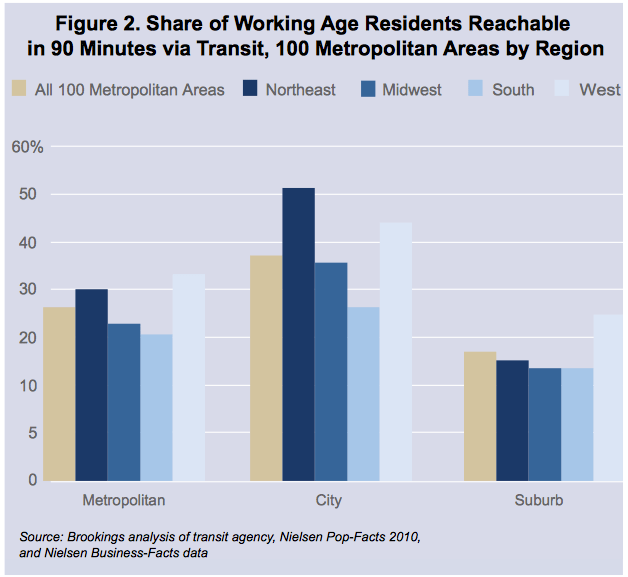 In almost all of America, most jobs are not accessible by transit to the average resident. Chart: Brookings Institution.

There is a pronounced racial disparity in the application of license-based legal penalties. In Wisconsin, the Atlantic‘s Alana Semuels has reported, black men are 10 times as likely as white men to have their license suspended for failure to pay court fees or fines — which often stem from superficial transgressions unrelated to driving, like violating Milwaukee’s curfew law for minors, or “disorderly conduct.” Fully 60 percent of license suspensions in the state are for failing to pay government-issued fees, not unsafe driving, Semuels reports.

There are efforts underway in Michigan and other states to lessen the burden of these suspensions and fines, Grabar reports, but reforms often run up against conservative legislatures that have become accustomed to the revenues generated.

People shouldn’t need a car to hold a job — but in much of the country they do. It will take decades to create transportation systems where driving privileges aren’t the key to employment. In the meantime, states shouldn’t consign people to a life of joblessness and debt because they can’t pay fines.

6 thoughts on “Streetsblog: The Plague of License Suspensions”