Schimel and Pruitt, the Anti-Environmentalists 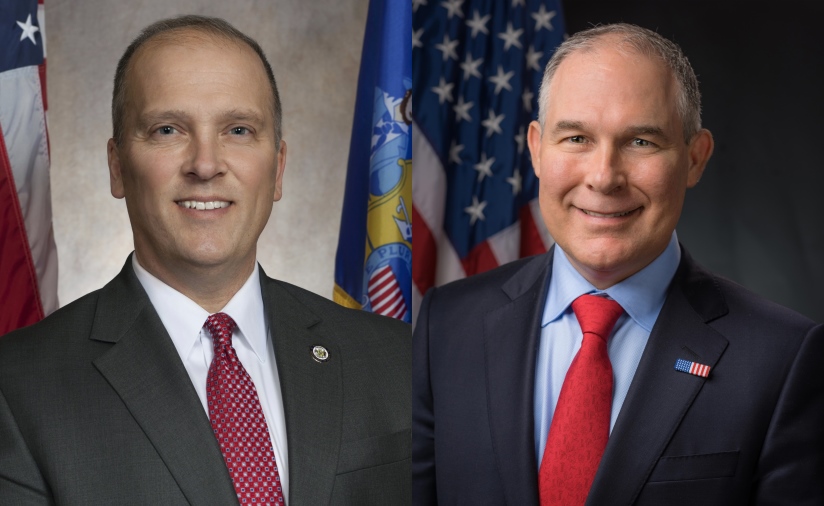 Wisconsin Attorney General Brad Schimel and federal EPA Administrator Scott Pruitt make quite a team when it comes to rolling back clean air and water protections:

*At the EPA the new number 2 guy is a coal lobbyist nominated by President Trump.

*But Schimel beat Pruitt to the coal-industry-lobbying-hiring punch by tapping (back in 2014) a lobbyist for The American Coalition for Clean Coal as the AG’s top aide, noted here.

* Schimel later forced out Tom Dawson, the agency’s leading environmental lawyer, created an in-house team in the Attorney General’s office that specializes in suing the federal government which includes Dawson’s replacement, David Ross, an out-of-state pro-business attorney. Now it has been reported that Pruitt reportedly will draft Ross from the team as a senior administrator in the EPA’s water office.

* Pruitt wants to kill on behalf of Big Coal President Obama‘s clean power plan, and Schimel is among the Attorneys General in court carrying the ball:

“I am incredibly proud of our top-tier team at the Wisconsin Department of Justice that is helping to lead this crucial challenge against the federal government,” said Attorney General Brad Schimel.

* And Schimel is the leading EPA ally in the courts against the federal clean water rule, as Gary Wilson, a contributor to Detroit Public TV’s Great Lakes Bureau, noted recently:

A 25-state coalition led by Wisconsin Attorney General Brad Schimel including Michigan, Indiana and Ohio has told EPA and the Army Corps that the rule allowed the agencies to “improperly expand their jurisdiction” over waterways and want the federal government to defer to the states.

*And back in Wisconsin, Schimel favored an approach overriding the Public Trust Doctrine to give away the state’s waters.

The Pruitt-Schimel approach to industry de-regulation has helped produce these outcomes, among dozens, in the Wisconsin I recently called the model hard-right-corporate state:

2 thoughts on “Op Ed: Schimel and Pruitt, the Anti-Environmentalists”