Bucks Arena On Budget, On Schedule

Plus, who are the two tenants slated to move to the Live Block? 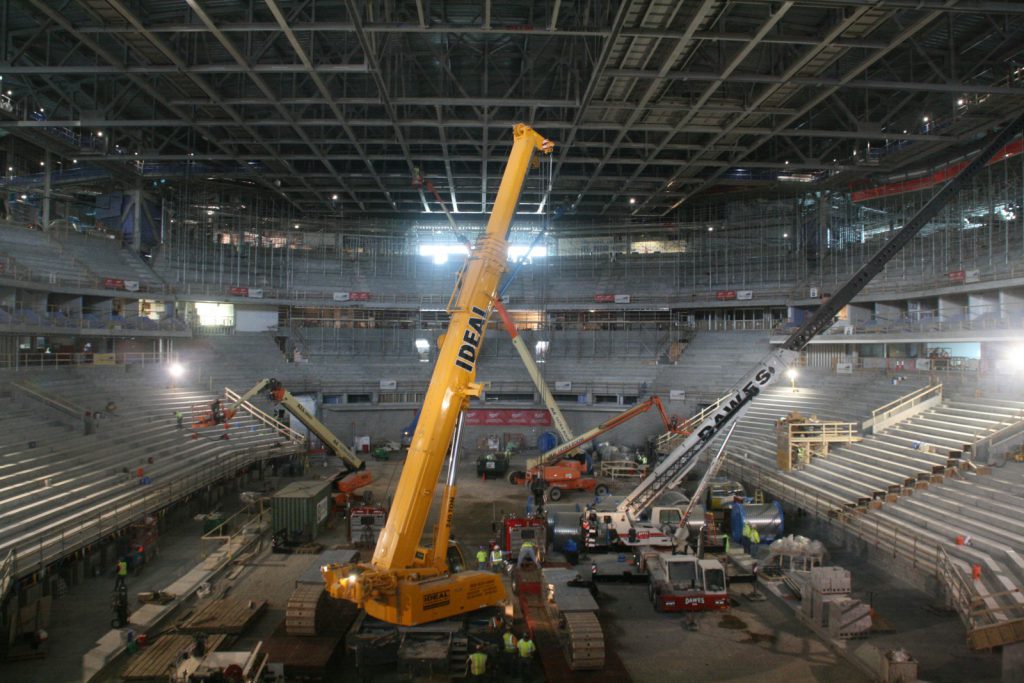 Seating Bowl at the WESC. Photo by Jeramey Jannene.

Work on the Wisconsin Entertainment and Sports Center is on budget and on time. That’s the word from the Milwaukee Bucks and project construction manager Mortenson Construction as they collaboratively work to construct the arena at the center of the $524 million complex.

The team, led by president Peter Feigin, hosted media members for a tour of the arena Thursday morning. During the tour the team showed off the arena seating bowl, soaring east atrium and zinc-paneled facade. Along the way, Feigin managed to say hello to virtually every construction worker he encountered. And workers were everywhere for Feigin to greet, with team senior vice president Alex Lasry noting that approximately 750 people were on the job site today.

The arena seating bowl is looking close to the finished product, less than 16 months after construction began. A crew was dissembling the final large crane located in the interior of the building, signaling that the final piece of precast concrete has been fitted into place. The drastically different seating plan  compared to the BMO Harris Bradley Center is already clearly visible, well before any of the seats have been installed. The lower level is substantially larger than at the current arena, which will put more seats closer to the action. The roof is also noticeably lower in the new arena compared to the Bradley Center, creating a more intimate feel. Another huge difference: the Wisconsin Entertainment and Sports Center will be 30 feet shorter than the BMO Harris Bradley Center, despite the new arena having almost 200,000 square-feet more of space.

The east atrium, which is likely to get its own naming rights deal, is the central gathering space within the arena and one of its most attractive. It marks the transition from the open air plaza being built on the former N. 4th St. to the interior of the arena, and features nine escalators to facilitate the flow of guests between the four levels. Those escalators, all of which are now in place, are being installed and configured by JCP Construction, one of the many city-certified Small Business Enterprise firms participating in the project.

As part of the city-financing component of the arena, the Bucks are required to spend 25 percent of the project budget with SBE firms and 40 percent of the project hours on city-certified Residents Preference Program participants. RPP is designed to employ under- or unemployed city residents. The team has consistently exceeded both targets for the project, and during the tour Lasry stated “we feel very confident we will be able to keep that pace.”

The publicly accessible Panorama Club, which includes a cantilevered balcony extending beyond the arena’s eastern wall, will also feature views down into the atrium. Besides the views from above, there will be plenty of action on the first floor with the south end of the atrium housing the Milwaukee Bucks flagship team store. The store will be open year round.

The final stop on Thursday’s tour was along W. Juneau Ave. for the Bucks to highlight progress on the exterior of the building. With the roof now in place, the building is scheduled to be watertight by the end of November. This includes installing the many glass windows along the building’s east side.

Tess Massaroni, enclosure superintendent on the project for Mortenson Construction, detailed the four-layer stack that makes up much of the building’s exterior. The lowest level is made up of insulated metal panels, which is the light green material visible on the arena’s surface for the past couple months. Next comes a high temperature underlayment and then a hat-shaped channel made of galvanized steel (it’s called a “hat channel”) to support the final layer. And it’s that final layer that will have everyone casting their opinions on the building for as long as it stands. Feign notes, “this is the point that sets this arena apart from any building in the arena.” What is it? An interlocking set of zinc panels with a patina that causes them to look like wood.

And while Feigin might be overselling the uniqueness of the panels given that the training facility across the street also uses a variation of them, they certainly do give the arena a unique look.  When the zinc panels are all finally installed, which will come after the arena itself is water tight, the facility will be covered in 120,000 square-feet of them. For a durable metal product they’re not heavy, with each panel weighing less than five pounds, but at the scale they’re being used they’ll be visible from far away. They’re all slightly unique, different from one another, which should cause the arena to age well, at least visibly, as their diversity should hide any wear and tear.

Mortenson Construction, who is leading the construction of the arena, is also working to repair zinc panels on the 13-month-old U.S. Bank Stadium in Minneapolis. That stadium, home of the Minnesota Vikings, had an issue with zinc panels becoming loose and flapping in the wind. Massaroni noted that this issue won’t affect the Bucks arena, because an entirely different system is being used to install the panels, including interlocking them together. In addition, the contractor has constructed test installations and run them through high-speed wind simulations to ensure their durability. Further differentiating the two stadiums, the panels on the Bucks arena aren’t designed to change in appearance over time, while the Minneapolis panels are expected to continue to patina for the next 10 to 20 years.

While it’s still far from being open to traffic, W. Juneau Ave. will begin to resemble a street again soon. Crews will begin installing bollards and other streetscaping features along the street as they rebuild the sidewalk that was demolished to make way for construction.

Work on the first floor of the north side of the arena is nearly complete, with the walls being made of a cream colored brick. Said Feigin, “you can’t build an authentic Milwaukee building without a touch of cream brick.” No doubt, but it remains to be seen how much street-level activation will occur along the north side of the building. The cream colored brick is better than cinder blocks, but I’m still concerned about the long stretch of blank walls that I previously called “the biggest problem” with the arena design. At a public hearing on the design, Feigin did note that the team is looking to install public art along that side and I’ll refrain from final judgement until that and the soon-to-be installed streetscaping is in place.

The arena is scheduled to open in Fall 2018. Don’t bet on a Bucks game being the first event in the new facility, though: at a city committee hearing on the project’s hiring practices, Lasry noted that the team is looking at other options for grand opening acts. 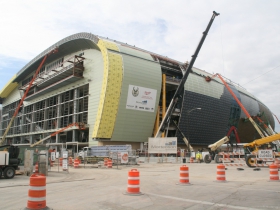 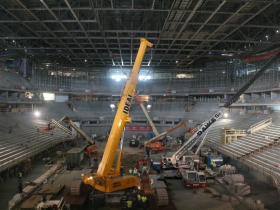 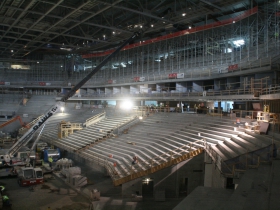 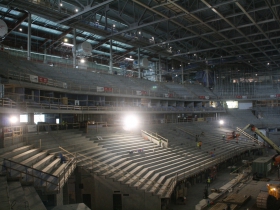 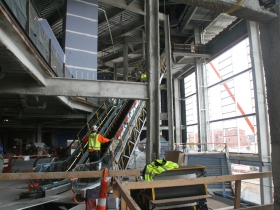 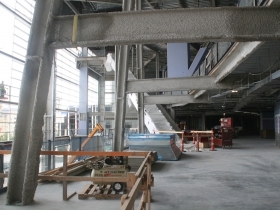 Work is ramping up on the Live Block entertainment complex immediately east of the arena. While the team is currently seeking city approval to slightly modify the design of the complex, including finalizing links to N. Old World Third St., they’re also preceding with construction.

Feigin disclosed that the Bucks have signed letters of intent with anchor tenants for two of the three buildings in the complex. When asked when they will be announced, Feigin stated “we want to announce it as soon as we can.”

The three new buildings are being built on land that was previously the site of the 4th and Highland Parking Garage. Veit led demolition of the garage for the Bucks. The city transferred ownership of the garage to the Bucks as part of the broader arena financing package. Hunzinger Construction is leading construction on that portion of the project.

The Live Block, similar to the Bucks’ training facility, is being privately financed and will be owned by a Bucks-affiliate. The project is being managed by ICON Venue Group for the Bucks-affiliated Head of the Heard. The 714,000 square-foot arena and parking garage have an estimated cost of $524 million. An estimate for the cost of the Live Block has not been made available. The Live Block was originally scheduled to open with the new arena in the fall of 2018, but team officials have now acknowledged it will likely miss that deadline.

Blair Williams of WiRED Properties is serving as a consultant for the Bucks on the project.

Marc Farha of ICON Venue Group, who serves as the Bucks’ owner’s representative on the project, noted the team is currently evaluating bids for the demolition of the BMO Harris Bradley Center. As part of the arena financing deal, the team must start demolition on the Bradley Center within 180 days of the new arena opening.

Feigin noted there wasn’t any news to report with regard to a potential naming rights deal for the arena. The Bucks, however, continue to announce founding partners for the arena, which may give a hint as to who the naming rights partner won’t be. Those partners include BMO Harris Bank, MillerCoors, Johnson Controls and Froedert & the Medical College of Wisconsin.