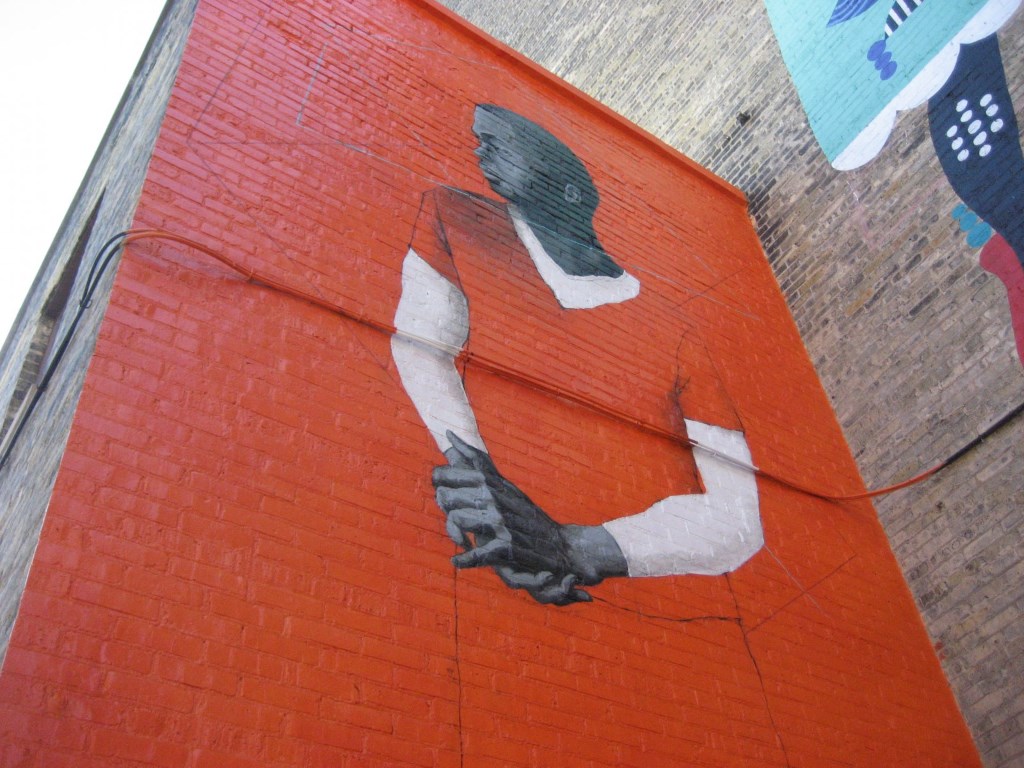 The recent controversy generated by the Kendall Jenner Pepsi ad, which appropriated the Black Lives Matter movement to sell a soft drink, is just the latest example of how marketers and media outlets can be tone deaf and culturally insensitive when it comes to race and image.

A classic example is a feature article on fashion in the September 2017 issue of Milwaukee Magazine. Entitled “A Cut Above,” it boasts of how dozens of “designers spent months cutting, sewing and finishing their 2017 collections for Milwaukee’s Fall Fashion Week in September.” The five-page spread includes models giving a sneak peek at some of the fashions, along with brief bios of the designers.

I’m not a fashionista, so I was only paying casual attention as a flipped through the spread. My attention abruptly went into full focus, however, and my blood pressure went up, when I saw the third page of the spread. The model poses, in a mini-dress by Sarah Nasgowitz, in front of a mural of a black man wearing “prison orange.” The mural is one of many in Black Cat Mural Alley, an open-air mural gallery on the East Side. When you see the mural in person, it takes your breath away because of its large scale.

The painting, “Devontay,” of the black man in prison orange is bold and portrays the dark reality of far too many African American men in Wisconsin. Artist Adam Stoner told TMJ4 news the painting is meant to have a social impact: “The image should never be normalized to anyone.” As State Bar of Wisconsin President Fran Deisinger stated in a March 1, 2017 article, “The issue of mass and disparate incarceration is one of the most important justice issues in our state.”

But such points were lost on the photographer of the photo, Aliza Baran; the magazine’s art director, Paul John Higgins; and the editor-in-chief, Carole Nicksin. Apparently, at no time during the process of setting up the shot, photographing it, selecting the photos, and making the final decision of what goes and what doesn’t into the layout did it dawn on any of them: “Uh, maybe we should consider a different photo.”

Perhaps Milwaukee Magazine and its editors were too consumed with their role as the city’s cheer leader to notice its glaring error. The magazine helps portray a Milwaukee that is cool, hip, trendy and focused on attracting young business professionals and even younger, freshly college graduated millennials thirsting to make their fortune in affluent new corridors of power and success, such as the Third Ward, the Fifth Ward, and recently constructed neighborhoods along the Milwaukee River.

But the new Milwaukee isn’t for many long-time denizens of this metropolis who are people of color, who see a city with a horribly high number of incarcerated black men and boys from impoverished communities.

Milwaukee has the largest population of blacks in the state and Wisconsin is known for having the highest incarceration rate of black males in the country, most of whom were arrested and convicted in this city. Considering this disparity, it is troubling to see a white model posed seductively in front of the imprisoned black man. The details of the 4,000 plastic cable ties that make a geometric pattern in the mini dress have no significance in contrast to the man with nothing but time on his hands that she stands before.

I’m not sure if the magazine’s staff did this on purpose or out of ignorance. Nonetheless, it is a tasteless display in a city trying to move past a reputation as one of the most racially segregated in America.

It would behoove marketing and media companies to diversify their ranks. This would greatly reduce—if not eliminate—such editorial mistakes. This problem has been known and talked about for decades, but recent reports show that nonwhite staff make up only 5 to 6 percent of marketing and advertising organizations nationally. The time is long overdue for cultural inclusion for those overseeing marketing campaigns, and at the tables of editor’ meetings.

Clarene Mitchell is managing partner of TCM Communications LLC, a husband and wife team dedicated to helping professionals, entrepreneurs and nonprofits tell their stories. Collectively they have 50+ years of communications expertise; Thomas as an editor of a community newspaper and Clarene as a journalist and public relations professional.