If the Foxconn deal is the new standard, the subsidy for Amazon could reach $10 billion.

Years ago, I attended a talk by the Nobel Prize winning economist George Stigler to an audience consisting mostly of business executives. Stigler, generally regarded as conservative, developed the theory of regulatory capture. This says that government regulators will often end up protecting the interests of the very firms they are charged with regulating.

In his talk, Stigler told his audience that if they announced that, as a matter of principle, they would no longer accept government subsidies, he would write a letter complementing them for their stand. He added that he would also sell their stock short. Stigler’s point, that what is good for business is not necessarily good for a market economy, is still very relevant today.

This coziness between government and business is reflected in the popularity of economic development subsidies from state and local governments to business firms in the hopes that jobs will be created as a result. Amazon’s request for proposals (RFP) for a second headquarters (HQ2) has resulted in a feeding frenzy among American cities and states.

Amazon has emerged as one of America’s most successful companies, the fourth most valuable as measured by its market cap. It is admired for its ability to shake up existing markets and, in contrast to companies that spend profits in buying back stock or enhance profitability by closing plants, to aggressively reinvesting for further growth. Jeff Bezos, its CEO, is further admired for the revitalization of the Washington Post since he has bought it.

On the down side, Amazon’s growth has come at the cost of local retail businesses. This “disruption” has been defended as the free market in action, reflecting Amazon’s ability to respond to changing consumer tastes. In this view, local stores are closing because Amazon is able to give consumers lower prices, more variety, and better service.

Amazon’s success has come with a healthy dose of state and local government subsidy. Amazon’s successful attempts to extract government money are reflected in a running tabulation maintained by Good Jobs First. The estimated total now exceeds $1,135,000,000. Here are the subsidies only since 2016: 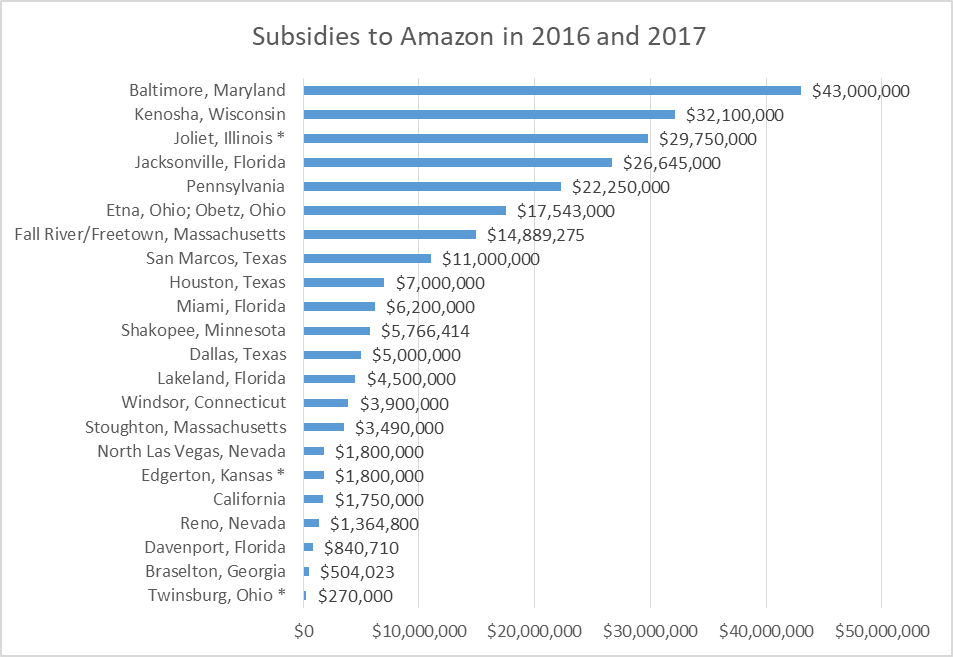 The local business that closes because of competition from Amazon may, through its taxes, have helped subsidized Amazon’s expansion. Taxes paid by local Wisconsin stores—as well as Wisconsin sales paid by the store’s customers—helped pay the $32 million subsidy to the Kenosha County distribution center that allowed Amazon to deliver packages more quickly.

Amazon has since 2012 established an internal group with high expertise in seeking economic development incentives. And … it has recently advertised for additional senior staff in that department.

Last week I looked at factors that suggest that Milwaukee fits Amazon’s goals for its second headquarters, and those that suggest it does not. Should Milwaukee and Wisconsin join the feeding frenzy?

A number of observers have suggested that the contest is a phony one. In this view, Amazon, a master of data analysis, has already selected the location that best fits its needs. If true, the Amazon RFP is aimed at extorting the greatest possible subsidy from the target MSA. Amazon is very open about its desire for subsidies:

When General Electric moved its headquarters from Fairfield Connecticut to Boston it was rewarded with $145 million in incentives. Yet when asked by the Wall Street Journal why Boston was picked GE’s CFO responded:

We knew we wanted to be in a more urban environment where we could actually participate in the ecosystem and be smarter and more aware as a result.

Perhaps Boston has learned its lesson. When asked about the Amazon RFP, its mayor responded that she would not get into a bidding war.

The amount of the subsidy Wisconsin offers Foxconn has stunned many who follow development subsidies. Depending on whether one accepts the estimate preferred by Foxconn (“at least 3,000 jobs”) or by Governor Walker (“13,000 jobs” leaving out “up to”), the estimates per job work out to somewhere between $219,000 and $565,000.

But Wisconsin does not hold the record for cost per job. According to a story in the Des Moines Register, Waukee, a suburb of Des Moines (and reputed Milwaukee namesake), along with the state of Iowa, has agreed to give Apple tax credits worth over $200 million to ease the pain of building a data center which will employ 50 people. As shown below, this works out to more than $4 million per job. The article also mentions an Apple commitment to giving up to $100 million to a public improvement fund for use by Waukee. 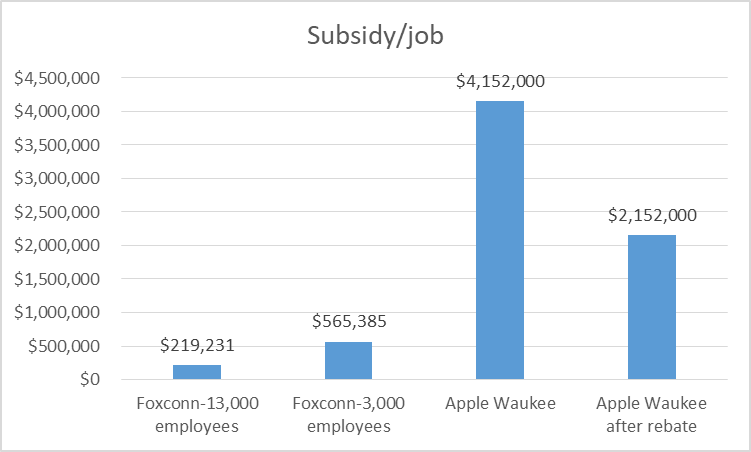 The rationale behind the Waukee incentives is puzzling. The local electric utility, Mid-America Energy, a subsidiary of Warren Buffett’s Berkshire-Hathaway, has invested heavily in wind power, allowing it to offer the lowest electric rates in the region. This offers two advantages for owners of data centers, which are electricity hogs: low rates and the chance to brag that the energy used is all renewable. Why Apple needs an extra government handout to choose Iowa is unclear. Also why Waukee, described as having the fastest-growing school system in Iowa, needs to buy more jobs is a puzzle.

The bidding war for Amazon’s HQ2 is likely to be fast and furious—and very expensive. Even Seattle has announced it plans to submit a proposal. How expensive will it be? If Wisconsin’s Foxconn subsidy is assumed to set the new going rate of cost per job, the cost for 50,000 jobs comes out to over $10 billion, making the optimistic assumption that Foxconn creates all the 13,000 jobs that the governor repeatedly promises.

Such subsidies are prominent examples of when “business-friendly” does not equate to “free market” friendly. They undermine the free market by distorting economic choices when they substitute political influence for consumer choices.

Government subsidies to private firms fail several tests for fairness. One is economic equity. They constitute a redistribution of wealth from taxpayers who may have little to business owners who may be far wealthier. Wisconsin gets much of its funding from the sales tax which is a notoriously regressive tax, hitting low income people harder because they spend a higher percentage of their income.

The subsidies also result in geographical redistribution. Even if one accepts the thesis that the Foxconn and Amazon deals would bring net benefits to Wisconsin, those benefits would be heavily concentrated in the southeast corner of the state. Yet taxpayers throughout the state would pay for them. While I agree with those who argue that the current state regime is too eager to treat Milwaukee shabbily, it is worth remembering that much of Wisconsin is suffering an economic crisis.

A recent report on the state of cities and towns in Wisconsin found a stark divide in optimism between public official in cities and larger towns and those in smaller communities. 91% of officials in communities with over 15,000 residents called employment opportunities better than five years ago; while only 51% in smaller localities did. In other words, the national recovery skipped half of Wisconsin’s smaller communities. Whatever the challenges faced by Milwaukee and other Wisconsin cities, they are far greater in places away from the cities.

Finally, to the extent that the taxpayer subsidies to private firms result in moving around facilities that would have been built anyway or subsidizing hiring that would have taken place in their absence, they represent the classic “zero-sum” game, offering no net benefit to society. Government funds would be better invested in activities that create a net benefit to society.