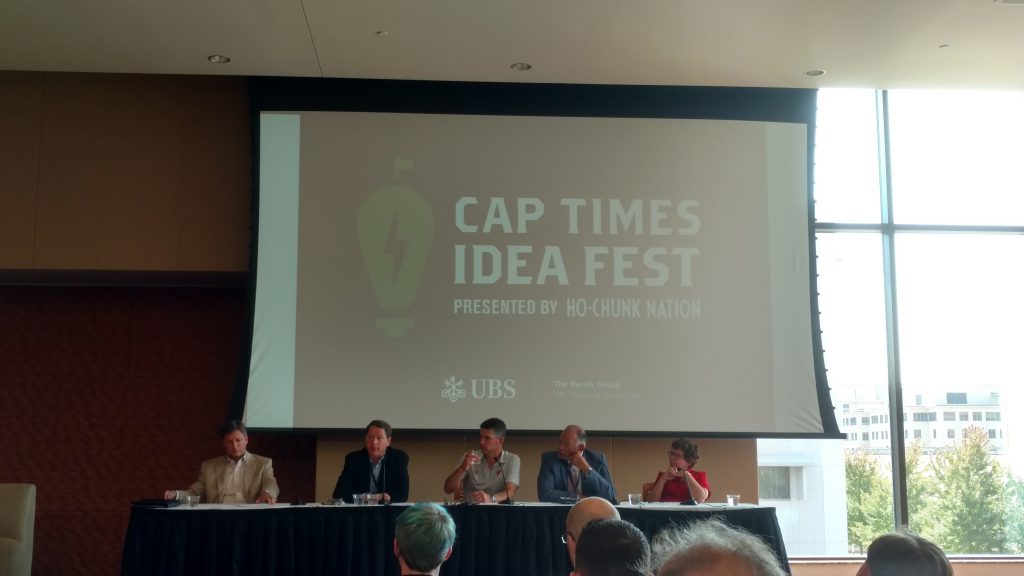 This past weekend the Madison-based and left-leaning Capitol Times hosted its first annual Idea Fest conference at UW-Madison’s Gordon Center. Various movers and shakers gathered to discuss political, social, and economic issues facing this state. Its attendees had panelists from across the ideological spectrum in both political parties as well as business and educational leaders. Pertinent to Milwaukee, one panel discussed the future of our state economy while another discussed how Wisconsin can grow its tech sector.

Where the State’s Economy is Going

While not expressly stated at the Idea Fest, scholars in recent years have generally argued that in the globalized world we live in, the future of the United States economy orients toward technology and advanced manufacturing. In this area the American economy has a comparative advantage versus other countries which instead supply cheaper labor for other types of manufacturing. That is why traditional manufacturing, with automation, has created the decline in the American manufacturing workforce over succeeding decades.

However, Northern cities that have experienced decline are undergoing rebirths and scholars have taken note. One notable title is The Smartest Places on Earth: Why Rustbelts are the Emerging Hotspots of Global Innovation. The cities that have embraced the United States’ comparative advantage with the tech sector have soared in wealth but have also created huge inequality as noted in Richard Florida’s The New Urban Crisis.

How will Wisconsin fit into the new economy? “Wisconsin is a ‘wind sock’ economy,” due to its smaller population, said Wisconsin Manufacturing and Commerce CEO Kurt Bauer. “It blows with the economic winds of what happens nationally.” All panelists agreed the future was in advanced technology and manufacturing.

UW-Madison Chancellor Rebecca Blank, an economist by training and former Acting US Secretary of Commerce, predicted the center of Milwaukee’s economy will continue in manufacturing and financial services. Manufacturing will further become more advanced and high tech. Milwaukee’s future will be built off of large companies like Northwestern Mutual, US Bank, and Rockwell Automation. “Wisconsin has a long tradition of being a manufacturing state. We do want to bring in, and bid, and grow on advanced manufacturing and precision engineering,” she said. Meanwhile, Madison would likely retain its status as the state’s research capitol retaining emphases in computer science, healthcare, and biotechnology.

What can Milwaukee and Wisconsin Do?

A majority of speakers in both panels spoke favorably regarding education and improving statewide entrepreneurialism through policy and investment endeavors. All panelists generally agreed the future of Wisconsin’s economy requires workers to have at least a two-year degree from a technical college or a four-year bachelor’s degree. “Wisconsin needs an educated workforce and research infrastructure, whether making things or selling ideas. It’s not just about education, classrooms, and students. It’s also about research,” Blank emphasized. In the subsequent panel, Kathleen Gallagher of the local tech-oriented nonprofit Milwaukee Institute, echoed a similar sentiment. “UW-Madison is ranked 11th nationally in computer science, we need to keep it there or bolster it,” she said.

Panelists also emphasized interest in technology must begin prior to higher education. “Invest earlier in education in tech skills to create a pipeline,” stated JAMF Software founder and Eau Claire native Zach Halmstad. Gallagher echoed Halmstad. “We need to get more programs like TEALS implemented in schools, there is no need to invent them.”

TEALS, an educational organization supported by Microsoft, sends volunteer computer science experts into high schools to bolster student interest and assist teachers by teaching introductory and advanced placement courses. The organization can teach cooperatively with the in-house teacher, assist in computer labs or the classroom, and even teach remotely. For now the organization’s presence in Wisconsin is concentrated in the Fox Valley area, but Milwaukee’s Messmer, Tenor, and Veritas high schools participate.

Representative Adam Neylon (R-Pewaukee), suggested schools ought to increase an emphasis in computer skills. “Wisconsin should make computer science part of the core curriculum. Separate physical and computer science, make it so computer science is not just an elective. We should also put a robotics team in every school.”

Training more workers in the right skills was a common theme. “77% of my members are having trouble finding workers,” WMC’s Bauer said of traditional manufacturers. It is likewise often the case in the software realm as well.

“I can’t find enough people in Eau Claire,” said Halmstad. JAMF, a developer of Apple software products, began in Eau Claire and while maintaining its Eau Claire operation, has moved its headquarters to Minneapolis. It is multinational and has additional offices in Cupertino, California; Amsterdam, Hong Kong, Sydney, and Katowice, Poland.

To bolster Wisconsin’s strengths, Joy Tang, urged Wisconsin companies enhance tech-based research and development. “Every big industry can create its own innovation center, there needs to be more innovation labs around big entities,” she stressed. Tang is the co-founder and CEO of the fashion app Markable, which began in Madison but now has a larger presence in New York City.

Kevin Conroy, Chairman and CEO of Madison-based Exact Sciences a developer and manufacturer of colon cancer screening tests, was critical of Wisconsin’s political climate. Conroy accused the state’s leadership of ‘starving’ state entrepreneurs of access to investment dollars. “Developing an economy isn’t really that complicated, but it’s hard. If you want job growth, all job growth comes from entrepreneurship, from young companies,” rather than giving tax breaks to legacy companies.

Conroy argued the state was investing in the wrong things and was critical of the state’s deal with Taiwanese electronics manufacturer Foxconn. “The notion of spending $3 billion on Foxconn is maddening. It’s as if Barnum and Bailey took over the capitol. There really isn’t money for the entrepreneurs, and we really have to change that.”

However, Neylon in the second session, while citing room for improvement, described Wisconsin’s past three legislative sessions as having provided “historic (state) investment in entrepreneurialism.” Neylon supported the Foxconn deal stressing the state supply chain benefits the Taiwanese manufacturer will require. Gallagher and Bauer agreed, the latter described the deal as “a fantastic opportunity for the state.”

Is there a divergence between knowledge and manufacturing? Conroy thought so. “The growth is going to occur in the knowledge-based economy, not manufacturing. Are we going to be innovators or servicers?” he said. Bauer concurred in part, suggesting Wisconsin companies can acquire the intellectual property of entrepreneurs.

The idea of Wisconsin companies buying smaller tech firms is not unprecedented and may be at times desirable. Gallagher commented that “the startup scene in Milwaukee is spotty. It’s not as cohesive as it is in Madison. There is no capital entrepreneurs group. Milwaukee doesn’t have as many startups as Madison. Milwaukee needs a connection between companies like Rockwell and a more innovative tech company. Northwestern Mutual acquired and learned from LearnVest.”

According to Fortune Magazine, Northwestern Mutual acquired LearnVest for $250 million in 2015. The objective of the purchase for the financial services company was to complement its service offerings while adapting to the times in offering digital methods for consumers to handle their financial affairs. And what about recruiting large tech firms?

Amazon and the Brew City

On bringing Amazon’s second headquarters to Milwaukee, tech-based panelists believed it was a possibility. “It would be great of course,” said Neylon, “They’d be somebody we would welcome. The workforce shortage of workers, skilled workers, and talent, is something that can be overcome.” Gallagher shared a similar opinion. “The national press says Boston. They (Milwaukee) need to have Mark Hogan lead the effort.” She attributed the WEDC CEO’s work as being a significant factor in recruiting Foxconn.

There are numerous ways the city and state can encourage further growth in STEM fields. Whether it’s recruiting well-established companies, Wisconsin legacy companies buying smaller entrepreneurial firms, or growing small firms in the state, the panelists at the Cap Times Idea Fest provided several pathways for the city and state to follow. Milwaukee and Wisconsin must encourage STEM education and research from K-12 through higher education.

Local and state government must also encourage small and large-scale entrepreneurialism. This includes startup entrepreneurialism, legacy company acquisition of small firms, and legacy companies sponsoring their own innovation centers. An example of the latter is the Global Water Center. Milwaukee’s legacy companies such as Rockwell Automation, MillerCoors, Veolia, and Johnson Controls partner with universities like UW-Milwaukee and Marquette to spur innovation. Lastly, there may also be a benefit in making more private and public research and investment dollars available for technological entrepreneurship.

In the 1800s Milwaukee successfully transitioned from an agrarian-based economy to become the mighty industrial center we are familiar with. To some extent the glory days of Milwaukee as the “machine shop of the world” are still mourned, but can the city redefine itself as the global capital of water technology and something else? Only time and hard work will tell.

Ken Smith is a Milwaukee native and graduate student at UW-Madison. He studies in the LaFollette School of Public Affairs and Department of Planning and Landscape Architecture

3 thoughts on “Op Ed: The Future of Wisconsin”