Neighboring states saw even bigger drops under Obamacare since 2013.

By Jon Peacock, Wisconsin Budget Project - Sep 13th, 2017 01:59 pm
Get a daily rundown of the top stories on Urban Milwaukee

The number of Wisconsinites who do not have health insurance fell sharply during the first three years of implementation of the Affordable Care Act (ACA), according to new survey data released today by the U.S. Census Bureau. Approximately 218,000 fewer Wisconsin residents were uninsured last year than in 2013, a decline of 42 percent.

Wisconsin is still among the top ten states in the percentage of people with insurance, but our state’s rank has been slipping. We went from being tied for 7th best in 2015 to a tie for 10th best last year. In 2016, Kentucky, West Virginia, Connecticut and Rhode Island all surpassed or tied Wisconsin’s rate of insurance coverage.

Some of the other highlights of the new American Community Survey (ACS) data include the following: 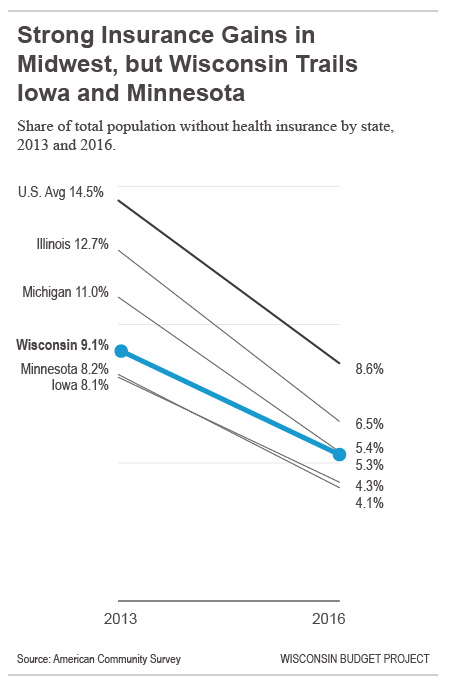 Strong Insurance Gains in the Midwest

The graph illustrates that although Wisconsin has had an impressive drop in the percentage of people lacking insurance, the four states on our borders have seen more rapid declines. In each of those states the number of people who are uninsured has dropped by at least 47%, compared to 42% in Wisconsin. If we keep moving forward and reach the Minnesota rate, there would be about 68,000 fewer uninsured Wisconsinites!

About 6 years ago, Governor Walker set a goal of cutting in half the number of uninsured people in Wisconsin. We’ve made good progress toward that goal, but to reach it we need to catch up to the progress that Iowa and Minnesota have achieved. Cutting in half Wisconsin’s uninsured rate could be achieved relatively easily by doing two things:

The new data on health insurance coverage was not the only good news released today by the Census Bureau. Another very positive finding in the national data is that the typical household’s income rose by 3.2 percent or $1,800 last year, after adjusting for inflation. The household income gain from 2014 to 2016 is the largest for any two-year period on record (with data going back to the 1960s).

Not all the news that can be gleaned from the data is positive. As Jared Bernstein pointed out in a blog post today, much of the income gain last year was concentrated among the wealthiest Americans. One reason for that is that there was little growth in wages. In fact, the average earnings of people working full-time, year-round fell by 0.4% for men, and rose by just 0.7% for women.

Unfortunately, the significant gains in health insurance coverage and poverty reduction that were achieved over the last two years could be erased very quickly by proposed legislation and budget changes being considered by Congress, and by the President’s actions to sabotage the ACA. An analysis by the Congressional Budget Office showed that proposed changes to Medicaid and Affordable Care Act would totally reverse the dramatic increase in health care coverage achieved since 2013.

We can be proud that the number of uninsured Wisconsinites has dropped sharply over the past three years, but 300,000 uninsured state residents is still far too many. This definitely is not a time to reverse direction by slashing funding for Medicaid and repealing key portions of the federal health care reform law.