By Marguerite Helmers - Sep 8th, 2017 02:31 pm
Get a daily rundown of the top stories on Urban Milwaukee 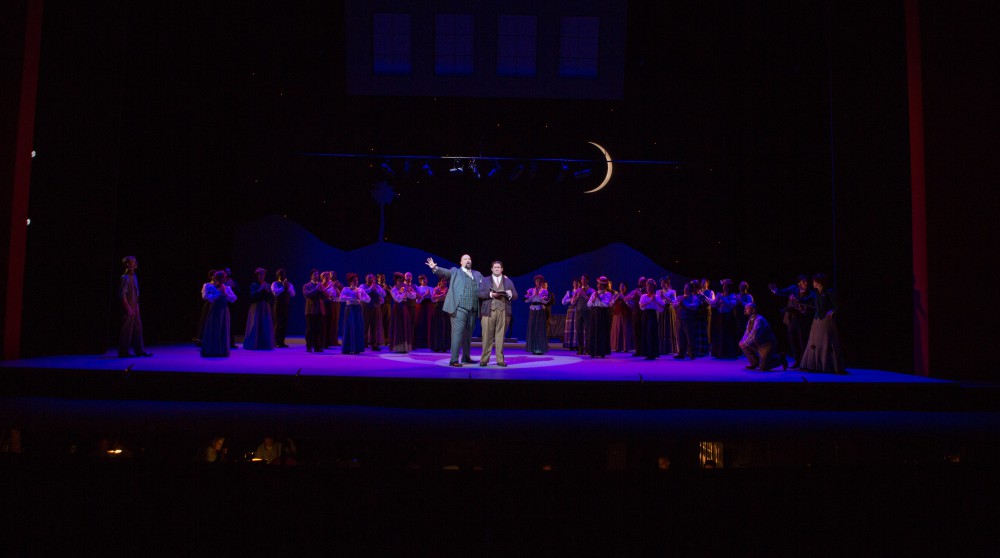 Today marks the release of Milwaukee’s Florentine Opera Company’s fourth recording. Collaborating once again with composer Robert Aldridge, the company has issued a live recording of Sister Carrie, based on the 1900 American novel by Theodore Dreiser. Starring Adriana Zabala, mezzo soprano, as Caroline (Carrie) Meeber, a young woman from Waukesha, Wisconsin who wrestles her way to fame on Broadway, the opera and book chart the emotional effects of the quest for wealth and power in American society. Despite its setting in the booming American industrial milieu at the turn of the last century, Sister Carrie reflects current themes. Dreiser articulates the concerns of what we call today the 99 percent, those whose slogans include “People not Profits.” While Carrie strives for money and social status, she is ultimately unhappy, leaving her former lover George Hurstwood destitute and disillusioned. Hurstwood is sung by Keith Phares, baritone. The Florentine Opera Company and Milwaukee Symphony Orchestra are conducted by William Boggs.

The recording adds to the growing list of critically-acclaimed recordings by the Florentine Opera. Between 2010 and 2015, the Florentine released three recordings of contemporary opera: Carlisle Floyd’s Wuthering Heights,  Robert Aldridge’s Elmer Gantry, and Don Davis’s Rio de Sangre. Each composition reflects powerful tensions in society between wealth, class, and personal ambition–and each results in tragedy. With the majority of staged operas in America dating from the late nineteenth century, the company’s emphasis on neglected modern American compositions brings important new works to listeners. These four recordings should be part of any opera lover’s collection, not least because of their technical clarity. The spotless performances by soloists and orchestra will reward repeated listening.

Each opera is based on a classic of dramatic literature. Floyd’s opera Wuthering Heights, composed in 1958 and recorded by Milwaukee’s Florentine Opera Company in 2015, is an apt realization of one critic’s comment that Wuthering Heights is “a musician’s novel.” Emily Bronte’s 1847 novel Wuthering Heights is a gothic tale of love, loss, and memory set in northern England. The orchestral score brings out the tumultuous nature of the tale, focusing on the relationship between the tortured orphan Heathcliff and the fickle Catherine Earnshaw. One of Bronte’s contemporaries found the book to be “fiendish” and pronounced, “The action is laid in hell.” That hell emerges in the sustained tension of the score by Carlisle Floyd, beautifully performed by the Milwaukee Symphony conducted by Joseph Mechavich.

Wuthering Heights was commissioned by the Santa Fe Opera, and has been called “loyal to Bronte’s novel,” with the lyrics of Cathy’s aria “I have dreamt” taken verbatim from the book. However, despite its success upon its premiere, the full work was never recorded. The Florentine Opera staged the work in 2015 and then recorded it, and was fortunate to have the composer serve as artistic advisor for the project. Florentine Opera General Director William Florescu commented that, “Floyd’s score takes you to the heart of Catherine and Heathcliff’s devastating love story.” The recording of Wuthering Heights was listed by Opera News as one of the Ten Best Opera Recordings of 2016.

The novel’s many misfortunes suit the grand scale of opera. It features passion, betrayal, revenge, forbidden love, cruelty, and hauntings. “From the very beginning, I set out to create an atmosphere of gloom and foreboding in the music,” said Floyd. Throughout, Cathy is to be sung agitato and appassionata. She has been called the ideal operatic heroine: “rhapsodic, tragic, and haunting.” A Florentine favorite, soprano Georgia Jarman, sings the part of Catherine, with Kelly Markgraf, baritone, as Heathcliff.

Similar themes emerge again in Rio de Sangre, a tale of political intrigue and treachery set in a modern fictional South American country. Commissioned and premiered by the Florentine, the opera was recorded live in October 2010, with Joseph Rescigno conducting the Milwaukee Symphony Orchestra.

The opera opens with the newly elected, idealistic president Christian Delacruz, sung by the baritone Guido LeBron, speaking to the people. “We must fight to suppress the enemies of true freedom,” he tells them, unwittingly embedding violence, conflict, and censorship into a speech that purports to extol the virtues of freedom. As he speaks, the deposed president is taken to prison, another symbol of Delacruz’s misguided politics of freedom. The story continues with assassinations, a deadly earthquake, growing civil unrest, kidnappings, and murders. Delacruz’s son dies of cholera, his daughter is executed by the opposition, his wife Antonia, with Kerry Walsh in the role, is shown to be having an affair with the opposition leader Jesús Guajardo, portrayed with intensity by John Duykers. By the end of the relentlessly bleak tale, Delacruz himself is assassinated and the opera comes full circle with a new leader addressing the people with the same speech about the necessity for freedom.

In his review of the show, music critic Tom Strini remarked on the lack of “distinct, hummable tunes [that] rise from the flow of the continuously roiling score.” Rio de Sangre composer Don Davis is known for his film scores, and the underscoring to the vocal lines exhibits a relentless intensity that pushes toward increasingly chaotic and dramatic scenes. Because the story never settles, the music doesn’t either. Reflecting the constant upheaval in the South American country where the story is set, there can never be a resolution to the music.

The libretto for Rio de Sangre was written in English and translated to Spanish by Alicia Partnoy, becoming one of only about 40 Spanish language operas in existence. Partnoy herself was the victim of political violence. She was abducted from her home on January 12, 1977 by the Argentinian Army during the coup led by Jorge Rafael Videla. Taken to a place called The Little School, she left behind an 18-month-old daughter. Partnoy was kept at the Little School for three and a half months before being released, during which time she was blindfolded and tortured. During this time, her daughter was hidden by relatives. Under the Videla regime, hundreds of babies and children were “disappeared,” either killed outright or put into camps. Many families are still searching for the disappeared.

In contrast to the sustained and churning darkness of Rio de Sangre, Robert Aldridge’s 2007 opera Elmer Gantry draws from vernacular American music and is, at times, almost joyful. “From the moment I first saw and heard Elmer Gantry, I was convinced of its importance as a new American Opera and I was excited by its ability to highlight popular American forms as a compelling work of art,” Florescu had declared.

Based on the 1926 novel by Sinclair Lewis and set in his fictional midwestern town of Zenith, the story follows the adventures of the eponymous Gantry, a feckless womanizing preacher. Yet where the novel is bleak and relentless in its satire of American evangelicalism, Aldridge’s score and Herschel Garfein’s libretto offers the hope of redemption, with the dark undercurrent that questions the nature of faith punctuated by recurring episodes of hand-clapping gospel singing. The New York Times compared the score to the music of George Gershwin and Aaron Copland.

Elmer Gantry premiered at Nashville Opera and was performed and recorded by the Florentine Opera Company in 2010, with William Boggs conducting the Milwaukee Symphony Orchestra.Keith Phares sang the role of Gantry and Patricia Risley performed the role of his love, the charismatic preacher Sharon Falconer.

The Florentine Opera opens its season with Franz Lehar’s The Merry Widow, October 20 and 22. Ticket information is available on the opera company website.

One thought on “Classical: Florentine a National Leader in Recordings”