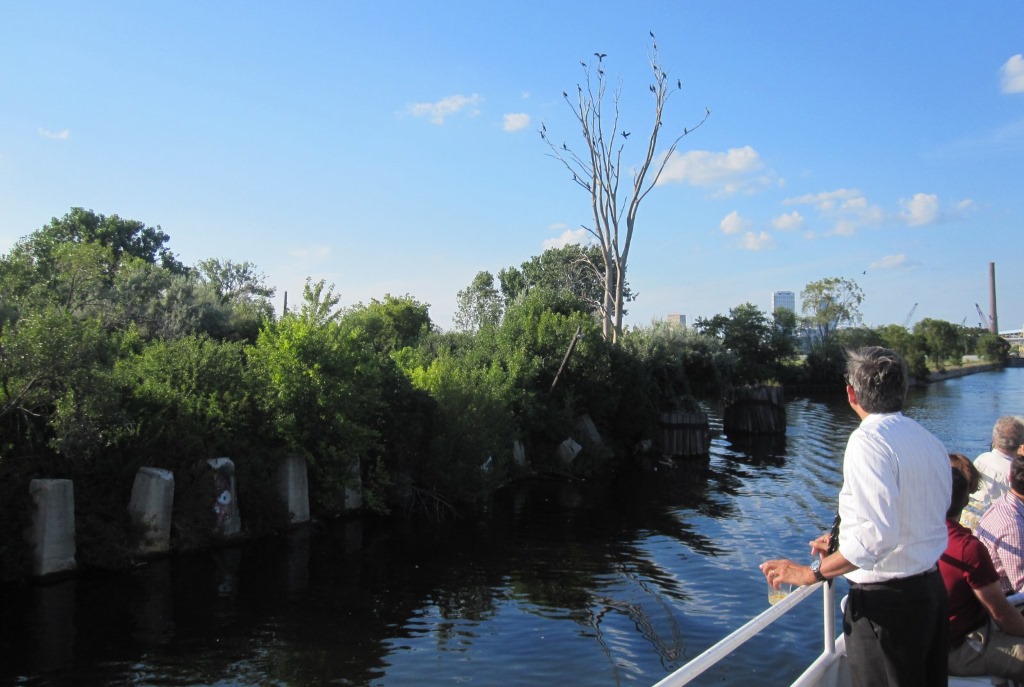 Two years after it was established in 2015, the Milwaukee Harbor District is nearing the end of its planning phase, and should be able to soon release its proposal for the redevelopment of the 1,000 acre site, with its 44,000 linear feet of water frontage.

The district borders are generally south of the Third Ward, east of Walker’s Point and north of Bay View.

Harbor District leader Lilith Fowler made the announcement to the 100 attendees at the 2017 Annual Meeting, held Tuesday at the UWM School of Freshwater Sciences, which shares its building at 600 E. Greenfield Ave. with the district.

The event featured appetizers from the Rumpus Room and beer from Lakefront and New Glarus breweries, along with a DJ from 88NINE Radio Milwaukee.

The Harbor District is officially Business Improvement District No. 51 and Fowler is executive director and oversees  an ambitious agenda:

The long-term goal of Harbor District, Inc. is to achieve a world-class revitalization of Milwaukee’s harbor that sets the standard for how waterfronts work—environmentally, economically, and socially—for the next century.

A 46-acre site on E. Greenfield Ave. was bought for $4 million this year by an affiliate of WE Energies, which has commenced a cleanup of the former Milwaukee Solvay Coke plant, long a favorite for urban explorers. A sturdy new fence has ended that clandestine activity, and the bulldozers in place will see to it that there will soon be nothing to explore. Also, a new building at 435 S. Water St., the first in decades, is under construction at this time. It will serve as a medical office building for Bocatoli LLC, a Texas firm.

Across from the school, land that had formerly housed a coal pile has since been cleared, and to the west, beyond the railroad trestle, a new Cermak grocery store and apartments have been constructed in the district. But these projects represent just a small amount of the land area of the huge site.

Count Mayor Tom Barrett among those eager to see the district’s report. “You do all the work, I take all the credit,” he told the attendees of the event. What a kidder.

Ivan Gamboa, a banker and the district chair, said a number of activities are already in the works as the master plan is refined.

He mentioned Harborfest, which will be held at the school on October 7th. It will be a Milwaukee street party, with the usual trappings and an aqueous theme.

Also, submissions were due Friday, August 11th for a mural to be painted on the trestle that crosses E. Greenfield Ave. just east of the new grocery store. The trestle carries trains, and a bicycle path.

Finally, there is the “Slash Park,” which lies at the foot of E. Greenfield Ave., adjacent to the school. It will provide a public space as well as a fish habitat.

As part of its annual meeting, the district chartered the Voyageur excursion vessel to take attendees on a curated 45-minute tour of its domain, with explanatory remarks narrated by Lindsay Frost, the Water Projects Manager.

Frost outlined the area’s history, beginning as a marsh rich with wildlife and forage, proceeding to its century as a manufacturing and distribution center, and culminating in the efforts to find a balance between nature and development in the coming years.

The single defining element of the coastline here, as the attendees could readily see, is the near universal presence of sheet piling. These corrugated panels, sunk into the underlying muck, hold back the earth and provide protection from storm surges, while also providing a vertical surface for docking large vessels.

Unfortunately, the ubiquitous pilings were not designed with wildlife in mind, so Frost and her team set about doing something about that, in line with the group’s overarching mission.

The solution, in its pilot stage, is the creation of “Habitat Hotels.” These simple modular structures fit within the corrugation of the steel sheet piling bulkheads, and have several levels, at and below water level.

Water lillies, sago pondweed, water celery and pickerel weed were all grown successfully this summer on the topmost shelf. Below, underwater planters hold aquatic plants to filter water and provide homes for insects, which in turn draw fish and other predators.

Below that, fish shelves provide a perch for invertebrates and a hang out for small fish to escape predators. Additional models are being designed and evaluated.

The structures can be outfitted for $750 each, with plans for an additional 40 to be installed by June 2019.

Frost also showed the attendees a six-acre remnant of the original habitat, tucked away along some railroad tracks near Barnacle Bud’s. A solitary, and long-dead elm tree along the sheet pile shore was filled with dozens of roosting Roufous Night Herons in a scene more reminiscent of the North Woods than of the South Side.

Among the interested citizens at the event were sculptor Richard Taylor and his wife Lynn Lucius, an arts consultant who advises the Brico Fund and other groups. Rodney Sanchez of the Nonprofit Center was joined by his wife Bethany Sanchez of the Fair Housing Council. Wyman Winston, the director of the Wisconsin Housing and Economic Development Authority (WHEDA) relaxed on the boat, going so far as to take off his suit coat, while retaining his tie.

District Board member JoAnne Anton, Director of Giving for the Herb Kohl Foundation was in a brightly patterned dress, while Ricardo Diaz, the executive director of the United Community Center, was nearby. Gary Ballesteros, also a Harbor District board member, took a break from his duties at the nearby Rockwell International, where he is the General Counsel for Latin America. Cheralyn Randall, the Associate Vice President of the MATC Workforce Solutions staff was there, taking note of the opportunities that lie ahead at the vast property of the district. She posed for a photograph with Molly McLaughlin, the Community Engagement Specialist of the district.

In addition to the mayor, the city was represented by Dave Misky, the Assistant Executive Director of the Redevelopment Authority of the City of Milwaukee. Misky is also a board member of the district, where he brings the expertise of his Masters Degree in Water Resources Management.

Rep. Jonathan Brostoff made an appearance en route to Saint John’s on the Lake, where he was to hold a listening session on the Foxconn proposal, which he opposes. Wisconsin State AFL-CIO Secretary-Treasurer Stephanie Bloomingdale, a House Confidential Honoree, (as is Lilith Fowler), was dressed in red, as was her husband Doug Savage, of the UWM Institute of World Affairs. They met the visiting Sue Krause of Buckeystown, Maryland, the aunt of this writer and mother of a foreign service officer. 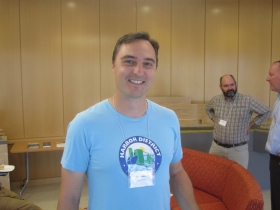 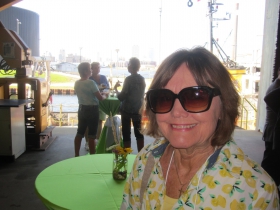 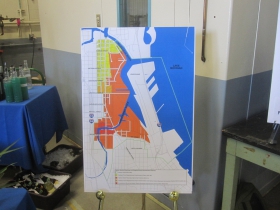 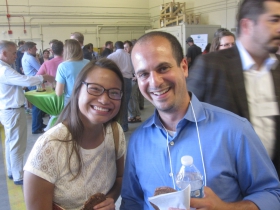 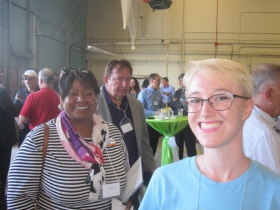 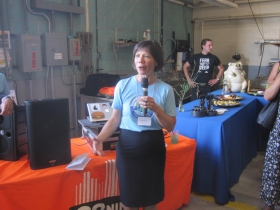 6 thoughts on “Plenty of Horne: Harbor District To Have 40 “Habitat Hotels””