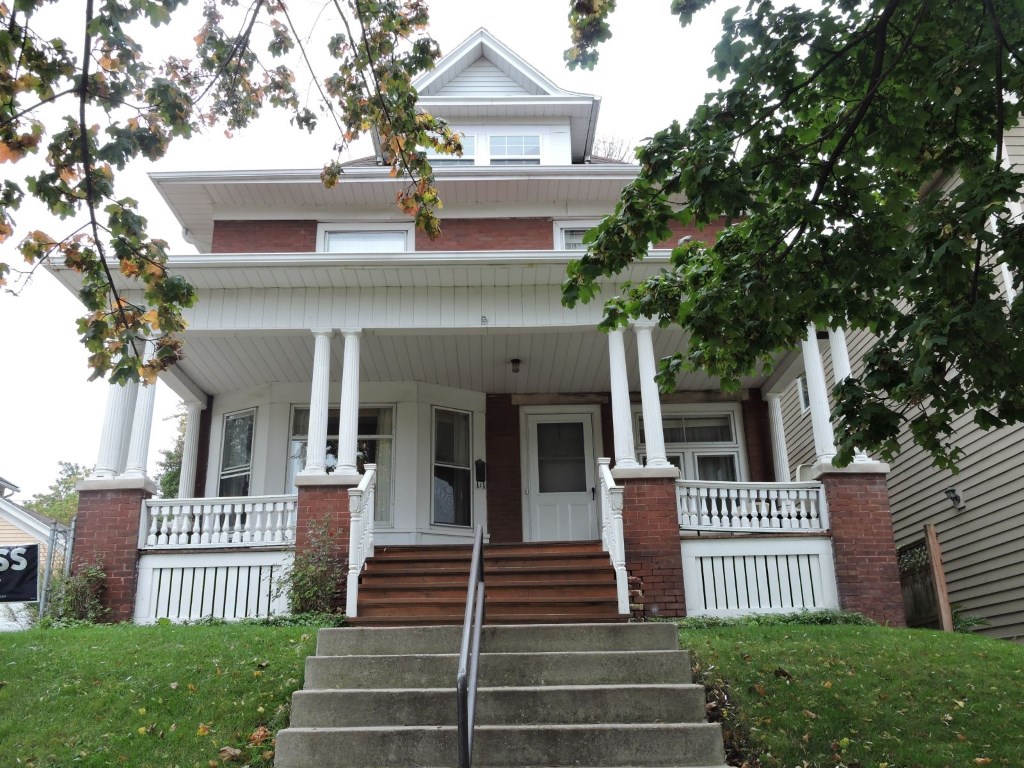 This 1909 home on N. Franklin Pl. just off Brady Street has been the residence since 2000 of union official Stephanie L. Bloomingdale, her husband, UW-Milwaukee academic Douglas Savage and their two sons.

It is situated on a 47-foot-wide lot, which is double the breadth of some neighboring properties in the working class district, where duplexes and single family houses often stand mere feet — if not inches — apart from each other.

For many years, this old part of Milwaukee was an enclave of immigrants, mostly Poles and Italians. Although the majority of the residents worked in the usual Milwaukee jobs of the 19th century, such as the nearby breweries, tanneries and other industrial concerns, the Lower East Side also was home to a number of professionals who served the community. These would include undertakers, pharmacists, lawyers and doctors. And, very often, as in this instance, their home/offices were of a slightly better quality than the neighbors, and, very often, were located on slightly larger lots.

Some of these professionals did very well as their immigrant client base climbed the social ladder, with union membership often being the first rung.

This home is located across the street from Arlington Court, a City of Milwaukee Housing Authority development that provides apartments for seniors, many of whom are union retirees. Also across the street is a one-acre clay pond that has been filling with water ever since the Boys Club was demolished there earlier this summer.

It is the site of a proposed 10-story apartment building, and the owners of this home were at the community meeting held to discuss it at Arlington Court recently. 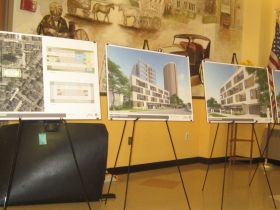 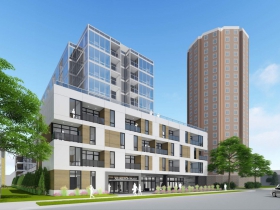 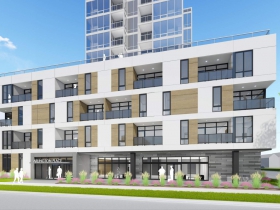 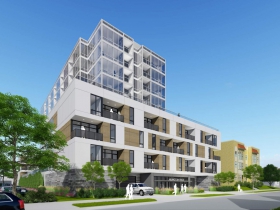 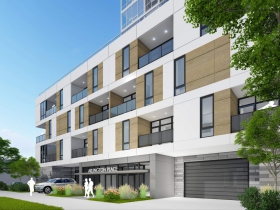 Back in 1894 the site of this home was a vacant lot that appeared to have once had some aspirations for greatness. The lot extended west through the block to what was then Racine St. (now N. Humboldt Ave.), where three identical fine speculative homes, still standing, were built behind what was to become this home. Perhaps the property awaited other similar structures, but all it got for some time were sheds.

In May, 1899, John Turzkewicz got his hands on an old frame cottage somewhere and received a permit to move it to this lot. Significantly, the structure was placed in the rear of the property, while the street frontage awaited this building, which was to arrive toward the end of the first decade of the 20th century.

The home has a 965-square foot basement, a first floor of 1,077 square feet and a second floor of 965 square feet, with a total finished living area space of 2,042 square feet.

For many years it was the home and office of John M. Schneider, a physician. In 1935 he was in this home, while William Murphy rented the cottage behind. The pair were still listed here a decade later. By 1955 it was the home of Walter F. Szmerelo, who spent two decades here. He razed the vacant rear cottage in 1956, and this home gained a back yard.

In 1979 the home was on the market, with an asking price of $43,000. It was described as a “gracious old brick colonial with large proch on the front. … Open stair case … artificial fire place … carpet only 4 years old.”

It was bought by J. Seroogy that year. He put in new electric, and certified that the hillside home was not in the flood plain. Indeed: By the time Brady Street floods, the only thing above water in the city will be the reservoir.

The assessor came by after Seroogy bought the place and was moved to transports by what he saw in the home with several stained glass and bevelled leaded glass windows. “House was well maintained. New Buyers are only the THIRD owners since it was built. This is one of the BEST homes in the area regarding good quality construction and condition.”

The home eventually found a most unlikely buyer — the City of Milwaukee Housing Authority, which bought it for purposes unknown — possibly to tear the thing down and pave a parking lot for the 230-unit, 24-story Arlington Court property across the street.

By 2000, this home was bought by the current owners from the housing authority, which had apparently rented it out over the years.

Today the home remains an attractive example of an architect-designed building in a neighborhood where such occasional treasures pop up quite unexpectedly. The horseradish factory which operated two doors to the north in 1910 is long gone, as is the Boys Club. Engine House #5 still watches over the neighborhood, and the residents here do not need to cross any streets to enjoy the delicacies of Sciortino’s Bakery, the odds and ends of Dragonfly, and the tasty taps of Hosed on Brady. The residence does its part for the campaign by hosting a “Russ” [Feingold] sign.

The biggest change to the property since the family moved in 16 years ago is a driveway that was approved for the south end of the lot. This required an action from the Board of Zoning Appeals in 2002, and the resulting approved drive “runs with the deed” to the land.

About Stephanie Bloomingdales and Doug Savage

Donald Trump has based his presidential campaign on winning the vote of non-college educated white working class males.

Stephanie Bloomingdale, the Secretary-Treasurer of the Wisconsin State AFL-CIO, has the job of seeing that union members, many of whom fit that description, do not succumb to Trump’s appeal.

Trump Wants to Know Where Are the Union Members?

At a campaign rally in Pennsylvania, Donald Trump asks the audience how many are union members. Somehow, he’s surprised to find ‘not many.’ That’s because union members know Trump is wrong for working families.

Bloomingdale’s domain includes over 1,200 affiliated unions representing 250,000 members in Wisconsin. Many union workers, especially in the building trades, are steadily employed as we enter the election season, thanks to the flurry of construction in Milwaukee. The union’s strategy is both to see that these workers support Hillary Clinton as well as to differentiate union workers from their angry, unemployed, mostly non-union brethren, and to separate them from the “basket of deplorables,” as Clinton put it.

Women union workers make 33 percent more than their non-union sisters, the AFL-CIO website tells us. The union puts out a constant stream of messages from its Twitter, Facebook, and blogging platforms, as it tries to highlight the Democratic Party message and to get out the vote.

In 2011, Bloomingdale was the first woman to be elected secretary-treasurer of the union. She previously had a 20-year career as an organizer, activist, trainer and negotiator.

She had previously worked for the Wisconsin Federation of Nurses and Health Professionals, while keeping up an active role in politics, which she mentions in her official biography:

In her electoral work, she has a statewide reputation for managing effective voter mobilization campaigns and holding elected officials accountable.

Politics looms large in this household as husband Doug Savage is the Assistant Director of UWM’s Institute of World Affairs (“Connecting Wisconsin and the world since 1960”) and producer of International Focus, the Institute’s weekly Public Television series. Previously, he served as Assistant Director of the Institute for Global Studies and before that, as Midwest Regional Director of the National US-Arab Chamber of Commerce. Savage has a Master’s Degree in Middle Eastern Studies from the University of Chicago, and did graduate study at Yarmouk University in Irbid, Jordan. That sort of background, and his wife’s occupation, could make two strikes against him so far as Mr. Trump is concerned. 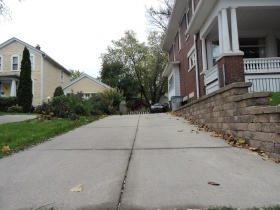 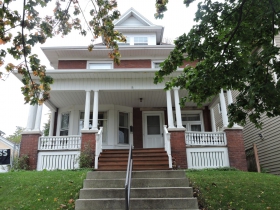 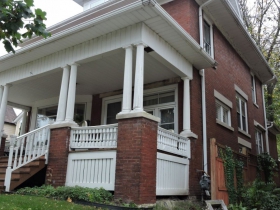 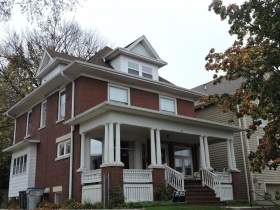 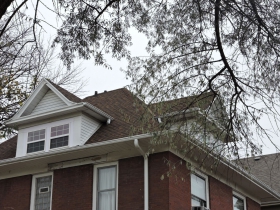 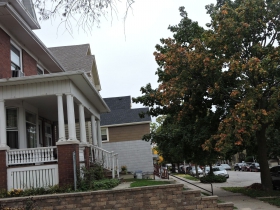 How Milwaukee Is It? The residence is a mile north of Milwaukee City Hall.