Her radical reshaping of state DNR may make her the perfect candidate.

Cathy Stepp. Photo from the State of Wisconsin.

Wisconsin Department of Natural Resources Secretary Cathy Stepp has confirmed to the Journal Sentinel that she’s been discussing joining the Trump administration.

Would she accept an offer?

“Depends on what the job would be,” Stepp said.

I’d written her up in December as a potential US EPA wrecking crew member, but I said it was a long-shot.

…Wisconsinites with private sector, public sector and the right/Right correct partisan and ideological credentials who might rate a look by Trump or his transition team…

Cathy Stepp, whom Walker appointed to run the agency because she had the “chamber of commerce mentality” he wanted to direct his DNR redefinition which continues to be embedded and operate there.

She spoke publicly for Trump during the campaign and has, on paper a resume which might have some appeal, having been a land developer, a Wisconsin State Senator, and high-profile cabinet Secretary for nearly five years – – and is on a first name basis with Elizabeth Uihlein, a major donor to Republicans, Gov. Scott Walker and Donald Trump, as I noted recently.

Stepp might not want to move to Washington, DC, but could be dropped into a spot like Regional Director at the US Environmental Protection Agency Chicago’s office and easily commute there from her Racine County base.

But as it turns out, I underestimated Trump’s depravity and Stepp’s ambition.

Some federal appointees in our Nation’s Capital might want to read up on just who their new boss really is if Stepp gets the job offer she wants from the same Donald Trump she last year pitched to the “ladies” even after candidate Trump’s Access Hollywood tape about kissing and groping ‘ladies’ had aired a million times:

*  You have to start with her own anti-DNR rant back in 2009 that proved to Walker she had the right mentality to run the state’s conservation, clean air and water agency.

*  Them there was the day she turned DNR offices into Halloween treats-and-fun houses.

*  And when she chaffed having to acknowledge state employees’ rights and longed for the good old days when she could move around her McDonald’s workers with more authority.

*  Yet she did get good ratings, from herself, calling herself “uniquely qualified” to run the DNR. 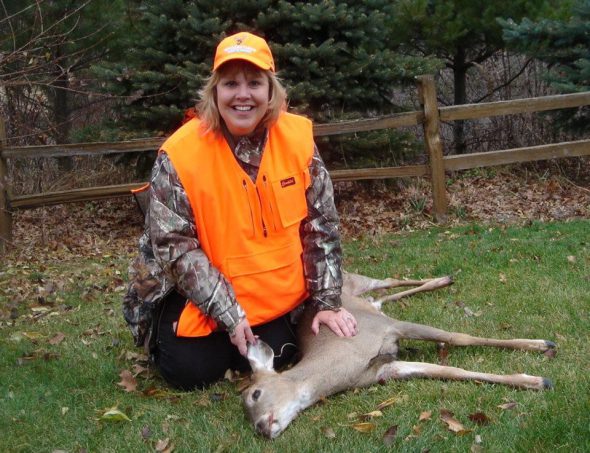 *  Though not everyone liked her posing with a tiny deer she shot.

*  And serving as Walker’s tool to turn the department into a pro-business, pollution-enabling agency.

All of which has probably helped her gain the attention of the Trump administration.