23 states, including Wisconsin, allow ATVs on some roads, increasing accidents.

By Paul Feldman, Wisconsin Center for Investigative Journalism - Aug 10th, 2017 01:16 pm
Get a daily rundown of the top stories on Urban Milwaukee 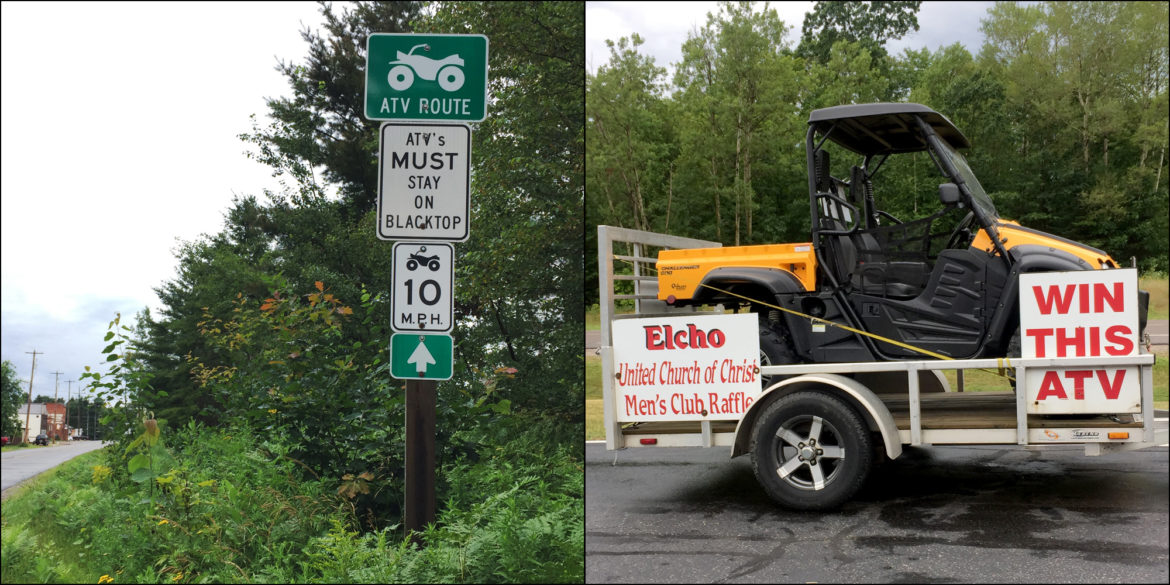 Many communities in central and northern Wisconsin have designated public roadways for off-road vehicle use. Safety advocates warn that about half of all deaths on all-terrain vehicles now occur on roads — even those designated as ATV routes. Photos taken Aug. 3, 2017 in Langlade County, Wis. Photos by Mary Matthias of the Wisconsin Center for Investigative Journalism.

More than 14,000 people, including roughly 3,200 children age 15 or younger, have been killed in crashes of all-terrain vehicles in the United States since federal safety officials began keeping track in the early 1980s.

Studies have shown that over half of the deaths occur on public or private roads — even though ATVs are required to display safety warnings that they are not designed to be operated safely on roads.

But pushed by riders and local business interests, more than two-thirds of the states, including Wisconsin, now allow off-highway vehicles on some public roads, or permit local jurisdictions to allow the use of ATVs — and other off-road machines known as recreational off-highway vehicles, or ROVs — on public roadways.

It is not happening just in rural areas of Wisconsin. This spring and summer, the Juneau County cities of New Lisbon, population 2,600, and Mauston, 4,500, opened up all nearly of their city streets to ATVs and ROVs, also known as UTVs (utility terrain vehicles). A year ago, Eagle River, the “Snowmobile Capital of the World,” did the same thing for its 1,400 residents.

Safety advocates have pushed back again this trend, but they are losing more fights than they win.

“This is an uphill battle,” acknowledged Rachel Weintraub, general counsel of the Consumer Federation of America, which has spearheaded efforts to restrict use of off-highway vehicles on paved, dirt and gravel roads.

The Specialty Vehicle Institute of America trade group says it also sent letters in the past couple of years opposing more than 60 measures in 23 states.

Off-highway vehicles can reach highway speeds but, with their low-pressure tires and high center of gravity, they are prone to tip over or go out of control on roads.

As of July 25, there had been eight fatalities in Wisconsin this year on roads involving off-road vehicles, according to state Department of Natural Resources statistics. Among the eight, five were on roads officially designated as ATV/UTV routes. In 2016, 14 of the 22 fatal ATV or UTV crashes occurred on roadways, eight of them on roads marked as ATV/UTV routes.

In some of these on-road crashes, the ATVs or UTVs rolled over or lost control when drivers took a curve or turn too fast, according to DNR summaries. Drivers also were killed on roads after being hit by a car, another off-road vehicle or a deer or while crossing a U.S. highway while on an ATV route.

Roger Flaherty, president of the Landover ATV/UTV Inc. riding club in Vilas County, said he believes alcohol use and lack of helmets are bigger dangers than riding on the road. He said manufacturers’ cautions to use the vehicles only off road are intended to “cover their liability.”

Alcohol was a factor in at least four of the eight fatal on-road ATV or UTV crashes in 2017, with results pending in the remaining four, DNR statistics show. None of the people killed in those eight on-road fatalities was wearing a helmet. Alcohol has a factor in 11 of the 14 on-road fatal crashes in 2016; 12 of those 14 victims were not wearing helmets.

As FairWarning has reported, while the Consumer Product Safety Commission regulates hazardous products and the National Highway Traffic Safety Administration oversees traffic safety, neither federal agency has authority over where people operate off-highway vehicles, leaving the issue in state and local hands. At the same time, the safety commission has warned that children under 16 should not drive adult-size ATVs and that the vehicles should not be operated on paved roads.

Safety advocates have unsuccessfully urged the commission to expand its warning to include unpaved roads, a position that was bolstered by a 2016 University of Iowa study finding that 42 percent of ATV roadway deaths occur on unpaved surfaces.

“ATVs are designed for off-road use only and multiple factors make them at risk for loss of control on both paved and unpaved roads,” study co-author Charles A. Jennissen wrote in a letter to the commission. 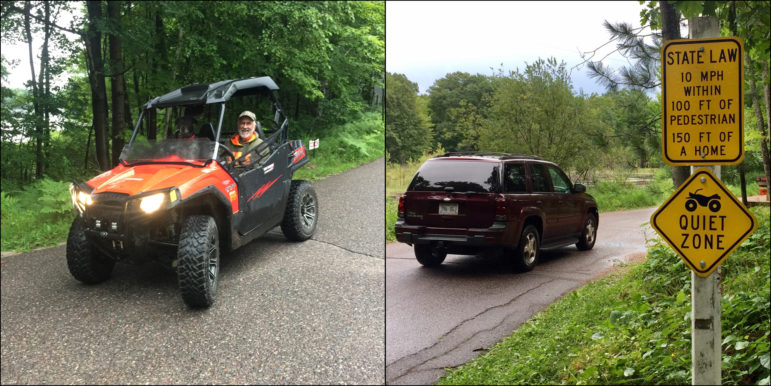 The Specialty Vehicle Institute of America, a manufacturers trade group, takes the position that “ATVs are designed, manufactured and sold for off-road use only.” But a FairWarning review found that leading manufacturers and dealers sometimes have supported groups or made statements that undercut the industry’s official position.

Yamaha, for example, states in its ATV owner’s manuals: “Never operate an ATV on any public street, road or highway, even a dirt or gravel one.” But Yamaha, through a grant program that provided more than $350,000 last year for trail development, maintenance and safety, gave a portion to riders clubs that also fight for opening public roads to off-highway vehicles.

Polaris, which bills itself as the world leader in an industry that annually sells about 400,000 ATVs and 480,000 ROVs, has also provided trail grants to a handful of rider clubs that have pushed for local governments to open public roadways.

Polaris, based in Medina, Minnesota, declined an interview request but, in a prepared statement, said, “Our vehicles are designed for off-road use and should not be operated on public roads, unless they have been marked for off-road (vehicle) use by local or state legislation.” 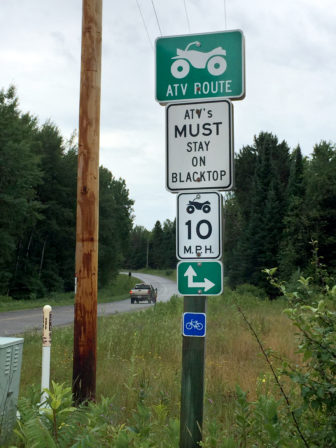 A growing number of Wisconsin communities allow all-terrain vehicles (ATVs) and utility terrain vehicles (UTVs) on roadways. The Consumer Federation of America has advised policy makers not to open streets and roads to off-road vehicles, citing safety concerns. Photo by Mary Matthias of the Wisconsin Center for Investigative Journalism.

In the first half of 2017, the federation sent 28 letters highlighting the hazards to government bodies considering on-road use. That’s nearly as many as in all of 2015 or all of 2016, a response to the stepped up push at the local level by off-highway enthusiasts.

But this year, at least eight governments — including cities and counties in Minnesota, Indiana, Michigan and Wisconsin and the state legislature of Utah — have approved the opening of roads.

Among them was the town of Grant in Portage County southwest of Stevens Point, Wisconsin. In 2016, the town board voted to designate certain rural roads as ATV routes after a public hearing that drew about 100 people.

In June, the board voted 2-1 to expand the route system. The safety federation had sent a letter to town of Grant officials, urging them to oppose the expansion.

Town chairwoman Sharon Schwab cast the lone “no” vote. She said the federation’s concerns, along with manufacturers’ recommendations not to operate ATVs on roadways, influenced her decision.

“We had a plethora of information about the safety concerns,” Schwab said. “The purpose of town government is really to protect, in my view … public health and safety and welfare. In my assessment, this proposal did not pass the smell test.”

Schwab did credit the town with adding restrictions that enhance safety, including banning on-road ATV use after dark, setting a 10 mile-per-hour speed limit near dwellings, people and horses, and requiring everyone under 18 to wear a helmet.

The federation knows of only two communities — Wellsville, New York, and Fripp Island, South Carolina — that decided against opening roadways this year after getting the warning letters.

Nearly 100,000 people are hurt annually in ATV crashes, according to federal figures. Researchers have found that roadway injuries tend to be more serious than those on forest trails and other off-road locations. 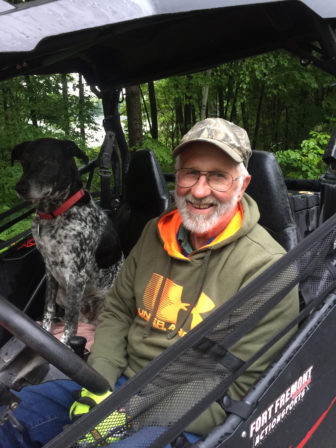 Yogi Antoniewicz along with his dog, Jaeger, enjoys riding on the designated roadway routes in Langlade County in his UTV. But he worries about the safety of young drivers of off-road machines mixing with larger, heavier vehicles. State law allows children as young as 12 to operate ATVs on roadways after receiving safety certification. Photo by Mary Matthias of the Wisconsin Center for Investigative Journalism.

A study published in July by the journal Pediatrics found a more than 10 percent decline in children’s ATV injuries in Pennsylvania in recent years. But the researchers noted that the use of ATVs on paved roads, “especially among adolescents, increases the mortality rate.”

Researchers tend to focus only on ATV injuries because comprehensive statistics are not available for ROVs. However, as FairWarning reported in 2015, hundreds of people have been killed in ROV crashes.

Sales of these vehicles have skyrocketed since their introduction in the early 2000s as an alternative to ATVs. Unlike ATVs, which the rider straddles like a motorcycle, ROVs are more Jeep-like in appearance, have bench seating for two or four riders and include safety features such as seat belts.

Yogi Antoniewicz enjoys riding his two-seater on the designated ATV/UTV roads near his home in the town of Upham in Langlade County. His dog, Jaeger, often comes along. He supports expanding the on-road system to meet popular demand and to give drivers better access to off-road trails.

“The boating laws are enforced pretty well — the ATV laws should also be enforced,” he said.

This story was reported by FairWarning (www.FairWarning.org), a nonprofit news organization based in Pasadena, California, that focuses on public health, consumer and environmental issues. The nonprofit Wisconsin Center for Investigative Journalism (www.WisconsinWatch.org) distributed the story and the Center’s Mary Matthias and Dee J. Hall contributed to it. WCIJ collaborates with Wisconsin Public Radio, Wisconsin Public Television, other news media and the UW-Madison School of Journalism and Mass Communication. All works created, published, posted or disseminated by the Center do not necessarily reflect the views or opinions of UW-Madison or any of its affiliates.

One thought on “More Off-Road Vehicles on State Roads”