Non-Profit Packers Give to Charity

The franchise gives back to state, proving it is really America’s Team. 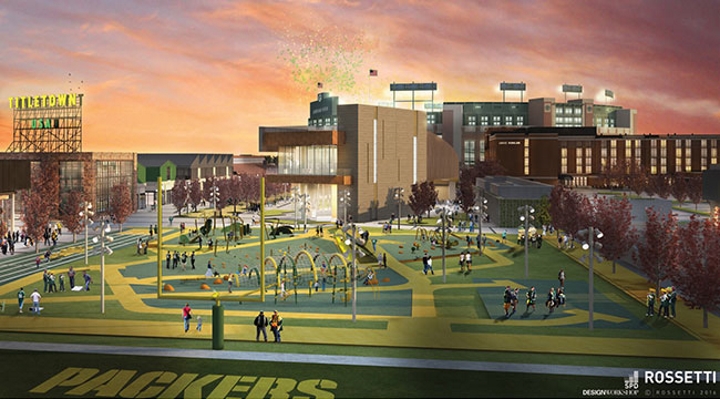 A section of Titletown. Rendering by ROSSETTI.

Are your ready for some Green Bay Packers’ football?

I am especially ready this year because The Packers have stepped up the philanthropic nature of the corporation. The Pack is about more than football. When you buy your ticket, it’s good to know that a slice of that price goes indirectly to a wide number of causes across the state.

Packer charitable donations totaled $1.3 million last year. Its other activities, such as appearances by players, added about $7 million in charitable impact. Many of its gifts went to youth supporting organizations.

In contrast to the big money that puts a taint of greed on the NFL, this dimension of the Green and Gold is a shining exception. It is one more reason to see the Packers as America’s team.

On a similar note, President Mark Murphy also understands that his organization can play a role in economic development. The new Titletown District around Lambeau Stadium is an example, not of charitable giving, but of investment back into the Northeastern Wisconsin economy. It has invested $88 million in the new district and the Johnsonville Tailgate Village.

The district will pull in tourism dollars from all over the country, just like the export of goods and services does. It will create wealth and jobs beyond its football operations. The Milwaukee Bucks are committed to the same kind of development dynamics. Bless them both.

The charitable role is a perfect fit for the Packers, almost a requirement, because they are alone in professional sports as a non-profit corporation. The franchise is even more unique in that it is a stock corporation, to my knowledge, the only non-profit stock corporation in the world.

There are no dividends, no capital gains, no ticket priorities. The 364,000 shareholders do get to vote for the board of directors at an annual meeting. The stock certificate is a piece of community pride.

A non-profit corporation gets a federal tax exemption in return for delivering a public service. That exemption helps Green Bay, the smallest market in the NFL, to stay competitive.

Is delivering champion level football in the NFL a public service? In my biased view, with Packer DNA in my genes, I say yes. Living on the frozen tundra requires diversions, and the Packers are that for Wisconsinites in spades.

That said, the enlargement of the Packer strategy to include charitable, economic and civic leadership bolsters its non-profit status.The Green Bay Packers Foundation was created in 1986, a far-sighted move made for the right charitable reasons, but also one that also serves to protect the tax-exempt status of the football corporation.

The non-profit status had a challenge during the 1949 fundraiser. Packer co-founder and first coach Curly Lambeau had capitalistic ambitions. He and three buddies made a run at converting the franchise to for-profit status and ownership of the team. He lost in a 5-2 vote of the executive committee.

Vince Lombardi left in 1969 and ended up with 5% of the for-profit Washington Redskins, a stake never made available to him in Green Bay.

The board of directors of the Packer astutely resisted those profit-making ambitions.

Even when the going was tough for the franchise, the board hung tough and preserved the Packers as a community asset, the community eventually becoming Wisconsin as a whole.

With the players, executives and the board of the organization taking on a larger role in the well being of the state, beyond football, cheese-headed Packer backers have even more reason to stand behind the team.

It wasn’t always possible for the Packers to be charitable in a major way. The directors, including some very sophisticated business people, correctly determined that the organization needed major reserves to stand up to the multi-millionaires in the bigger markets. It took decades, but the franchise now boasts financial reserves of $349 million.

With those substantial reserves in place, which few teams can match, the board has more latitude for charitable contributions. Out of $73 million in profits last year, it added $5 million to the foundation — after increasing the reserves by $50 million.

The foundation now has $30 million in assets. Expect the philanthropic profile of the Green Bay Packers to become more pronounced in the coming years.

Now, back to football: wouldn’t a 14th championship in February be a fine bookend for a high-class organization off the field.

One thought on “Op Ed: Non-Profit Packers Give to Charity”