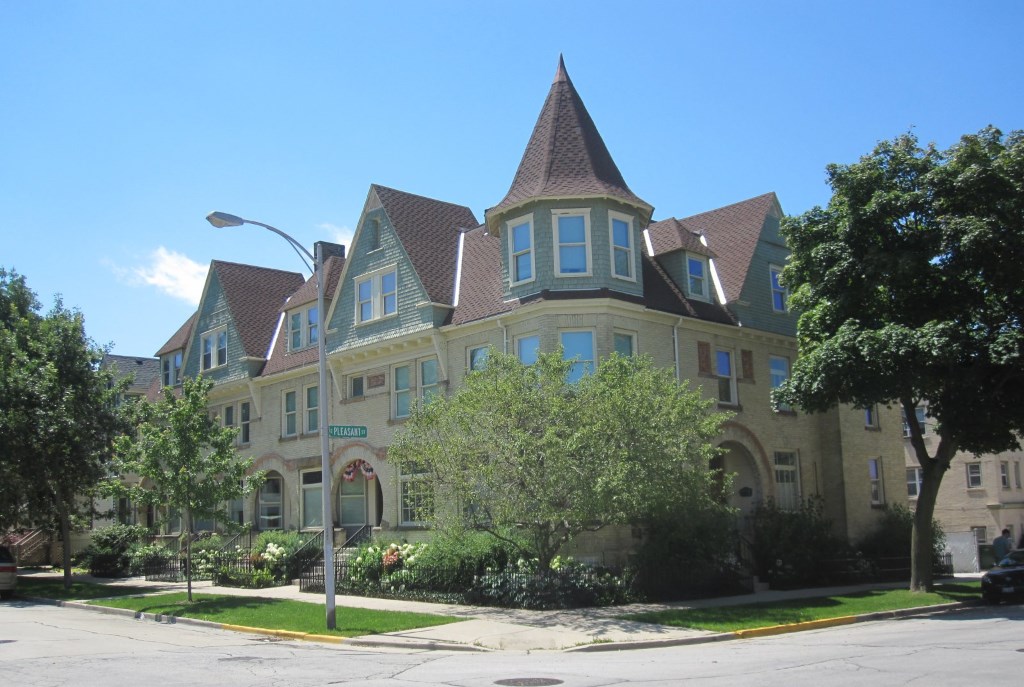 The attached rowhouse was a popular Victorian building type that was suited for middle and upper middle class housing. Although the style was not nearly as popular in Milwaukee as in older cities like Boston, Philadelphia and New York, where entire districts are filled with them, there were a number of such examples in the city, most now lost. Of the 14 that remained in 1977, six have since been been razed, while the four on the South Side and one on the West Side were in poor condition by the early 2000’s.

The principal remnants are in a tight grouping, clustered within blocks of each other. They are Abbot Row (1889), now a co-op soon to be fronted by the streetcar line on E. Ogden Ave., Graham Row (1887), on the northwest corner of N. Marshall and E. Lyon streets, and this fine building, Friedmann Row (1891), located at the southwest corner of N. Cass and E. Pleasant streets.

In the case of Friedmann Row, the architect and mason pulled out some tricks to give rhythm and variety to the facade of what would ordinarily be a bland building. Most notable are the horseshoe openings to the doors of the units, the offset dormers and the prominent corner turret. The Cream City brick exterior is enlivened with occasional snippets of terra cotta and limestone trim.

The building is located on a remarkably intact block of the Lower East Side, just south of E. Brady St. In fact, with the single exception of a lone late 20th century townhouse that replaced a circa 1840s building, this 1891 structure may be the newest one on the block.

Was Built as Investment

This exceptionally attractive 90-foot-by-61-foot building was built at what was then 751-763 Cass St. as an investment for Ignatius Friedmann (1820-1894), who was over 70 when it was built. He paid $17,000 “cash” to construct it, according to the building permit. Friedmann, who spoke Italian, French and German in addition to English and his mother tongue, was an exceptionally educated Hungarian immigrant who came to this country in 1860. Friedmann engaged in the manufacture and wholesale of men’s clothing during a time when the immigrant population was booming. He also made many investments in real estate in Milwaukee and Chicago. Friedmann was worth an estimated $800,000 at the time of his death, ranking him among the ten wealthiest Milwaukee Jews at the time. He was a supporter of the German English Academy, a precursor of the University School of Milwaukee.

The location has always been a densely built and economically integrated neighborhood of mostly single family and duplex residences. Its relatively high elevation assures it of lake breezes when the wind is so inclined. Yet being only a few blocks from the riverfront tanneries, the air could get quite nasty when the southwest winds prevailed. This condition remained well into the late 20th century.

The building was intended for an upper middle class audience at the beginning, and has returned to that status recently after a 60-year turn as a rooming house. But it was a close call. Today’s occupants, no longer renters, own the five condo units it now contains, and include such notables as the Hon. James A. Gramling, Jr., a retired municipal judge who lives in a unit here with his wife, Linda J. Velasco, a retired police lieutenant who, in 1976, was the first Latina hired by the MPD. Gramling has distinguished himself in his retirement life by tirelessly working to restore driver’s licenses for those who have had them revoked for non-traffic reasons.

According to a historic designation study report issued by the city, the Gramlings’ unit had a distinguished roster of early occupants: “William A. Weinstock (1892-1894), a bookkeeper and insurance salesman; Frank Tibbits (1895-1903), president of Tibbits Cameron Lumber Co.; E. Edwin Frank (1907-1909), the general manager of L. Frank & Son Sausage Company; and George H. Ackerman (1910-1915) whose store was nearby on Ogden Avenue.”

Early neighbors included John DuFour, the cashier of the Northwestern Mutual Life Insurance Company, Fred W. Rogers, “the Father of North Milwaukee,” (and platter of South Milwaukee) who rented here despite having extensive real estate holdings of his own, and the Rev. Matthew W. Trenery, pastor of Summerfield Methodist Church. Others in the neighborhood worked in nearby breweries and the small businesses of the area. Many were clerks in offices downtown. To the north the neighborhood took on a scruffier, working-class identity as a Polish village.

By the onset of the Great Depression, the insurance company cashiers and Methodist ministers had been replaced by folks like Matthew Gerhardt, a stationary engineer, John Schoknecht, a hoisting engineer and Mrs. Stella Ramcheck, a leatherworker who was the widow of Charles. Other renters included Thomas C. Wright, a laborer, and Arlie M. Bolich, a shipping clerk at H. Niedeken Co.

By 1935, the units at 1541 and 1543 N. Cass St. were occupied and operated by Mary Carr as furnished rooms. Soon all the apartments were converted into a total of 32 units of furnished rooms. In 1941 owner Kurt Boehm installed a stairway to the basement in the rear of the building, and in 1942 his tenant Mrs. Boling, who was getting on in years, installed a water closet and shower in her first floor unit at 1543. Eventually all butler’s pantries in the building were so converted.

The neighbors included new immigrants from Sicily, who worked as teamsters, produce dealers and laborers. A few had saved up enough money to start businesses of their own.

By 1946 the building was owned by the P. H. Fahey Investment Co., which was to hold on to it for a half century. In March 1950, the fire prevention bureau of the Milwaukee Fire Department sent around an inspector who was horrified to find “people living on the 3rd floor with one means of exit.” By March, 1952 the needed escape, built by Parker’s Welding Shop at a cost of $900 was approved by the inspector. The entire ceiling of the basement was plastered as a fire prevention measure, and four self-closing steel doors were added. You just can’t be too careful in a rooming house when it comes to fire.

On November 15th, 1953, the fire escape was put into use when a blaze in the southwest corner of the building started on the third floor. “Cause unknown,” the inspector noted. Two years later, nine chimneys were considered defective above the roof line. “Only two chimneys are in use at this time,” according to the report. (Six offending chimneys have since been removed, and the others repaired.)

In 1957, owner John Randall Meyer enclosed the stairways to the third floor, yet another fireproofing measure. He also had some work done on the rear of the building. This did not please the inspector.

In 1965, there was no protective guard rail provided at the lower platform of the fire escape. So, you could escape the flames and the smoke, make it out of the building and still plunge to your death.

The building was plagued with broken windows, debris, casual electrical wiring and a host of violations that were brought to the attention of J. R. Meyer, President of Fahey Investments. He was ordered to clean it up.

The neighborhood was severed from its Yankee Hill neighbor when a block wide swath between E. Ogden Ave. and E. Lyon St., running all the way from the Milwaukee River to the lake, was demolished for a freeway that was never built. This was a transitional block between Yankee Hill and the more modest block that holds Friedmann Row. The area was isolated, and the neighborhood declined. Brady Street became the hotbed of the underground, and hard drugs abounded.

Things were looking grim for the rooming house in February, 1991, when the owner was charged with “occupancy in continuing violation of city ordinances.”

By May, 1993, the structure was owned by Steve Elkind, who announced his plans to convert the rooming house back to its original five family state. The block to the south was being developed as part of East Pointe Commons, which stitched the neighborhoods back together again.

From Rooming House to Condos

I lived across the street during this time, and had a front room view of the activities before, during and after the renovation. Although the rooming house residents seemed sketchy, the crew that hauled out the junk from within struck me as even more so. Each night I would go through the debris, and got myself a rather eclectic collection of rooming house furniture in the process, including a dresser painted in a ghastly flat green paint. My once spartan decor was transformed overnight from merely shabby to shabby chic.

(I later sold the collection to a country music star who was then appearing at Summerfest. She had her roadies load it up on the tour truck, while she visited with me on my porch.)

The developer hit a snag in 1993, when his plans were deemed not in compliance with accessibility laws. He requested and received a variance from requirements for an accessible entrance and first floor powder room, “because of the unique and unusual characteristics of this site.” He said the chance that a handicapped person would want to purchase a unit would be “extremely remote.”

Elkind added, “This property had fallen into gross disrepair and I am bringing back a unique architectural treasure that will enhance the local area and reflect pride back into the community.”

After operating the structure as a rental property for a number of years, Elkind sold the property as five separate condominium units, including the unit now owned by Gramling and Velsaso, who purchased it on July 7th, 2000 for $182,500. The complex is now known as Patrician Row Condominiums, signaling its return to the high status of years past, and has an association, dues and bylaws. There has been a modest turnover of the other four units, but no rooming house furniture makes it to the curb any more.

About James A. Gramling, Jr.

James A. Gramling, Jr. is a retired City of Milwaukee Municipal Court Judge who served from 1986 to 2007. He received his law degree from the University of Wisconsin in 1971, and has engaged in a career of public advocacy law. His most recent efforts have been toward reforming the state’s driver’s license forfeiture laws, arguing that they unfairly target the poor for whom licenses are essential for work purposes. Gramling is also active in political circles and is a frequent canvasser for progressive candidates. 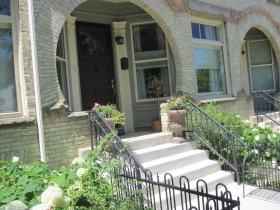 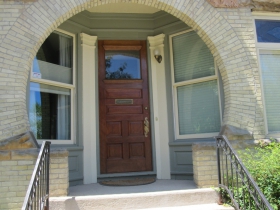 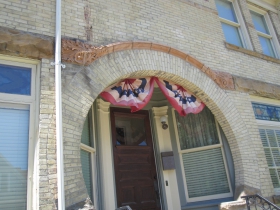 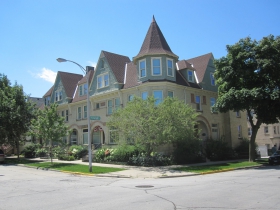 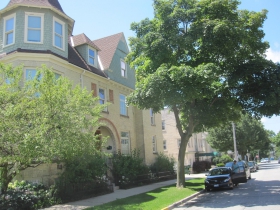 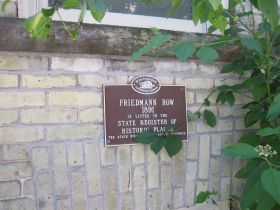 For additional information, please see the 1894 and 1910 Sanborn Digital Maps of the property. The City of Milwaukee has a Historic Designation Study Report of the property, and it appears in the Wisconsin Architecture and History Inventory, and National Register of Historic Places.