Company had violated residents preference program, will count employees at other projects. 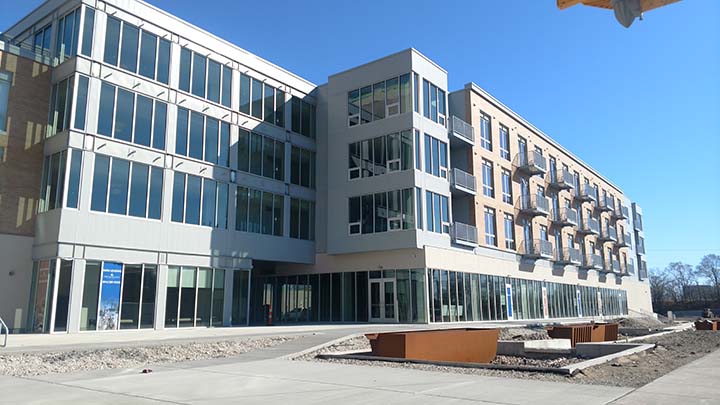 Wangard Partners, Inc. has been in hot water with city officials for some time, criticized for failing to meet requirements of the Residents Preference Program (RPP), as Urban Milwaukee has reported.

But a solution was approved this week at a meeting of the Common Council’s Zoning, Neighborhoods & Development (ZND) Committee and will next go before the full council.

The problem for Wangard, a busy developer in Milwaukee, has involved its Freshwater Plaza Apartments project, a four-story building with 76 apartments and more than 16,000 square feet of retail space getting built in Walker’s Point. Because the $44 million development received more than $4 million in public financing, the project must have 40 percent of the total hours worked by Milwaukee residents certified under the RPP program (all projects getting at least $1 million in public financing must meet RPP requirements). But Wangard has fallen well short of the 40 percent threshold, with just 22 percent of all hours worked by RPP-certified workers. Under the city law, when a developer fails to meet the RPP requirements, public funds earmarked for the development will be withheld by the city.

Under the solution approved at the ZND committee, Wangard would be able to count hours worked by RPP-certified workers on its other (non-RPP-restricted) projects in the metro area.

RPP workers are Milwaukee residents certified under the program as having not worked in the last 15 days, or worked less than 1,200 hours in the last year, or any individuals who meet federal poverty guidelines. The rule aims to capitalize on Milwaukee’s development boom to train unemployed and underemployed Milwaukee residents in the trades.

“With any contract there’s the spirit of the contract, and we fell short of that,” said Stewart Wangard, CEO of Wangard Partners. “We feel that we have complied with contractual obligation, and yet, that’s something that should be set aside, because the spirit is what we’re really trying to go and get done here.”

Wangard told the committee they had his “personal assurance” and the “company’s assurance” that they would meet the goals from here on out.

The firm will be using RPP hours worked on the Laacke & Joys redevelopment (the new Bader Rutter headquarters) at 1433 N. Water St., the Retreat at Prairie Park Apartments in Oconomowoc and the Milwaukee Tool headquarters expansion in Brookfield.

The Freshwater Plaza project involves two phases of construction. The first phase involved developing a mixed-use retail and residential building, and during this time the project consistently failed to meet its goals. For the next phase the developer is constructing two retail outbuildings on the site, and for this has agreed to maintain 42 percent RPP on the project, said Michael Cockroft, a construction project manager for Wangard. Along with the 42 percent, they will also be allowed to count the hours worked by 11 Cermak Fresh Market grocery store employees towards their RPP requirements.

Freshwater Plaza has been missing their RPP goals by 18 percent. The deal that has now been proposed has them employing a bit more than is needed to fill that 18 percent gap. Cockroft said the new arrangement projects Wangard will have 9,331 RPP hours towards their requirements, which should put them at just short of 44 percent, or four percent above the requirements.

The ZND committee approved the deal unanimously. It will next go before the full Common Council for its approval.

“My goal, and I think the goal of the Common Council and the Mayor is to actually have residents of the City of Milwaukee doing construction in Waukesha County and Ozaukee County, Washington County,” said Ald. Jim Bohl, chairman of the committee, “And bringing the paychecks back to the city of Milwaukee.”

3 thoughts on “New Deal for Wangard on City Hiring”