The Land of Single Family Homes 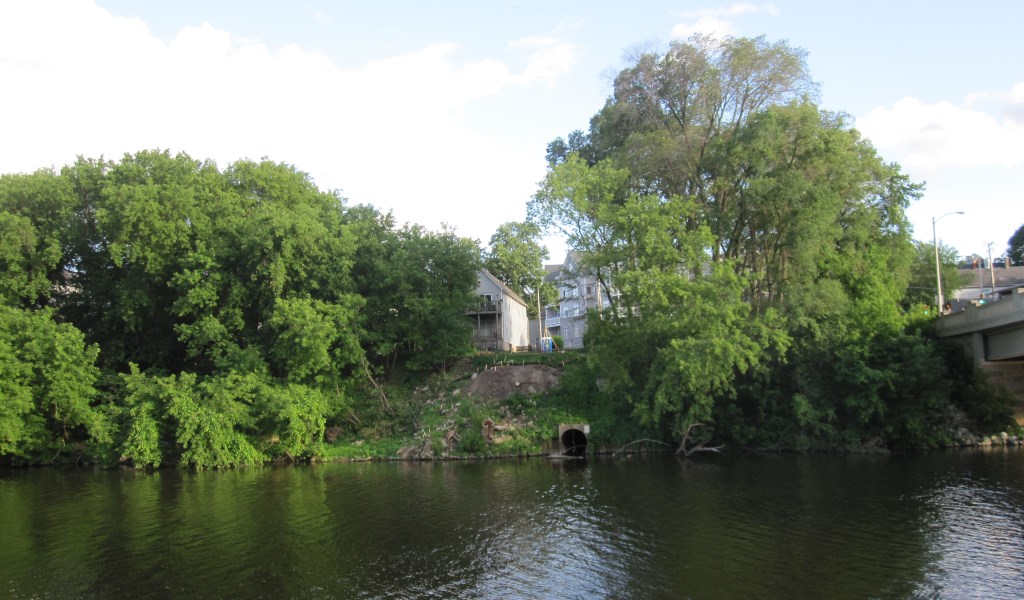 Construction of a single-family home along the Milwaukee River. Photo by Michael Horne.

Milwaukee’s recent riverfront residential development is usually built on former industrial, and often vacant properties. The resultant large projects are commonly assailed in reader comments as being “cookie-cutter,” “boxy” and “too large.”

However, one stretch of prime real estate on the river may escape such large-scale development, due to quirks in geography and existing land uses.

In fact, the 17 lots on the riverfront stretch of E. Kane Pl. in the 1100-1200 blocks have seen the completion of seven new single-family homes over the past decade, with two more on the way. This in an area just blocks from much larger development. 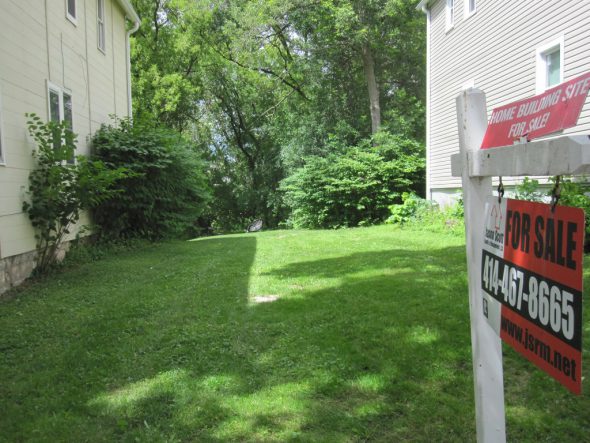 The most recent plan working its way through the approval process is a home designed by Johnsen Schmaling Architects which is to be constructed for Godfrey & Kahn attorney Jason Kuwayama on a city-owned lot at 1128 E. Kane Pl.

Kuwayama said he hopes to begin construction this month. His proposed residence is two doors (and one vacant lot) to the east of a new $700,000 home on the site of what had been a rear duplex set back on the lot at 1114 E. Kane Pl. for David C. and Kay L. Rolston. David Rolston is the CEO of Hatco, a manufacturer of professional restaurant equipment. The Rolstons also received a BOZA variance in May similar to the one received by Kuwayama. 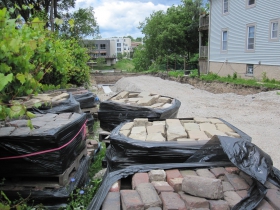 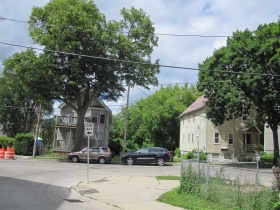 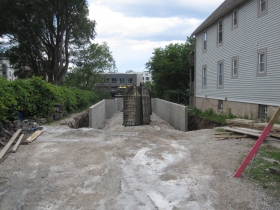 Also this spring, a single-family home at 1170 E. Kane Pl. became the final unit to be constructed in Kane Commons, a planned unit development that dates to 2008.

Kane Commons itself was born as a reaction to earlier proposals to develop a large apartment building on two adjacent lots, one of which was city-owned.

Julilly Kohler then bought the west lot of the proposed site, with two four-family residences and one cottage. After a protracted ordeal that even included a Federal Civil RICO case, Kohler purchased the adjoining city-owned lot and developed Kane Commons. It consists of three riverfront single family homes, two courtyard single family homes, and two single family homes located on the street frontage of the 150-foot-deep lot. An existing four family was converted into a three family condominium, and the cottage and other four family were razed for the new construction.

Why So Many Single Family Homes on Prime Real Estate?

Why does this stretch of Kane Place buck the trend toward large riverfront developments? Part of the reason is due to the neighborhood’s existing land use of mostly duplexes on very narrow and very deep lots. Any developer who would try to assemble a property of the contiguous 100 front feet or so necessary to build a large structure would have to negotiate with four or five owners for the land, which always bids up the price, and then go through the expense of demolishing the existing residences. The homes there are a mix of owner-occupied and rental units, and usually both in one.

Although such a combination of properties may have been possible in the past, there was little interest in so doing. Most passersby would not even know that the river flowed behind the homes here, and there are streets without rivers behind them that give off more of an air of gentility. This area was built for poor people, largely because the river was a literal sewer until well into the 20th century. The surrounding industrial area, with an abundance of tanneries, also lessened the appeal of the neighborhood.

That changed with improvements in water quality, the removal of the dam in the late 1990s and, significantly, the development of Kane Commons — especially its three deluxe riverfront homes. 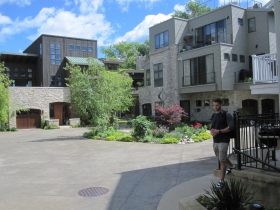 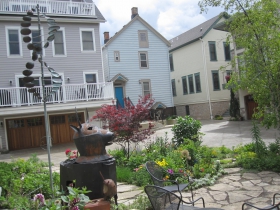 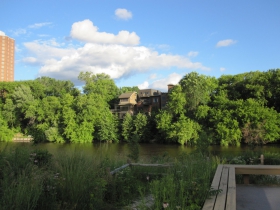 All of these measures emboldened new owners to construct single family homes on the revitalized river, adding millions of dollars in value to the street, and returning at least two city-owned lots to the tax rolls. A brief moratorium on development occurred due to the Great Recession. For a period of time, the area was also subject to a Zoning Overlay District designed to limit large developments, and since repealed.

With the street landscape on the block soon to be dotted with luxury homes cheek-by-jowl with modest frame duplexes, it will be even more difficult in upcoming years for a developer to assemble a large parcel here, although we are likely to see the old duplexes give way to new luxury single family homes.  One exception might be the considerable open space that surrounds the Riverview tower, the only large building on the street. This “Pillar in a Park,” developed in the 1960s by the Housing Authority of the City of Milwaukee, includes acres of surrounding grounds, including some prime riverfront property that could be developed perhaps in a town house style, as was once proposed in a UW-Milwaukee architecture project.

Ogden Multifamily Partners L has assembled two properties and has received approval to build a five story, 30-unit apartment building on a 10,000- square-foot lot it bought for $375,000 in 2016 at 910-120 E. Land Pl. The property is at the terminus of N. Marshall St. and will have some views from its lofty perch atop a bluff.

The first order of business was the demolition of a 1949 cinder block garage building on the site that had recently been the home of a florist/landscape firm, and before that The Shop, a motorcycle repair facility. 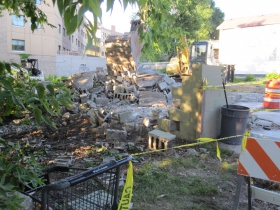 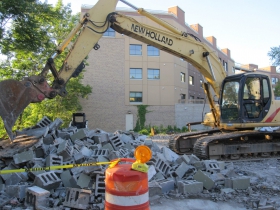 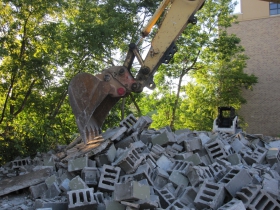 Michael O’Connor of Dominion Properties expanded his namesake firm with the recent purchase of the building that houses the Y-NOT II, 706 E. Lyon St. The nearly 100-year-old building was long owned by the Eichenbaum family. It has 30 units above as well as the bar, a laundromat and a car wash. (This place must come with quite a water bill.)

O’Connor said the property has great potential. It will be visible from the streetcar as well. Two first floor residential units at the east end of the building occupy what was once a storefront, and O’Connor said he would consider reconverting them. I would put the laundry there, giving it access to the apartments above, and expand the Y-NOT II to the prime corner now occupied by the laundromat. The car wash would make an excellent microbrewery or beer hall. The building has been well maintained over the years, but has not been significantly renovated.